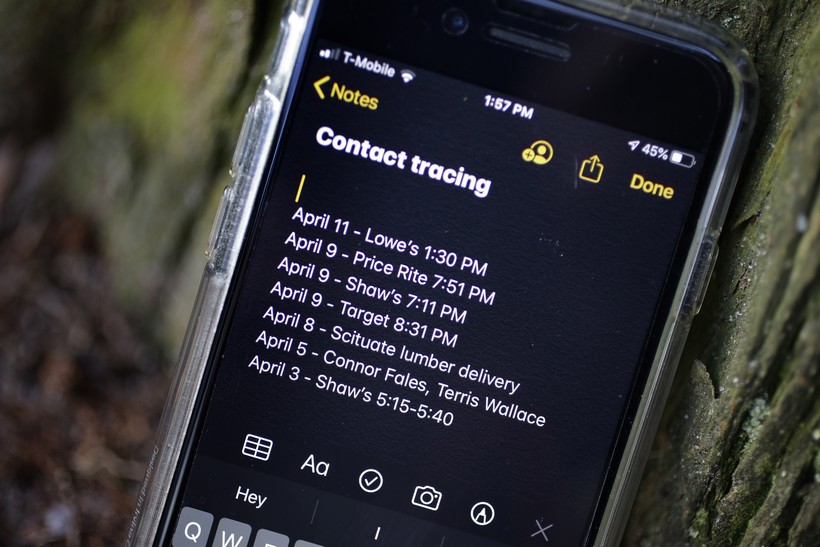 A smartphone belonging to Drew Grande, 40, of Cranston, R.I., shows notes he made for contact tracing Wednesday, April 15, 2020. Grande began keeping a log on his phone at the beginning of April, after he heard Rhode Island Gov. Gina Raimondo urge residents to start out of concern about the spread of the coronavirus. AP Photo/Steven Senne

507 People Have Died From New Coronavirus In Wisconsin So Far
By WPR Staff
Share:

There are 14,877 positive cases of COVID-19 in Wisconsin as of Saturday, according to the state Department of Health Services. That's an increase of 481 cases from the day before.

According to health officials, 507 people in Wisconsin have died from COVID-19 as of Saturday afternoon.

DHS reported 179,329 negative tests for the new coronavirus, an increase of 6,626 from Friday to Saturday.

As of Saturday, 58 percent of people who have tested positive for COVID-19 have recovered, according to DHS.

Wisconsin's daily testing capacity has grown from 120 available lab tests in early March to 14,153 as of Friday. The surge in new tests is one reason for the increase in positive cases. The percentage of positive tests went from 8 percent Wednesday, down to 5 percent Thursday, rose slightly to 5.1 percent Friday, and rose to 6.8 percent Saturday.