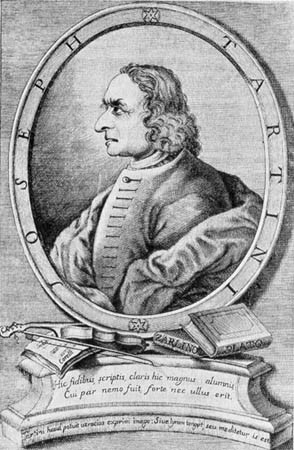 For centuries the violin was been thought of as an instrument of the devil.  In 1770 the English music historian Charles Burney came across the remarkable story of "the Devil's Trill."

Burney's primary interest was contemporary music, and he was disappointed to arrive in Padua a few months after the death of the city's famed composer, Giuseppi Tartini.  But from Tartini's friends Burney pieced together a profile of the composer.  The recollections included the strange story of how Tartini had come to write his celebrated violin sonata known as "The Devil's Trill."

According to Tartini, he dreamed one night in 1713 that he had made a compact with the Devil, who promised to be at his service on all occasions.  [And during this dream his wishes were anticipated and surpassed with the assistance of his new servant.  Finally,] he imagined that he presented the Devil his violin in order to discover what kind of musician he was.  To his astonishment, he heard the Devil play a solo so singularly beautiful, with such superior taste and precision, that it surpassed all the music that he had ever heard or conceived in his life.  Tartini was breathless with admiration.

Awakening, Tartini seized his violin and tried desperately to recreate what he had just heard, but in vain. Then he composed a piece that may be his very best work.  He called it the "Devil's Sonata," but it was so inferior to what his sleep had produced that he declared he would have broken his instrument and abandoned music forever if he could have subsisted by any other means.

Apparently Tartini did get over his brush with the devil because he went on to perform and compose violin music for another 57 years. Charles Burney, the possessor of a keen, analytical mind, dismissed the devil story.

He said that it shows how much Tartini's imagination was influenced by his powers of composition.