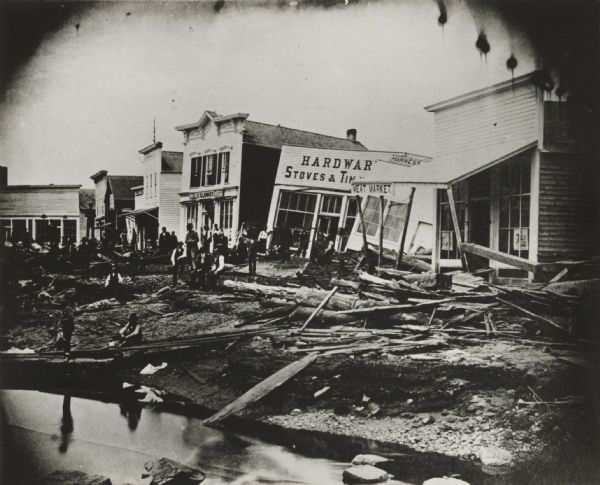 This summer has been particularly rainy in Wisconsin, resulting in extensive flooding in some parts of the state. Wisconsin’s abundance of rivers and lakes has meant flooding has long been a part of life in Wisconsin.

One of the first written records of flooding was made by early French residents of Prairie du Chien who recalled 1785 as "l'anne des grandes eaux," or "the year of the great waters." Several towns along the Mississippi River in what is now Illinois and Missouri were completely submerged by the water. It was the first of at least 40 major floods in the Prairie du Chien area.

Flooding disrupted railroad service in La Crosse in June 1880 when the Black and Mississippi rivers rose over their banks. Rising waters on the Wolf River swept away bridges at Keshena, Belle Plaine and Shiocton.

The Fox Valley saw its worst flooding in 1880, when the Lewiston levee on the Wisconsin River gave way, pouring water into the Fox and leaving Portage completely surrounded by water. The levee broke again in 1881, sending the Wisconsin River into the headwaters of the Fox River, submerging Fond du Lac, Oshkosh, and Neenah.

One of the most destructive floods in state history hit the Chippewa Valley in 1884.

A cyclone swept through the area Sept. 9, 1884, bringing 14 inches of rain in 24 hours. More than 400 million feet of logs broke away from lumber yards and were swept down the Chippewa to the Mississippi River, knocking out nearly everything in its path. Nineteen of the 20 bridges over the river were washed away along with at least 150 houses in Eau Claire.

The damage would have been worse had a log jam not formed about a mile and a half north of the city. Still, the destruction was tremendous.

"Drunken houses toppled over in the streets, logs and other misplaced objects piled up heterogeneously everywhere, vast stretches of standing water amidst which stores and houses appeared like islands and heaved up sidewalks on the incline," reported the Chippewa Falls Independent. One mother held her small child above her head in the raging waters for three hours until they were rescued.