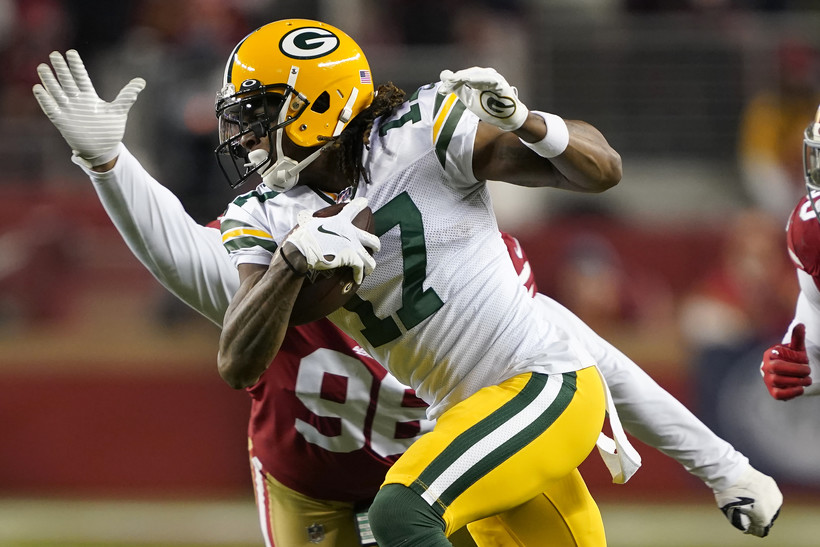 On Wednesday, The Packers Announced There'll Be No Fans At Lambeau Until 'Virus Numbers Subside Substantially'
By Megan Hart
Share:

The Green Bay Packers are set to take on the San Francisco 49ers Thursday night despite positive COVID-19 tests this week for both teams.

Linebacker Kamal Martin and running back Jamaal Williams were added to the list Tuesday. They’re both sidelined due to contact tracing.

"It's unfortunate. That's why we talk to our guys about just making sure they keep their distance," head coach Matt LaFleur said at a Tuesday evening news conference.

The team hosted its player meetings virtually on Monday, according to a news release from the Packers. Otherwise, Green Bay prepared for Thursday’s contest as usual, LaFleur said.

But the fate of the game was called into question Wednesday when the 49ers announced one of their own players received a positive coronavirus test result and the team closed its practice facility.

On Wednesday afternoon, Pelissero also reported that Thursday’s game is on as scheduled despite this week’s coronavirus news from both teams.

The #Packers-#49ers game remains on as scheduled Thursday night — and that shouldn’t surprise anyone. Contact tracing underway in SF and next COVID-19 test results back in the morning. This is how the protocols work. @nflnetwork pic.twitter.com/2bcjGHWeT2

"It is important to note that public health officials have said we can make a difference relatively quickly by strict adherence to wearing masks, socially distancing and practicing proper hand hygiene," team President and CEO Mark Murphy said in a statement.

Both Teams Are Shorthanded

Green Bay's starting running back Aaron Jones missed the last two games with a calf injury. His status for Thursday is uncertain.

With Williams and Dillon unavailable, Tyler Ervin and practice-squad player Dexter Williams will be in the backfield for Green Bay.

"Those guys work hard, and they've been a part of our system now for over a year, and they know what the expectations and the standards are," LaFleur said.

There were 20 players on the Packers' injured list for Week 9, including tackle David Bakhtiari. Linebacker Christian Kirksey is expected to return soon from the injured reserve.

It's A Rematch Of NFC Championship

Packers fans won't soon forget the last time the teams matched up. The 49ers trounced the Packers on their way to last season's Super Bowl, where they lost to the Kansas City Chiefs.

Coming into the season, one of the big questions facing the Packers was whether their run defense had improved. So far, they’ve struggled in the area.

In last weekend's loss to Minnesota, Vikings running back Dalvin Cook became the first player to ever score four touchdowns and exceed 200 yards from scrimmage against the Packers at Lambeau Field.

After that game, LaFleur said Green Bay needed to improve its run defense and do it fast.

"I think a lot of it is mental. It's knowing what your assignment is and then filling the correct hole," he said.

The 49ers certainly aren’t as strong of a team as they were last season. But Green Bay hasn’t beat San Francisco since October 2018.

"We’re going to have to be on top of our game," LaFleur said.

Packers Are Idle At Trade Deadline

Before the trade deadline, Green Bay considered making a play for Houston Texans wide receiver Will Fuller, LaFleur confirmed Tuesday. He’s not sure how far the deal got before it was scrapped, he said.

"My focus was solely on the San Francisco 49ers," LaFleur said.

The Packers are lucky to have a No. 1 receiver in Davante Adams when lots of teams lack a wideout of his quality, LaFleur said Sunday. But Green Bay could definitely use another threat at the position.

Reports even emerged that there was conflict between LaFleur and general manager Brian Gutekunst when it came to the possible trade.

"We're in constant communication. We're on the same page, and there is no truth to that. I can promise you that," LaFleur said Tuesday.