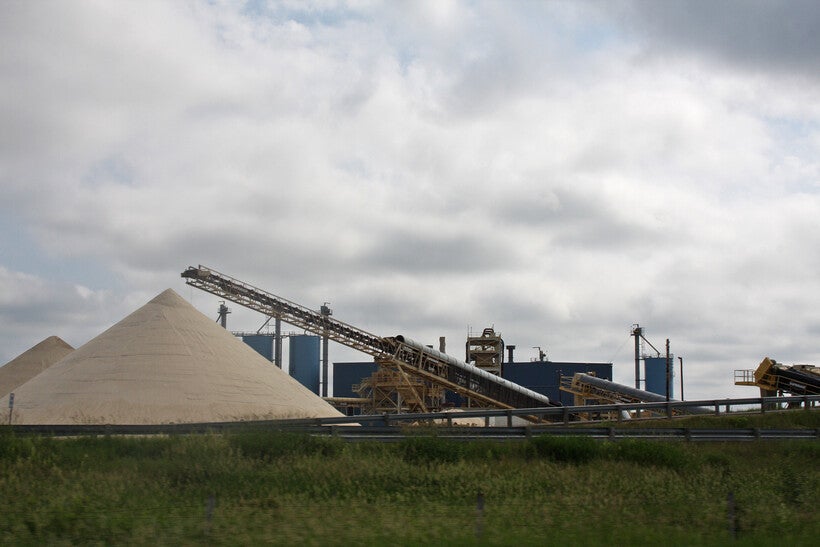 Russian invasion of Ukraine is contributing to oil prices surpassing $100 per barrel for first time since 2011
By Rich Kremer
Share:

Despite oil prices reaching highs not seen since 2011, analysts say they don't expect shuttered frac sand mines in Wisconsin to spring back to life anytime soon.

The ongoing Russian invasion of Ukraine and a myriad of international sanctions levied against Russian government officials and oligarchs have helped push oil prices above $100 per barrel. As of Wednesday afternoon, the price for a barrel of West Texas Intermediate, or WTI, crude oil reached $112.18.

The last time oil prices were that high was June 2011. At that time, Wisconsin was in the midst of a major industrial sand mining boom with companies from around the United States rushing to build new sand mines, processing facilities and railcar loading facilities to supply hydraulic fracture drilling for oil and gas in places like Texas.

Between 2011 and 2014, oil prices generally stayed between $80 and $100 per barrel and Wisconsin's sand industry grew from less than a dozen industrial mines to more than 100 permitted operations across western Wisconsin.

In 2015, the price of oil fell rapidly and hovered between $50 and $70 per barrel. Then in 2017, Wisconsin sand mines began facing stiff competition from a frac sand mining boom near busy Texas oilfields. Oil and gas companies quickly switched and began using what is known as in-basin or regional sand to save on shipping costs from Wisconsin. This led multiple Wisconsin mines to idle operations and some companies, like Texas-based Emerge Energy Services to file bankruptcy and restructure operations.

But despite oil prices once again reaching the $100 per barrel mark, Thomas Jacob, a senior analyst for Rystad Energy, said the analytics firm doesn't expect any sudden surges in frac sand demand. He said that's due to multiple factors like supply chain bottlenecks and labor market tightness in the U.S. proppant industry.

"So, I think for 2022, given all of the constraints that we have, there is a cap on that, right?" said Jacob. "So, that's the reason why we aren't saying everything's going to jump up by 30 percent, 40 percent."

In November, Rystad Energy projected national frac sand demand for this year would reach about 99 million tons. Jacob said in light of the war in Ukraine, they've since revised that to around 109 million tons. He said the firm expects around 35 million tons of that sand will come from Wisconsin.

Jacob said if oil prices remain between $90 and $100 per barrel for a prolonged period of time, energy companies could decide to drill more oil wells, which would mean more demand. Still, he said, new sand mines are being pursued in Texas.

And even if industrial sand companies want to reopen mines that have been shuttered for the past two years or more, it may not be easy to convince workers they'll be around long term.

"So, for them to bring back those folks, I think that's a challenge," said Jacob.

According to the report, the oil and gas industry began to rebound in the fourth quarter of 2020 as COVID-19 vaccines became more available and travel restrictions eased.

"We have seen an increase in the volume of sand sold since the global economy began reopening, however the prices of frac sand have continued to be depressed due to overbuilt capacity and we cannot predict when frac sand prices will increase or stabilize," the report reads.

Kent Syerson is a geology professor at the University of Wisconsin-Eau Claire and a consultant for industrial sand mining companies. He told WPR while a sudden resurgence of idled Wisconsin mines doesn't seem likely, he's read reports of more rail cars with what is called "northern white" sand going to the Permian Basin of western Texas and southeastern New Mexico.

"Every extra train is an extra hour that's worked up here, perhaps more royalties for property owners, etc.," said Syverson. "So, it makes a big difference up here just to keep those plants operating at a higher capacity level."