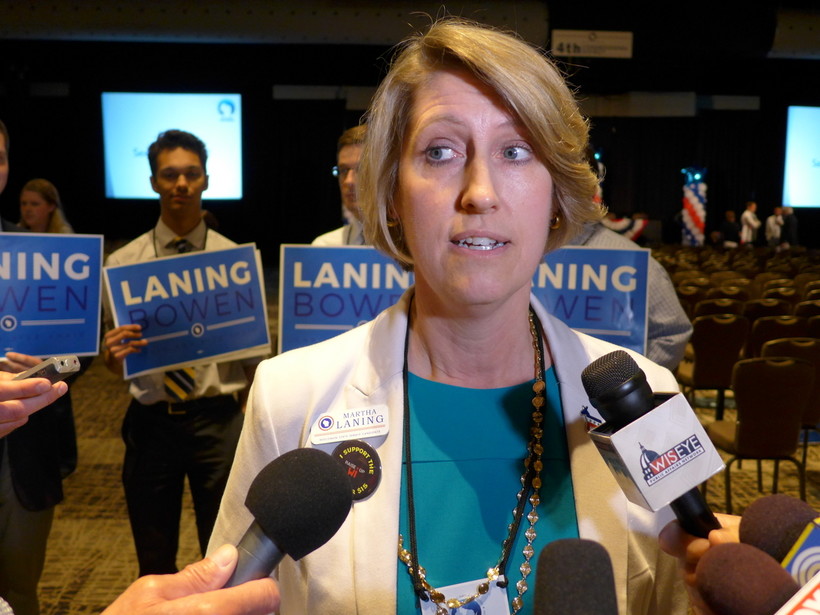 Martha Laning speaking to reporters at the state Democratic Party convention on Saturday.

Laning Will Take Over During Challenging Times For Wisconsin Democrats
By Shawn Johnson
Share:

Laning received 53 percent of the vote from delegates at the state Democratic Party of Wisconsin State Convention in the four-way race to succeed outgoing Chairman Mike Tate. She said she’d use the job to grow the Democratic bench and bring the party back to its grassroots.

A total of 1,349 delegates cast ballots at the annual convention in Milwaukee. Party spokeswoman Melissa Baldauff said that’s the highest delegate turnout in at least the past two decades.

Laning ran an unsuccessful race for state Senate in 2014. During her race for Democratic Party chairperson, she touted her fundraising experience, which includes raising $4 million for a Sheboygan community center.

Laning is taking over during a challenging time for Wisconsin Democrats. While the party fared well in high-turnout races for president and U.S. Senate in 2012, it has been decimated at the state level. Republicans grew their legislative majorities in 2014, and Gov. Scott Walker won his third statewide election in four years.

Laning said she saw opportunities for Democrats because the public was souring on Walker’s agenda, noting the recent drop in Walker’s approval rating.

"What’s really key here is that we’re seeing the house of cards that the Republicans have built falling," she said.

While convention speeches were cordial, this was a race marked by aggressive mudslinging behind the scenes. Laning said it was her job to reach out to Democrats and mend bridges.

"The only thing that the Democrats care about is bringing back the proud progressive values that our state has a rich tradition of," she said.

Laning said she would work full-time and take a salary as state party chair. She said she’d reach out to members of the party before deciding on any staff changes.