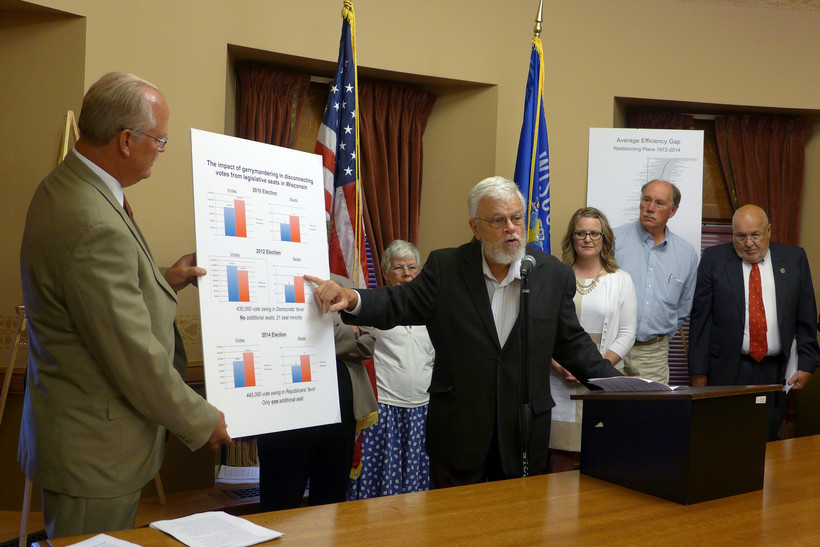 William Whitford, center, and other plaintiffs speaking about their suit Wednesday.

The suit, filed in a U.S. district court in Madison Wednesday, claims the map drawn in 2011 is unconstitutional because it violates a voter's right to equal protection and free speech.

According to the suit, the map guarantees the Republican Party's control of state government. One of the voters filing the suit, William Whitford, said the current maps packed Republicans into a few districts and dispersed Democrats into districts where they had no chance of winning. "The current apportionment has made it impossible for the Democrats to gain a majority in the Assembly, even when Democratic candidates receive a majority of the votes statewide," said Whitford. "This is not how a democracy should work, and it needs to be fixed."

The suit calls on the court to fix the problem by requiring that districts be drawn that don't give either party an unfair advantage in winning a majority in the Legislature. Lawyers filing the suit said they expect the case will be decided in the U.S. Supreme Court.

The impetus for the suit comes from the results of the 2012 election, when Republicans won a 21-seat majority in the Assembly despite the fact that Democratic candidates received more than 200,000 more votes. The suit proposes to fix that by using a formula for measuring how fair each district is — something the Supreme Court has asked for in past redistricting court battles. The formula measures a so-called "efficiency gap" by determining how many votes are wasted when a party has an unfair advantage and dividing it by the total number of votes each party needs to win a seat.

Former Republican state Sen. Dan Theno said a fix is needed because the current system results in the election of more extremist candidates who will pass extremist policies.

"The end result is that when the liberal Democrats and the conservative Republicans get together at the state Capitol, or at our national Capitol in Washington, they have no commonality of interests and that makes for almost impossible bipartisan cooperation," Theno said.

"There’s something horribly amiss in our politics when our elected representatives are choosing their voters rather than the voters choosing them. And they seem to be arrogant and out of touch with what the public wants," Schultz said.

According to former Democratic Sen. Tim Cullen, the current system creates a situation where candidates in the majority party don't need to worry about the general election. They only have to worry about their party running a more extreme candidate against them in a primary if they don't toe the party line.

He said that means "you better vote with the team, make sure your base is pleased, and the heck with the rest of the people because you don't have to worry about them in a gerrymandered district."

To take on instances of blatant gerrymandering, Schultz said that a lawsuit is an appropriate tool.

"(When) the will of the electorate is ignored, there has to be a way of getting around legislators who hold all the levers of power, and that way is the third branch of government, the judicial branch," he said.

Such a case is not without precedent in Wisconsin. Separate 2012 litigation led a three-judge panel to redraw two Assembly districts and reprimand Republican lawmakers for drawing their new maps in secret. The panel determined that two districts on Milwaukee’s south side violated voting rights of Latinos there.

Wednesday's suit will be heard initially by a three-judge panel and then go on the U.S. Supreme Court. Plaintiffs filing the suit hope it will be decided early next year before spring elections in 2016, so that new maps can be used in both the spring and fall.