The eight Democrats vying to win the August primary and face Gov. Scott Walker in November were vocal about their intentions to strengthen local governments during a candidate forum in Milwaukee on Friday. Candidates laid out their plans for boosting economic development and improving transportation across the state.

More than 200 people attended the event, which comes roughly two weeks before the Democratic primary on Aug. 14.  Milwaukee County Executive Chris Abele hosted the forum in Milwaukee's Pritzlaff building, with a focus on how state aid is currently distributed to municipalities. Abele has been critical of the amount of taxpayer dollars that go to the state versus the amount that flows back.

The candidates were asked how they would help local governments address the rising costs of state-mandated services, as that form of state aid has remained flat.

Vinehout said she would increase shared revenue by 30 percent, which she said translates to $415 million.

"If that payment seems steep, it's less than the estimated $464 million in the first budget payment to Foxconn," she said, referring to Walker's efforts to help with the construction of Taiwanese manufacturer Foxconn's new plant in Racine County. 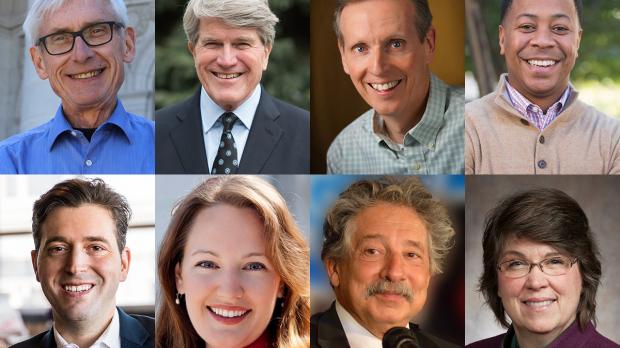 Soglin said he would change how state aid is determined by taking into consideration a measurement of poverty, like the number of homes in a municipality that are below the federal poverty level.

Roys also called for a funding model where local governments get a "fair share" of what they're paying in.

The candidates said they favored raising the gas tax to help improve roads across the state.

Roys said her long-term infrastructure plan which would re-index the gas tax according to inflation and would allow for regional transit authorities.

"And makes these high-capacity commercial vehicles that are really doing a number on our roads pay their fair share for the use of our roads,” she said.

Evers said he is open to any solutions to address the state's transportation troubles.

"I believe Foxconn should be funding mass transit to get workers to their alleged plant," he added.

The candidates all criticized the use of state tax incentives for companies like Foxconn and pitched how they would bring about economic development.

"And I want to have folks that normally wouldn't have the capital or the ability to start a business to have that ability," he said, adding that he would also advocate for raising the minimum wage.

McCabe said the state can help ignite the economy by building communications infrastructure for high-speed Internet.

The latest Marquette University Law School poll found 38 percent of Wisconsin voters were still undecided over who they were going to vote for in the Democratic primary, but Evers held the lead.​​

"This field of Democrat candidates is showing that they would rather raise your taxes to fix problems their party helped create instead of working toward real solutions for Wisconsin," said Zimmerman in the statement. "When Democrats controlled state government, they raided the transportation fund and increased taxes on families by billions of dollars. Scott Walker, meanwhile, has invested over $20 billion into our transportation system statewide — including the largest increases for local governments in the last 20 years — and secured the transportation fund from future raids by reckless and desperate politicians."

Editor's Note: This story was updated to include the Republican Party spokesman's statement.