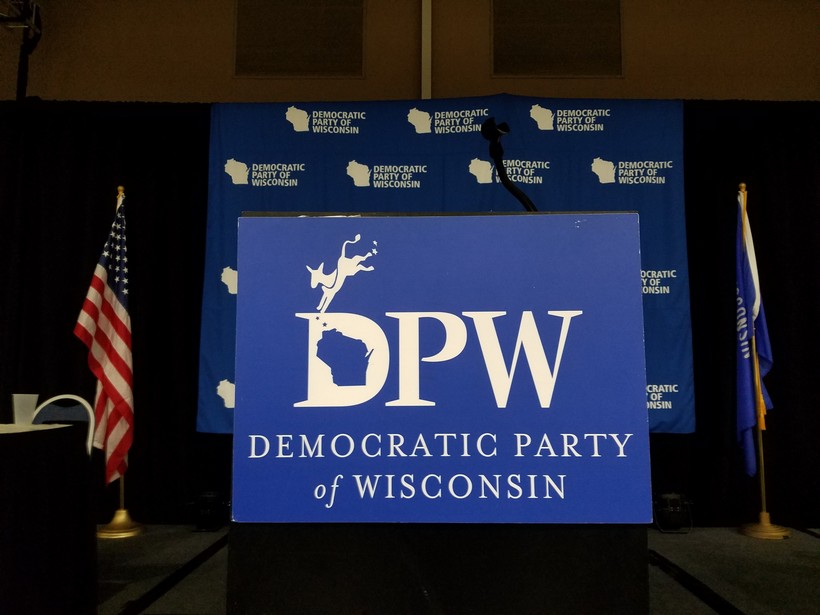 10 Democrats Spoke At The State Democratic Convention In Oshkosh
By Shawn Johnson
Share:

All 10 Democratic candidates for governor addressed the state Democratic Convention in Oshkosh on Friday. And they kept it short.

The state Democratic Party gave them each five minutes to make their pitches to party activists. They varied between critiques of Gov. Scott Walker and visions of what Democrats could do if they take back the state government for the first time in almost a decade. The order of the candidates was chosen at random.

Kelda Roys, the former state representative from Madison, began by talking about her 3-year-old daughter having to participate in an active shooter drill.

"That is not the world I want her to grow up in, and I am ready to do something about it," she said.

Roys also promised 12 weeks of universal paid leave for every parent in Wisconsin.

"It's time to unleash the real power of our economy by allowing student loan debt to be refinanced," Roys said. Keeping with the theme of minimizing student debt, she also promised free tuition at two-year University of Wisconsin System Colleges.

Tony Evers, the state Superintendent of Public Instruction who has been criticized by some Democrats for being too mild-mannered, walked out on stage to the Alice Cooper rock anthem "School's Out." He also used profanity to make his point: "I'm running for governor because I'm goddamn sick and tired of Scott Walker gutting our schools."

Evers alluded to his own personal battle with cancer, saying "I beat cancer and I can beat Scott Walker."

As he has elsewhere, Evers told the crowd that his statewide name recognition made him best equipped to beat Walker.

Mahlon Mitchell, the head of the state firefighters union who lost a race for lieutenant governor in 2012, opened up his speech with a joke about his son.

"He's the president of his eight grade class, so he told me that if I want to learn how to win an election, he's the only Mitchell who actually has done that."

Mitchell also recounted the story of a young firefighter who was severely injured in a snowmobile accident with just a year on the job.

Andy Gronik, who ran a consulting business in Milwaukee for decades, sought to paint himself as the outsider candidate in the race.

"Scott Walker has beaten the establishment politician three times in a row," Gronik said. "It's time to do something different."

Gronik also described himself as a fighter.

"I can't wait to go toe-to-toe with Scott Walker and have him give me some of that open-for-business nonsense. Because for 35 years, I not only built my own business to one of the largest of its type in the world, I helped other businesses to be successful."

Josh Pade said he turned in more than enough signatures to get on the ballot, making him the latest Democratic candidate to enter the already-crowded field. Pade, an attorney, worked as a legislative aide for Democrats in Washington, D.C. and on Democratic campaigns.

"I want to bring a new perspective and a new face to Democratic politics and progressive economics," Pade said. "I believe that pro-growth and progressive are not opposing values."

Kathleen Vinehout, a state senator from Alma, said budgets were about priorities, and Walker had prioritized corporations over people. She said she tried to change that in the Legislature, especially in 2011 when Democrats left the state Senate to prevent a vote on Walker's collective bargaining bill.

"That's why I, and we ... left the state in 2011. So we could put people first. So people could see, understand and speak out when Walker made his first move to put people last and a few well-connected corporations first," Vinehout said.

Paul Soglin, the mayor of Madison, said workers had been attacked for the past eight years in Wisconsin.

"Scott Walker started with Act 10, and he's finishing with Foxconn." Adding that Walker's deal with Foxcocnn had exploited Wisconsin's natural resources and local governments to help a foreign corporation.

"After eight Walker years, it is time to reward your hard work," Soglin said. "We must protect our labor from Walker exploitation. No excuses, no exceptions, no exploitation."

Soglin also said he would prioritize affordable housing as governor.

"We have to deal with the reality that there is a cancer growing in the body of our democracy that must be cut out," McCabe said. "We have allowed cronyism and corruption and what amounts to legal bribery to take root in our state, and it must be uprooted."

Matt Flynn, the former state Democratic Party chair and attorney, said he'd use his skills as a litigator to lead the case against Walker.

Flynn received a handful of boos as he spoke. He's come under criticism from groups that represent victims of sexual assault for his work representing the Milwaukee Archdiocese in several priest sexual abuse cases.

"When it comes to gun violence, we're going to do a hell of a lot more than offer up thoughts and prayers."

Wachs' speech varied between what Wisconsin had become under Walker and what it could be under Democratic leadership, promising everything from better roads to less student debt to high-speed Internet.

"We're going to go back to a Wisconsin we know," Wachs said. "A Wisconsin that cares."