Three people stand on a busy street corner in Madison holding homemade posters. They wave and smile at the occasional car that honks as it drives by.

The honks are undoubtedly inspired by the text on the trio’s signs: "People Powers Billboards!," "Commoners Sense," and "McCabe for Gov. 2018."

The poster holders are three of about 10 Mike McCabe supporters who have posted up along Midvale Boulevard in Madison, hoping to lure the politically agnostic into an event where McCabe is speaking. 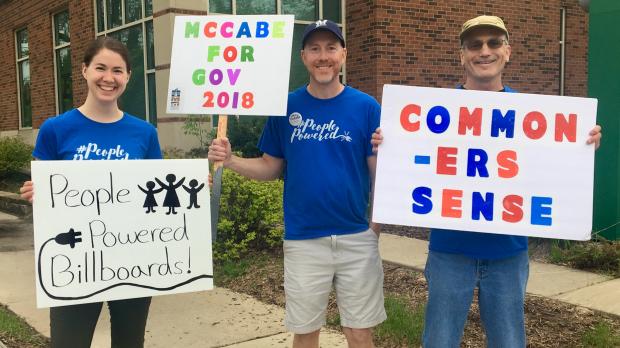 McCabe, 58, is one of several Democrats jostling for the chance to face Gov. Scott Walker in this fall’s general election. But first, he has to win August’s partisan primary.

Sarah Wilson, 26, one of the McCabe supporters, said this is the first time she’s ever volunteered for a political campaign. She doesn’t have anything to compare it to, but she said she feels heard and valued — like her ideas and work for the McCabe campaign really matters.

"Because we’re not taking big money donations, it really has to be a group of volunteers going out, talking to people, instead of just sending out mailers or putting on ads," she said. "It has to be person-to-person."

Wilson said supporters are making McCabe posters and standing on street corners and sidewalks all across Wisconsin, even when McCabe isn’t in town for an event. The whole point is to get his name out there.

Alice Schneiderman, another volunteer, said she feels like she really knows McCabe. She’s never felt that way about a politician before.

Schneiderman said she has gone door-to-door in her neighborhood to invite people to attend a McCabe meet-and-greet at her house. She jokes that she brings up McCabe at places like the gym to anyone who will listen. One of her workout class companions now volunteers for the campaign, too.

"I feel like I can go up and hug Mike. And his wife, Marilyn!" Alice Schneiderman said. "I mean — when does that happen?"

This type of enthusiasm isn’t uncommon for McCabe supporters, who liken him to political figures like Bernie Sanders and Bob La Follette.

Schneiderman said she was drawn into the McCabe campaign after hearing him talk about campaign finance and his commitment to eschew any big money donations.

McCabe said that’s a big part of his campaign philosophy. He won’t take any single campaign donation over $200 — no money from big donors or PACs.

"All the work I’ve done over the course of virtually my entire adult life has shown me that there are strings attached to those checks," he said.

McCabe helped launch the Wisconsin Democracy Campaign, a group that tracks money in politics, in the mid '90s. For years, he was the go-to guy in the state for information about financial misdeeds by politicians of either party. Now he says it’s time to practice what he preached.

"This is an opportunity to replace all that money power with people power," McCabe said.

A Man Of The People

Being a "man of the people" is a big part of McCabe’s campaign and political identity. His campaign committee is called "Commoners for McCabe." He has written a book and advised other candidates under the umbrella of a group, "Blue Jean Nation."

Performer Peter Leidy recorded a theme song for the group, a take on an old Neil Diamond song, with the refrain, "And since the powers that be just won’t see, we’d much rather be a nation in blue jeans."

"This is an opportunity to replace all that money power with people power," Mike McCabe said.

Empowering regular people to engage with politics isn’t an uncommon political strategy, but some argue there are elements of McCabe’s campaign that are particularly reminiscent of a major figure in Wisconsin political lore: former U.S. senator, congressman and governor La Follette.

Nancy Unger, professor of history at Santa Clara University, has written books about Bob and Belle La Follette. She believes the lines drawn between McCabe and La Follette are reasonable.

"I think Mike McCabe is really echoing (La Follette’s) notion that if you don’t like the system, then you have to change it," she said. "You can’t just wait for political leaders to change it, you have to work with them to do that."

For all the passion McCabe has inspired with his campaign, he’s also drawn substantial ire from some on the left.

McCabe has worked for Republicans in the past and won’t promise he’ll endorse the eventual Democratic nominee for governor if it’s not him.

"I think it undermines the credibility of the person who’s asking people for votes as a Democrat who says they’re not willing to support the Democratic nominee," said Scot Ross, executive director of One Wisconsin Now, a liberal advocacy group.

McCabe said he doesn’t agree with the idea that any member of the Democratic Party is better than Walker. For Ross, that’s a big problem.

"I don’t care who gets out of the primary — they are all in a different solar system in terms of how lousy Scott Walker is and what a disaster it would be for him to be governor four more years," he said.

When asked about this particular dustup, McCabe stands his ground. He said it’s disrespectful to voters to imply candidates are interchangeable, as long as they have a "D" behind their name.

"I really want this campaign to give voters the opportunity to feel really good about casting a ballot for a change, because heaven knows people feel doomed in election after election to choose the lesser of evils," he said.

Armed with "people powered billboards" and $200 donations, McCabe aims to ride that wave of hope and optimism all the way to a general election victory in November.