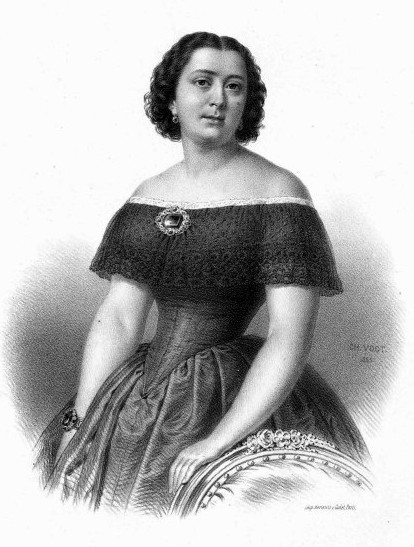 In 1853 the famed contralto Marietta Alboni was about to give a farewell concert and the manager of New York's Broadway Theater was desperate to have her perform on his stage. He approached conductor Luigi Arditi and asked him to convince the star to sing the part of Norma at his theater. As a reward the manager promised to buy Arditi the most handsome baton in New York.

Arditi wanted the handsome baton, but even more he wanted to hear Alboni sing Norma – a performance that would be an artistic triumph. As Arditi said later, "I knew the extraordinary extent of her command over her vocal powers. Her figure was not nearly so unwieldy as it afterwards became and, well, to make a long story short, I went to see her and pointed out the success she would no doubt obtain."

They tried the music together and Alboni allowed herself to be persuaded to perform the part of Norma at the Broadway Theater.

The theater manager kept his word and presented Arditi with a baton that was a work of art in its own right. The baton and the music collided at one point though. The ornate baton had a topaz set at the bottom of it and at the other end it sported a little golden Apollo playing on a harp.

"I was very proud of this baton," Arditi recalled. "And must have struck up the opening bars of the overture with unusual energy because Apollo shook loose, flew off, and smacked a flute-player on his bald head."

The orchestra member kept on playing, but all during the first act, Arditi's attention was divided between the score of Norma and the growing lump on the fluteist’s head. The next night, when Arditi took his place before the orchestra, the musicians were relieved to see him take out a perfectly simple, unornamented baton.  Luigi Arditi had been right all along—the real reward for his efforts was the music