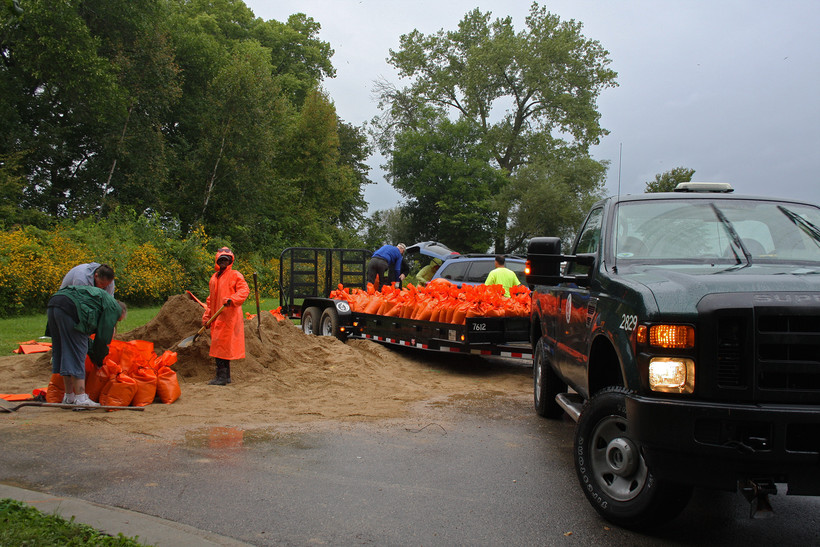 On Friday, Aug. 24, 2018, Madison residents and city officials fill sandbags in preparation for more flooding as rain is predicted in the forecast. Jenny Peek/WPR

After record-breaking rainfall in parts of Dane County earlier this week caused damaging floods, area residents and local officials are preparing for more rain Friday and into the weekend.

Madison Mayor Paul Soglin told reporters at a 1 p.m. Friday press conference that 1,700 homes in low-lying areas on Madison's Isthmus were in danger of being flooded. City officials are pasting bright orange warning leaflets on each of the homes telling them how to protect their property — and to be ready to evacuate in case the flooding gets worse.

"One scenario we are preparing for is heavy, extensive rain, say, five inches or more rain," Soglin said. "That would require evacuation."

While Soglin said that situation is unlikely, the city is preparing for the worst. As of 1 p.m. Soglin said 40,000 sandbags had been filled. The Wisconsin National Guard is onsite filling sandbags in Madison.

The National Weather Service has issued a flood warning for central Dane County until 4:30 p.m. Friday.

Before more rain arrived Friday, Dane County officials opened up the gates Thursday to the Tenney Locks on Madison's near east side and city traffic engineers are planning roadway detours through Madison's Isthmus, where water levels are rising.

Dane County Executive Joe Parisi said on WPR's "The Morning Show" on Friday that drivers can still get across the Isthmus despite the floodwaters, but might need to take alternate routes. Parisi said road closures will be changing throughout the day Friday.

"East Johnson Street is closed. Certain lanes on East Washington are closed. That could change throughout the day depending on the water levels and on how much rain we get," Parisi said. "We're forecast to get, I believe, about a quarter inch today. Then, fairly quiet until Sunday."

The city closed main thoroughfares because of flooding and is preparing to close additional roads. City and county officials are continuing to monitor the Yahara Lakes' water levels.

The city of Madison has released a map that identifies areas on the city's east side that are at a high risk of flooding as more rain moves through.

The map shows highlighted areas, particularly on the city's east side. City officials have warned people living or working in these areas that their property is in danger of flooding.

"Currently, all of our lakes are at or above their 100-year high levels," Parisi said. "We are seeing rising waters on the Yahara River and on lakes Monona, Waubesa and Kegonsa." 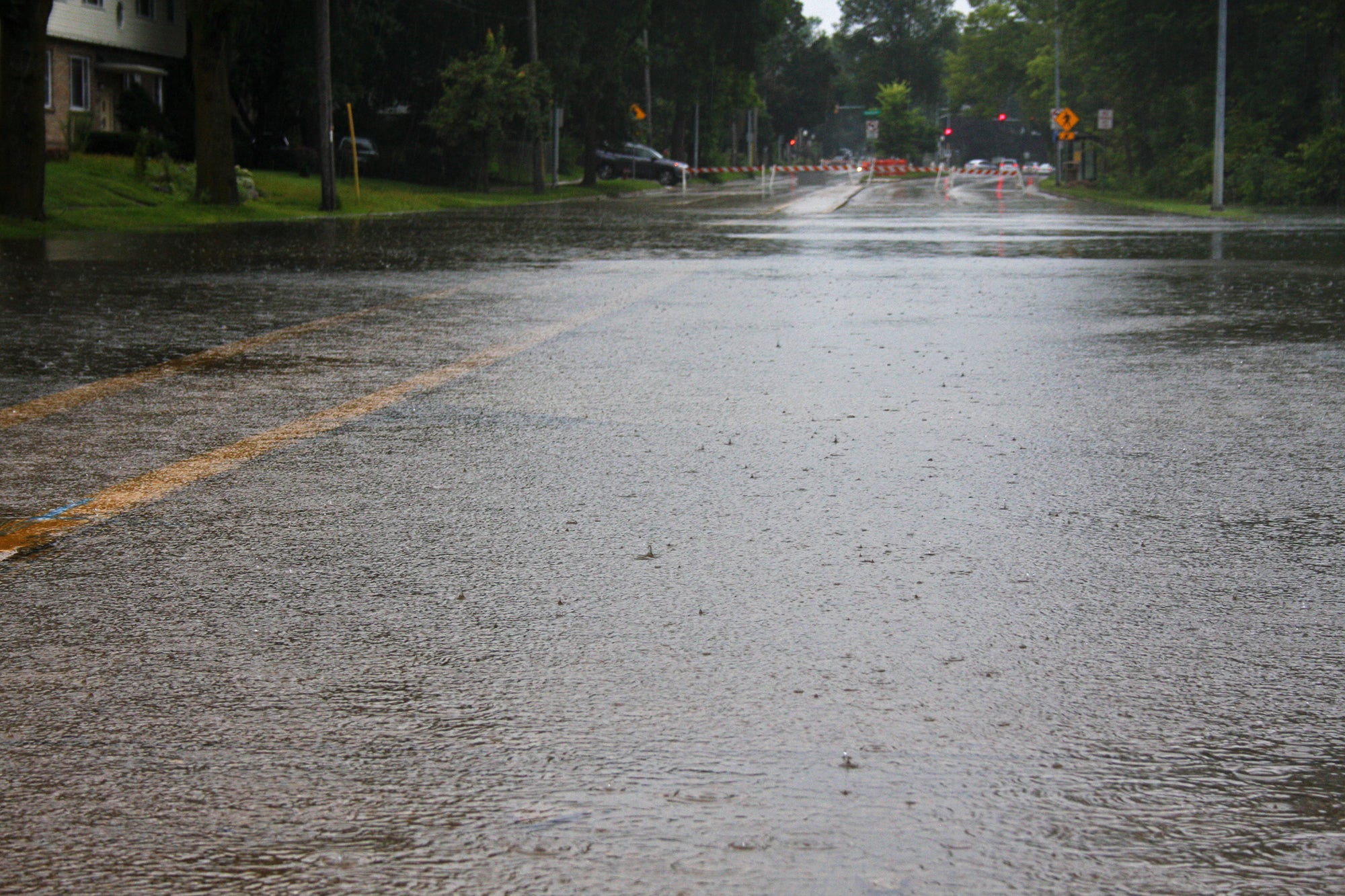 On Friday, Aug. 24, 2018, floodwater spills out of the Tenney Park Lagoon and onto East Johnson Street after heavy rainfall Monday, Aug. 20, 2018.Jenny Peek/WPR

Parisi said residents downstream are sandbagging and preparing for increases in water levels.

Stormwater drains in Madison's Isthmus empty into the Yahara River and into the chain of lakes. Parisi said water is coming back up through the storm sewers causing flooding in the Isthmus. In these cases, sandbagging isn’t as effective in preventing flood damage as when water is overflowing from the lakes.

At the Friday press conference, Mayor Soglin pointed to climate change in regards to the lakes being at 100-year high levels.

"When you start having 100-year storms every couple of years we’re obviously encountering climate change," Soglin said adding, "Dane County’s going to have look longterm on a regular basis, look at what level we maintain Lake Mendota and Monona so if we get additional rain will we have capacity to accept it."

"Road closures are not the only thing the city will be facing. Homeowners and businesses will also be facing possible flooding. Unlike Monday evening, we have a warning with this (storm)," Crawley said. "We strongly recommend if there are furniture and valuables on lower levels in homes or businesses on the Isthmus, move them to a higher level of the building."

The city is providing sand and sandbags, closing a city well on the near-east side to prevent possible water contamination and preparing detours through the Isthmus. Barricades are also being built. As of 3 p.m. Friday, 966 individual reports of private property damage had been reported to the United Way, according to a Dane County press release.

More than 11 inches of rain fell Monday into Tuesday, and one man died after being swept away by floodwater. 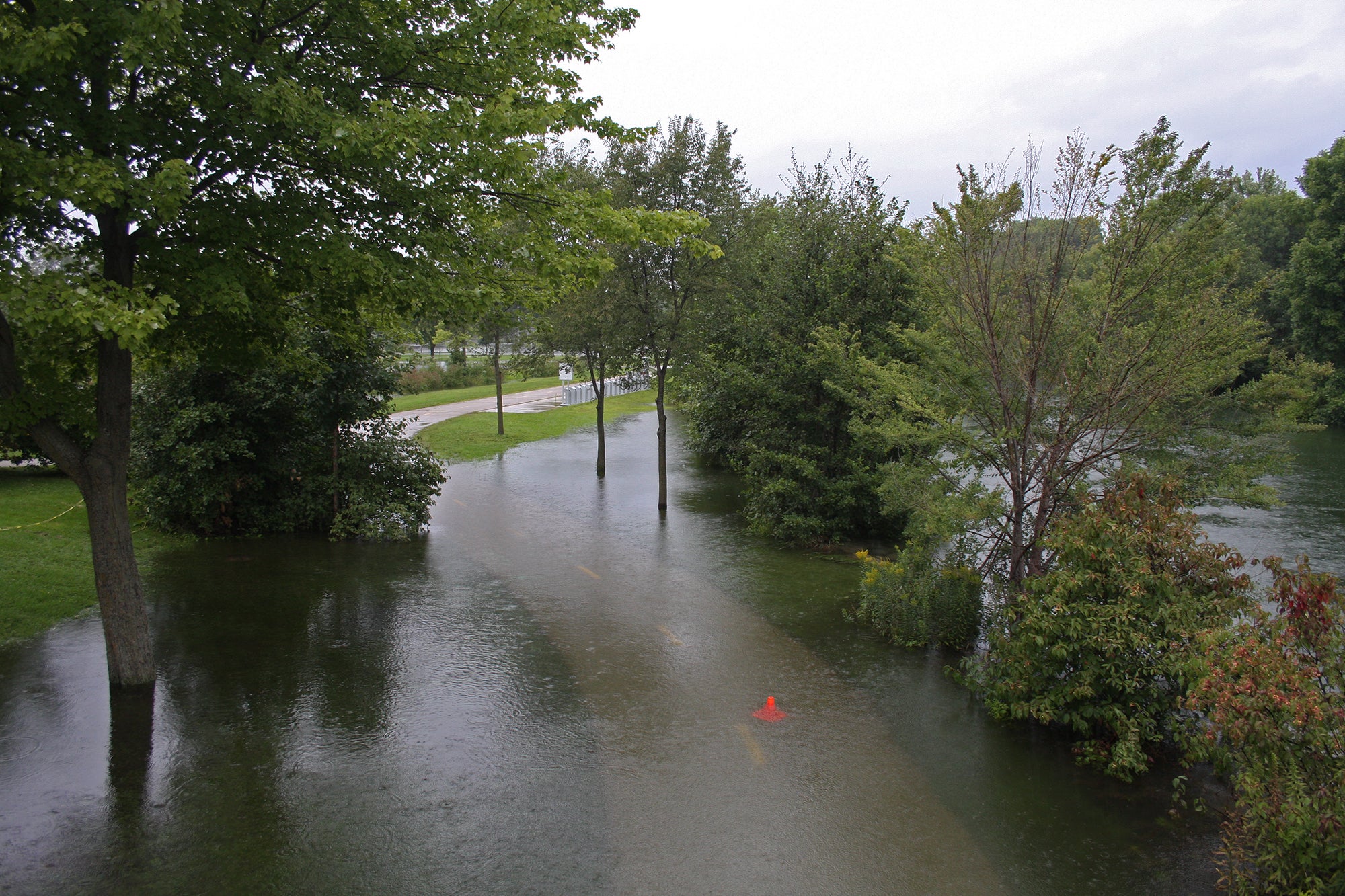 While cleanup has continued since earlier this week, contending with the surge of rainwater and the accompanying flooding, particularly near the chain of Yahara Lakes, has become a cause of concern. Major roadways have been closed and some residents are taking steps to protect their homes because of the rising water levels.

Downstream of Lake Mendota, the levels are expected to continue to go up. Officials predicted Wednesday afternoon that the levels could rise as much as 6 inches along Lake Monona, Lake Waubesa and Lake Kegonsa. A slow-no-wake order remains in effect for Lakes Mendota, Monona and Waubesa.

Earlier this week, Dane County Emergency Management officials began urging communities along the lakes to be prepared for flooding.

City officials warn that the elevated lake levels might cause the flooding that could continue "for one to two weeks."

Earlier this week, Madison city officials said stormwater engineers were working with county and the state Department of Natural Resources to monitor the levels and prepare for what could be to come.

City officials are urging motorists not to drive through standing water; to park on high ground; and avoid driving to work during peak commuting hours if possible.

Parking requirements for street sweeping have been suspended, and people with street parking permits will see increased flexibility until further notice. Parking tickets will not be issued and city parking ramps will be offering free parking from 9 p.m. until 7 a.m. through Aug. 31. Madison Metro Transit will also be offering free bus service for all city routes throughout the weekend to minimize auto use.

Gov. Scott Walker has already declared a state of emergency in the county. 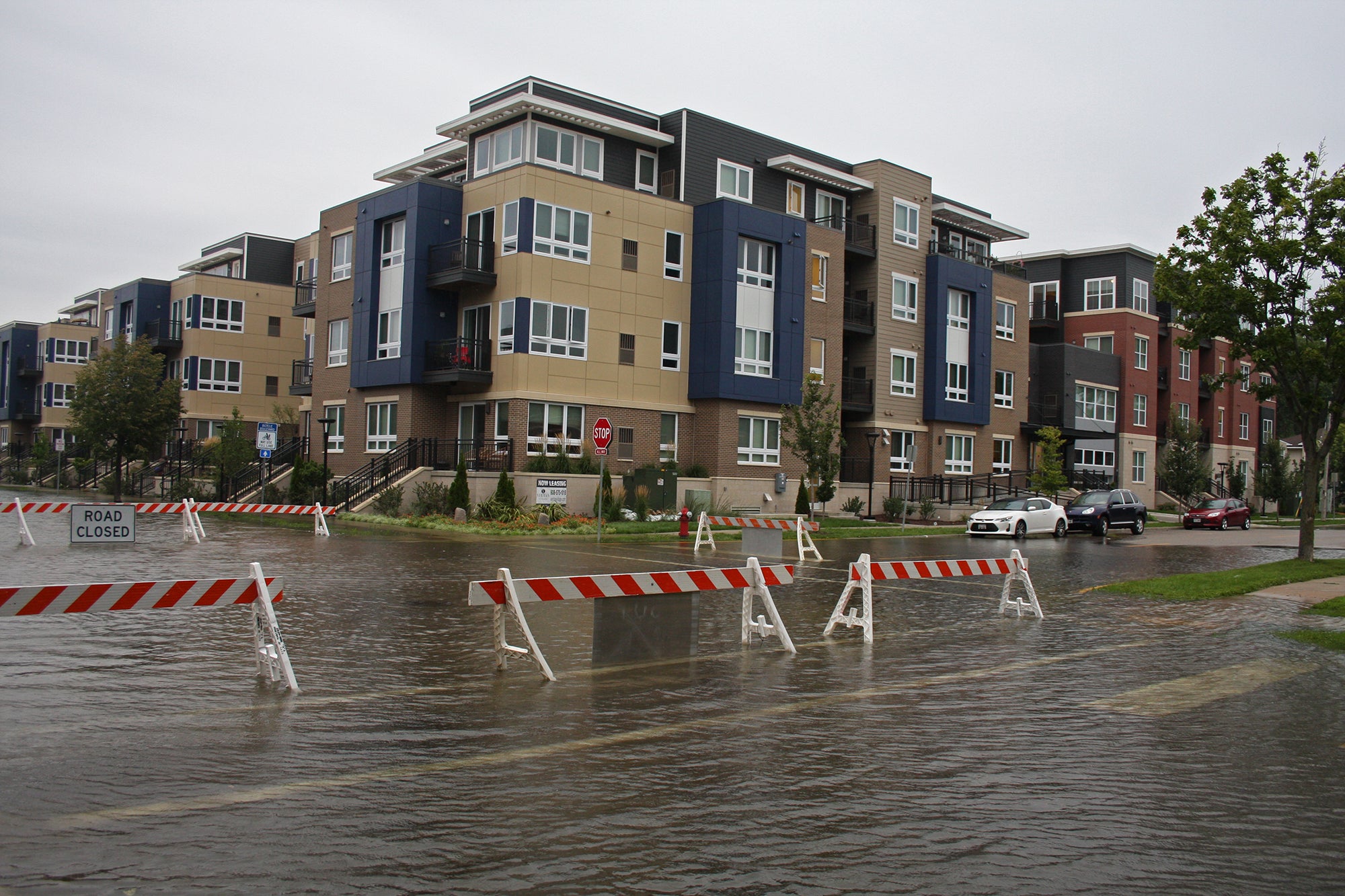 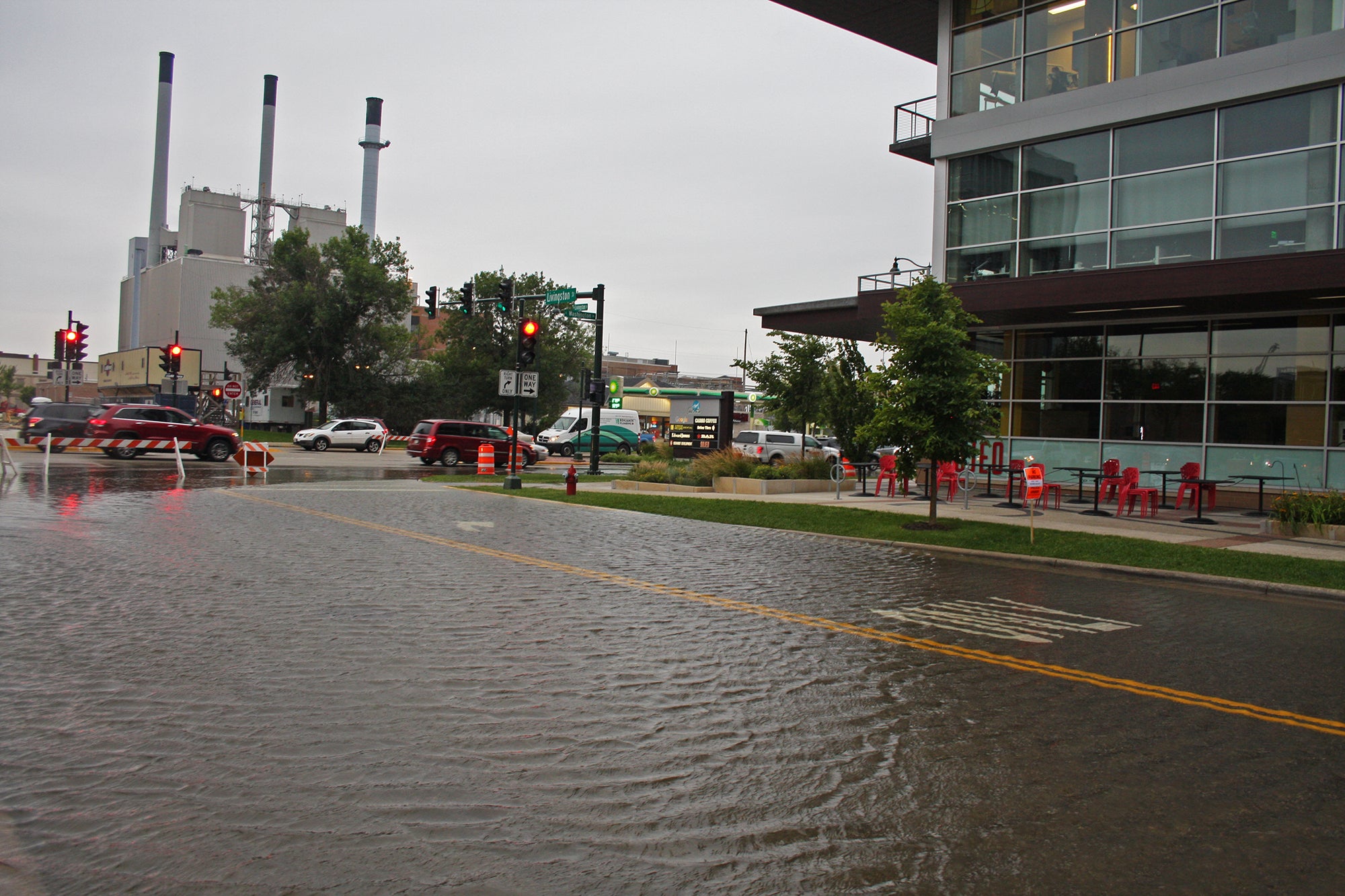