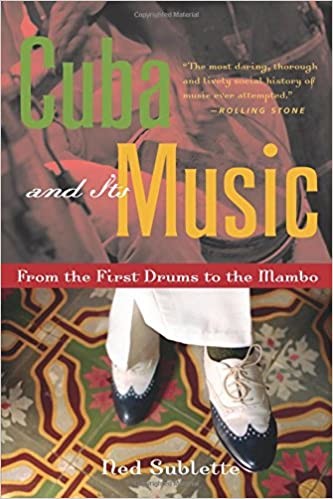 Cuba and Its Music

Ned Sublette's book is by no means, a 'quick' read.  It is not written from a scholars point of view.  However, it is indeed scholarly, and experientially - voiced through the lens of a practitioner.  Before traveling to Cuba, read this book.

"This entertaining history of Cuba and its music begins with the collision of Spain and Africa and continues through the era of Miguelito Valdés, Arsenio Rodríguez, Benny Moré, and Pérez Prado. It offers a behind-the-scenes examination of music from a Cuban point of view, unearthing surprising, provocative connections and making the case that Cuba was fundamental to the evolution of music in the New World. The ways in which the music of black slaves transformed 16th-century Europe, how the claves appeared, and how Cuban music influenced ragtime, jazz, and rhythm and blues are revealed. Music lovers will follow this journey from Andalucía, the Congo, the Calabar, Dahomey, and Yorubaland via Cuba to Mexico, Puerto Rico, Saint-Domingue, New Orleans, New York, and Miami. The music is placed in a historical context that considers the complexities of the slave trade; Cuba's relationship to the United States; its revolutionary political traditions; the music of Santería, Palo, Abakuá, and Vodú."                            -Publisher's Introduction