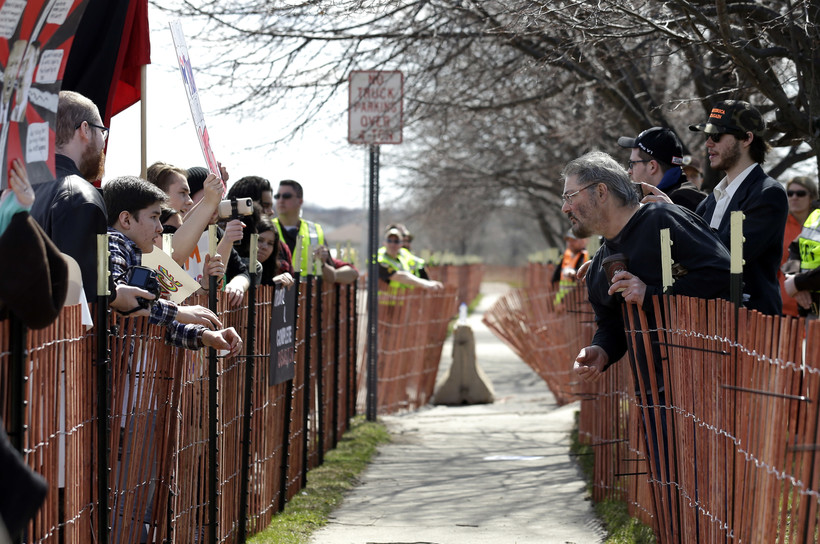 Protesters argue with Trump supporters outside his event in Janesville.

There was a circus-like atmosphere in Janesville on Tuesday afternoon as crowds gathered to support and protest Republican presidential candidate Donald Trump during his first in-person campaign appearance in Wisconsin.

The crowds that gathered outside the Janesville Conference Center, backing up traffic for several hours, seem to have largely been peaceful. There was, however, one notable exception that was caught on camera: Video and photos of the incident show a young anti-Trump protester apparently trying to punch another person before getting pepper-sprayed in response.

It's not yet clear who the person wielding the pepper spray was. A Wisconsin State Journal reporter tweeted shortly after the incident that police have said the girl who was sprayed received medical attention.


Here's a video (and prev photo) taken by @derek94gt of the punch/pepper spray incident at the Janesville Trump rally pic.twitter.com/iVCHvsISDi

No photo of the punch, but here's a photo of the pepper spray. Woman received medical treatment, police said. pic.twitter.com/1EOyBbAWQz

Meanwhile, a line of Rock County snowplows parked to form a barricade along the back side of the building while police redirected traffic and monitored the vocal crowds in the front. The street leading up to the conference center is lined with tables and carts selling Trump merchandise, some of it vulgar.

Many Trump supporters said they’re backing him in this race because he talks like them and because he wants to build a wall between the U.S. and Mexico. Some blasted the Republican Party, saying they’d always voted GOP but no longer trusted the party establishment to protect workers.

As Trump supporters filed into the building, a crowd of protesters marched up and down the street, sometimes getting into shouting matches with Trump supporters. They blasted Trump for a comments that he’s made this campaign that they say are racist and promote hatred.

Also, this story has been updated to reflect that the individual who was pepper-sprayed was a teenage girl.