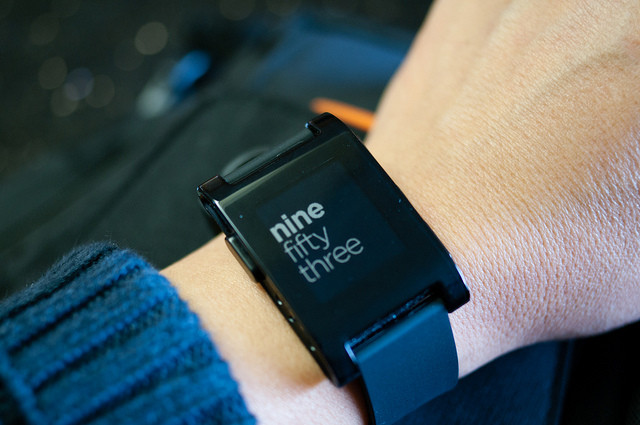 The pebble watch, which connects to a smartphone by Bluetooth, was initially launched through a crowdfunding effort. Photo: pchow98 (BY-NC-ND)

In many ways, computers and the Internet have leveled the playing field over the years: Anyone who wants to write can start a blog without having to get a publisher. People who want to sell goods or crafts can do so on a variety of sites quickly and easily.

Recently, another digital tool has gained traction among creators, innovators and others looking to finance a cause or project: online crowdfunding.

Crowdfunding is at its most basic level, asking for support from many people for an endeavor, whether it be a creative effort, or the development of a new device or other object. Because it is Internet-based, funding can come from anywhere in the world.

The concept is related to crowdsourcing, according to Paul Hedges, the emerging technologies archivist in the Wisconsin Historical Society's Library & Archives Division. Crowdsourcing is a way to bring together collective knowledge, such as in the case of thousands of people contributing information to Wikipedia. Crowdfunding similarly creates “opportunities to get likeminded people together who are interested in a particular topic … and to help fund it, or to help accomplish whatever that goal is,” he said.

Hedges explained that there are four basic models for crowdfunding. First, and probably best-known, is crowdfunding that offers rewards to the people providing financing — for example, a filmmaker crowdfunding a movie might offer donors incentives such as free DVD copies, or behind-the-scenes tours. Kickstarter and Indiegogo are good examples of websites that offer a platform for such reward-based crowdfunding. Many of the projects on these sites are related to the arts, media and technology.

Another model is crowdfunding through which the donor receives equity in the company that is requesting the financing. Hedges said that there are currently efforts to more closely regulate these transactions, since it is essentially a stock offering using new technology. While Fundable does offer the equity model in recruiting financing for start-up businesses, they also use a reward-based structure similar to Kickstarter’s as well.

A third type of crowdfunding is, according to Hedged, “basically just giving.” Unlike with Kickstarter, there are no rewards given to donors. While many types of requests fit under this heading, Hedges said that the most common theme is, “somebody’s in trouble.” In other words, funding may go toward efforts to help pay for unexpected medical bills, to assist someone in fulfilling a lifelong dream, or perhaps replacing belongings lost in a tragedy. Giving to nonprofit charities through aggregator giving sites is also included in this type of crowdfunding. One example of this type of site is Go Fund Me.

The fourth type is the least-public type of effort, Hedges said: “an on-line tool that allows people to put their money together for a specific project just for them.” For example, if a family is planning a reunion with a high price tag, crowdfunding is an easy way to let people know the cost and provides a central place for the money to be collected. Tilt is an example of this type of personal crowdfunding.

Hedges said that innovative projects seem to fare the best in crowdfunding. He pointed to 3D printers as a product that was promoted early in its existence through crowdfunding. As the technology has become more accessible, he said you can trace its progress through successive crowdfunding appeals.

Crowdfunding doesn’t just provide financing, according to Hedges. It also provides market research by showing what is of interest to people, and how different approaches succeed or fail. Anecdotally, he said that a video that really introduces potential funders to the project, to the people making it happen, and to the vision of the creator seems to increase support significantly.

In fact, some of the most satisfying projects that Hedges himself has funded are those that included a dialogue with the people seeking support. “Part of it is really feeling like you’re part of a community. And with crowdfunding, what you get is a two-way conversation between me, the funder, and the creator,” he said.

That interaction also provides valuable input and feedback to make the project better.

“I’ve even seen times were they’ve modified projects, not just based on my specific suggestions, but on the suggestions of ‘the crowd,” Hedges said.

For those considering launching a crowdfunding effort, Hedges offered this advice. Put together a business plan that will appeal to investors. You can’t just count on people you know and who will give you the benefit of the doubt. Likewise, make sure that whatever rewards are offered will be delivered, and in as timely a manner as possible. Hedges said that he pledged to a children’s book project with the idea of giving the copies that he would receive as rewards to his nieces. Three years later, the books are still in process, and his nieces have outgrown them.

Hedges also advised people looking for funding to be realistic about the amount of money needed, and what can be raised. Because there is a time limit and a minimum goal set, it is critical to plan well. On sites like Kickstarter, if the minimum is not raised in the allotted time, donor pledges are cancelled, and the project receives nothing.

Hedges also cautioned that during that campaign period, often a month, it is important to communicate with current and potential donors, and to use all methods of communication possible to get the word out. A strong social media network can make or break a project’s success.

A well-known recent example of a successful crowdfunding project is LeVar Burton’s effort to bring "Reading Rainbow" into schools nationwide. The initial goal of $1 million was met in 11 hours, and after 35 days, more than $5.4 million was raised. ​