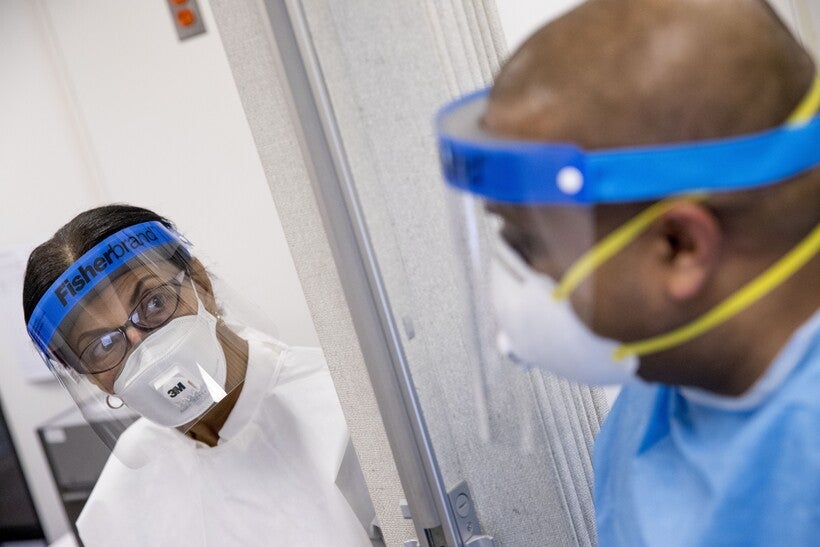 Dr. Justin Jacob, right, and Medical Technologist Sosina Merid, left, with the D.C. Department of Forensic Sciences speak inside in a mobile testing lab unit that will begin accepting testing in response to the coronavirus outbreak, Tuesday, April 28, 2020, in Washington. A team of technicians can test up to 50 samples within four hours and provide same day results. Andrew Harnik/AP Photo

Health care providers in Wisconsin say COVID-19 testing supply chains are improving and the state's testing capacity is growing. But significant challenges still stand in the way of a plan to test 12,000 state residents per day as state leaders look to begin reopening Wisconsin's economy.

There were 3,098 COVID-19 test results reported by the state Department of Health Services on Thursday. Of those, 334 were positive. Though the daily rate has fluctuated, testing has nearly doubled since April 17.

As part of his "Badger Bounce Back" plan to begin easing social distancing restrictions and opening more businesses, Gov. Tony Evers' administration has set a goal of testing 12,000 people per day for COVID-19.

As of Wednesday, DHS listed the testing capacity in Wisconsin at 11,047 per day.

Testing capacity means the maximum number of tests laboratories around the state think they can process in a week before running out of supplies, said Dr. Alana Sterkel, assistant director of the Communicable Disease Division at the Wisconsin State Lab of Hygiene.

Sterkel said supply chains are still stretched, but they're improving. And she called the collaborations between public and private partners to grow testing capacity in Wisconsin a heroic effort.

"Hospital laboratories across the state have all been joining in to enhance the total testing capacity in the state since early March when the public health labs went live," said Sterkel. "We now have a huge expansion in our testing capacity. Now 50 different labs are testing for COVID-19 with another 37 labs expecting to go live soon."

Sterkel said testing capacity is not equally available across the state because some labs are not able to get the supplies needed to collect samples or process them. Sterkel said they recognized early on that nasal pharyngeal swabs and the collection kits that keep samples from patients viable could be a major challenge blocking an increase in testing.

"One thing that we did, we here at the state lab, we partnered with some local producers pretty early on to start sourcing these nasal pharyngeal swabs," Sterkel said. "We've been able to transfer some of these operations over to the State Emergency Operations Center, and they have recently set up a collection kit distribution center."

The Federal Emergency Management Agency has supplied Wisconsin with 55 million items to address the COVID-19 pandemic, including 10,000 testing swabs and 10,000 testing mediums. Still, lawmakers including Democratic U.S. Rep. Mark Pocan have said supplies from the federal government have fallen short.

Nate Ledeboer is the director of microbiology and molecular diagnostics at Froedtert & The Medical College of Wisconsin. He said when they began testing for COVID-19 his lab was able to process around 100 samples per day. Since then, he said they've increased capacity to 1,000 tests per day, though they’re currently only processing about half that.

"We saw an initial significant spike in demand for testing," said Ledeboer. "Then we saw a bit of a drop off. And that's probably an indication that the social distancing that's going on is working. And as we're starting to think about how do we safely go back to work, how do we safely reopen our economy ... we are, again, starting to see a bit of an increase in testing."

Ledeboer said one of the biggest challenges for providers looking to ramp up testing is a global shortage of the nasal pharyngeal swabs, which reach deep into the nasal cavity. He said a single manufacturer located in the Lombardy region of Italy makes around 80 percent of all the nasal swabs in the world.

"So they were early on very constrained in terms of what they could get out of Italy, what they could get into the United States," said Ledeboer. "And, you know, they've been running at 110 percent throughout the outbreak, just trying to address everybody's needs. But the insatiable demand right now for swabs continues to really overwhelm them."

Jeff Pothoff, chief quality officer for UW-Health in Madison, said their testing capacity changes weekly based on the availability of collection kits and other supplies. But generally he said they're able to process around 500 tests per day. He said the lack of nasal pharyngeal swabs has forced some providers to use swabs that don't reach as far into the nose, where virus concentrations are less dense. As a result, Pothoff said there may be more chances for tests results to show a false negative.

Pothoff said he expects health care providers and the state hygiene lab will soon have enough testing supplies to meet the 12,000 test per day goal set by Evers and DHS. But he said administering that many tests may be more challenging in rural areas of the state with fewer hospitals nearby.

"So I think, you know, now that people feel like the supply is there, the conversation probably flips too, 'Well, how do we, how do we now use it?'" said Pothoff.

DHS Deputy Secretary Julie Willems Van Dijk said the state is working on plans to provide potential community testing centers to help alleviate demand among hospitals. She said they're also working with local health departments to ramp up contract tracing, which alerts people who may be symptom free that they've been in contact with someone who tested positive for COVID-19.

"We're looking at surging up a thousand (contact tracers) at the state level, and that will supplement what is also happening at the local level, too," said Van Dijk. "We have brought on an additional 287 state employees and trained them in contact tracing. We're bringing on another 50 this week and another hundred next week."

She said DHS is also looking into using text messages to alert people that they've been exposed to the virus because some may not feel comfortable answering a call from an unfamiliar phone number.