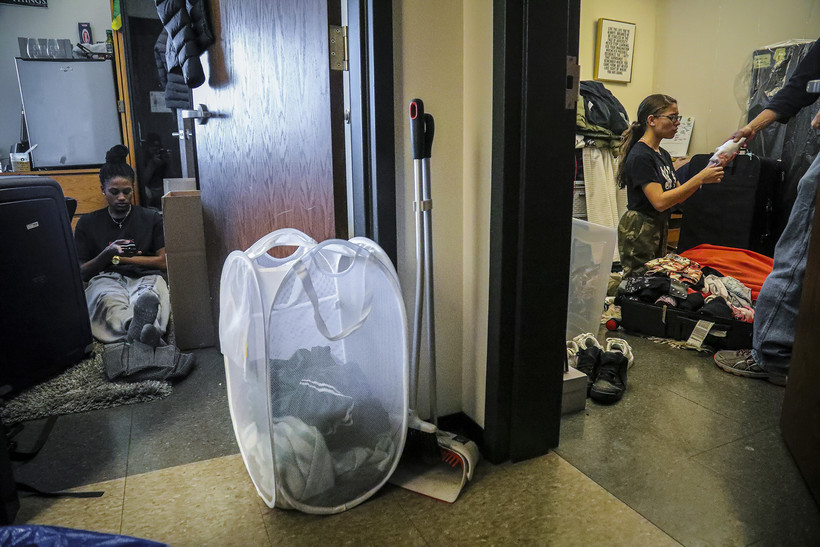 COVID-19 Positives On The Rise At Some Wisconsin Universities

Some Wisconsin universities are seeing steep increases in the numbers of students and employees testing positive for COVID-19. The spikes come just after most colleges started their fall semester classes.

On Saturday, the University of Wisconsin-Madison reported 92 students and one employee tested positive for COVID-19, which works out to a 6.1 percent positive rate. That's the highest rate since UW-Madison began collecting testing data for its test data dashboard.

The seven-day average for the positive rate at UW-Madison was 3.4 percent. That's more than twice the 14-day positive rate of 1.6 percent reported Thursday by Public Health Madison Dane County.

PHMDC also reported that more than a quarter of all recent Dane County cases of COVID-19 came from either students or staff at the university.

All told, 601 UW-Madison students and employees have tested positive for the virus since late July.

On Friday, campus administrators told hundreds of members at nine UW-Madison fraternities and sororities to quarantine themselves for two weeks after 38 students belonging to the Greek life chapters tested positive for COVID-19. The announcement came two days after the start of fall classes at most UW System campuses.

The University of Wisconsin-Whitewater reported that the number of students testing positive over the last week more than tripled compared to the week before.

Between Aug. 30 and Sept. 5, there were 22 reports of students testing positive for COVID-19. The previous week saw six cases reported.

A total of 23 cases of COVID-19 have been reported between Aug. 21 and Sept. 3 at Marquette University, the state's largest private college.

Marquette has established a set of gating criteria, which administrators say will be included along with "other internal and external factors" to make decisions regarding the fall semester. Those include test result timing, number of cases, available space for quarantine or isolation and the supply of personal protective equipment on campus. On Saturday, the criteria for PPE was listed as yellow, which means the university has between two weeks and 45 days worth of supplies.>

The University of Wisconsin-Milwaukee reported 13 cases of COVID-19 as of Saturday at its main campus and branch campuses in Waukesha and Washington County.

The week before, the university had reported three cases. UW-Milwaukee's COVID-19 dashboard doesn't include the number of total positive tests.

In an email to WPR, a UW-Milwaukee spokeswoman said a total of 225 tests were administered by the campus health center between Aug. 3 and Sept. 3 with 13 coming back positive for a "case positivity rate" of 6 percent. The spokeswoman cautioned that the majority of tests have been given to students showing symptoms associated with COVID-19.

UW-Milwaukee, like all UW System campuses, plans to begin mandatory COVID-19 testing for all students living in on-campus, university housing twice a month. The plan is to use antigen tests, which detect proteins in the virus that causes COVID-19 within 15 minutes. As of Friday, the spokeswoman said antigen testing was still being scaled up and the campus wouldn't begin the dormitory testing program until Sept. 14.

There were seven cases of COVID-19 reported at UW-Stevens Point the week of Aug. 30 through Sept. 5. Since April, the university said there have been 18 positive results. The university data doesn't include the total number of tests administered or a percent positive rate.

According to UW-Parkside's COVID-19 dashboard, just one employee has tested positive for COVID-19 since August but the data doesn't specify what day the positive case was reported. The webpage states there were no new cases during the last two weeks.

State owned universities other than UW-Madison, UW-Milwaukee, UW-Whitewater, UW-Parkside, UW-Stevens Point and UW-Green Bay have not set up ways to publicly report positive cases of COVID-19. A spokesman with the University of Wisconsin System told WPR the central office was designing a dashboard with testing data from all the state's universities and branch campuses that will go live Sept. 8.