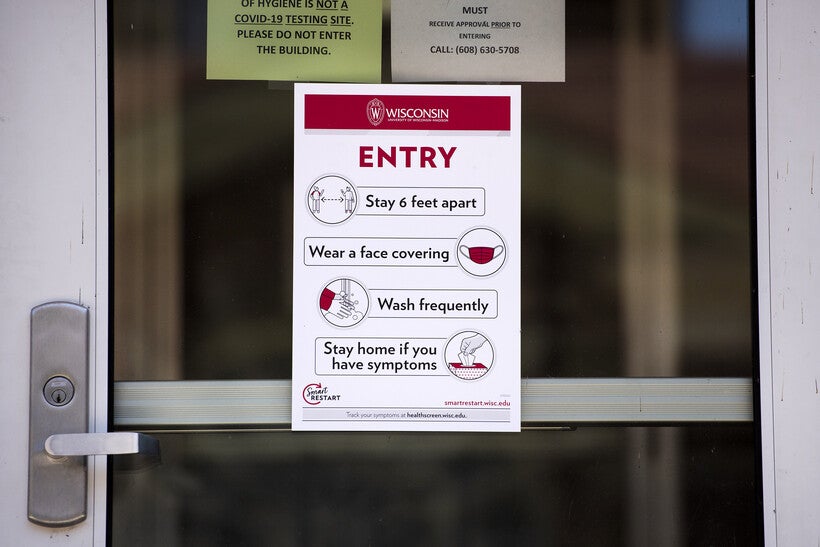 State universities planning to start spring classes on time and in person later this month
By Rich Kremer
Share:

The three largest University of Wisconsin System campuses are reporting spikes in positive cases of COVID-19 weeks before the start of spring semester classes. While some of the state's smaller, private colleges push start dates back, UW campuses say they're starting on time and in-person.

During the first week of January, more students and employees at UW-Madison tested positive for COVID-19 than at any point since August 2021, according to the university's COVID-19 dashboard.

Still, the number of students being tested is lower than it was during the fall 2021 semester, with an average of 519 tests per day between Jan. 3 and Jan. 7, according to the dashboard.

UW-Madison is no longer conducting regular surveillance testing of students, but a campus spokesperson said weekly testing for unvaccinated students will resume at the start of the semester on Jan. 25 and students will be notified about upcoming testing guidance later this week.

COVID-19 testing has continued to be required for unvaccinated UW-Madison employees over winter break. Positivity rates during the first week of January hovered between 10.3 and 13.6 percent.

A UW-Madison letter sent to students and employees on Jan. 7 said the university's mask mandate will continue through March 1 and at-home COVID-19 antigen tests will be available during the upcoming semester.

"Given the speed at which the omicron variant is spreading, antigen testing will allow students and employees who test positive to more quickly isolate themselves and reduce their chance of infecting others," said the letter.

UW-Madison did not respond to requests for comments on the surge in positive COVID-19 cases on campus.

Reez Bailey is the chair of shared governance with the Associated Students of Madison. He said that overall, students don't seem eager to see classes move online like they did in 2020, but ASM is concerned "about this mentality that we have to be in-person no matter what."

"I've actually been in talks with the vice provost of teaching and learning since the beginning of last semester about exploring high-flex learning, which is a learning model that utilizes both in-person and virtual teaching elements," said Bailey.

Bailey said a specific concern ASM has heard about is a lack of testing locations on campus between semesters.

"As of right now, there's only one testing location on campus at the University Club," said Bailey. "And in order to come back to in-person education safely, leadership within ASM definitely agrees that there needs to be more testing sites available for students."

For UW-Milwaukee, the start of 2022 has brought the highest number of student COVID-19 infections on record for the campus. Between Jan. 3 and Jan. 9, 278 students tested positive. Of the 1,274 rapid antigen tests administered during that timeframe, 17 percent came back positive. There were 155 diagnostic, PCR COVID-19 tests administered that week, 47 percent of which were positive.

As of Jan. 6, Milwaukee County's seven-day positivity rate was 35.7 percent.

A spokesperson for UW-Milwaukee said in an email to WPR that required testing will not resume until students move back into residence halls on Jan. 22 and Jan. 23. They would not comment further on the increase in COVID-19 cases on campus.

At UW-Oshkosh, the student positivity rate has also increased, though overall testing numbers remain low. Between Jan. 3 and Jan. 7, the campus' seven-day positivity rate hovered between 14.2 percent and 19.2 percent. As of Tuesday, it was 18.8 percent.

UW-Oshkosh Chief of Staff for University Affairs Kimberly Langolf said the campus is concerned about rising COVID-19 case levels on and off campus, but the University is "in a good spot to manage our case loads on campus because most of our students have gone home for the month of January."

"As far as UW Oshkosh is concerned, we're in a position where we're kind of on a holding pattern to wait and see how things develop with the omicron variant for the upcoming semester," said Langolf. "But as of right now, we have no plans to change from our face-to-face modality starting at the end of this month."

Langolf said Oshkosh, like UW-Milwaukee and UW-Madison, is not conducting regular COVID-19 screenings for students that are on campus in between semesters.

"The speed at which omicron transmits almost makes surveillance testing unreasonable," said Langolf. "We're not going to catch those cases ahead of time because of how quickly it spreads."

Instead, she said symptomatic students are the ones being tested.

"So, we're really focusing on identifying those folks who are sick, infected, getting them isolated, quarantined," she said.

Some private universities in Wisconsin are taking a different approach to the state's surge in new COVID-19 cases and hospitalizations. Edgewood College, Lawrence University and Marquette University announced earlier this month that they would push back the start of spring semester classes by a week. Other campuses like Beloit College, Ripon College and St. Norbert College will require students and employees to show proof of a negative COVID-19 test before returning to campus.

UW-Madison, UW-Milwaukee and UW-Oshkosh, at this point, are not requiring negative COVID-19 tests before the start of the spring semester.