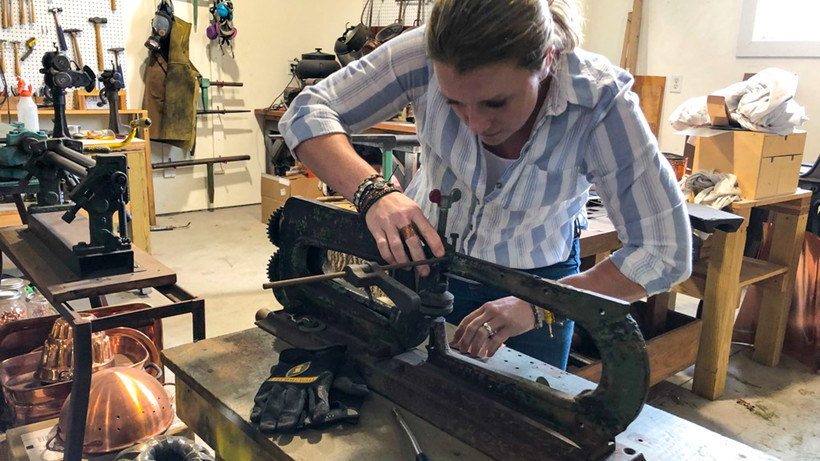 Sara Dahmen works in her shop to shape a copper mug. Steve Paulson/TTBOOK

Could you build your own pots and pans? Coppersmith Sara Dahmen revives a lost art

An author reflects on learning a trade: 'It’s buried in your sinews and your bones, part of your hand knowledge.'
By Anne Strainchamps
Share:

Copper-smithing is not for the faint of heart. "It’s grueling work," says Sara Dahmen, as she holds a giant scissor blade over a thick sheet of metal.

"This will cut your fingers off," she warns. She’s building a copper mug — the kind Paul Revere might have sipped ale from in his local tavern, back in 1776. On the shelves of her workshop in Port Washington, Wisconsin, genuine pieces of antique copper cookware — fish poachers, butter warmers, tea kettles, sauté pans and stock pots — wait to be restored and re-lined with tin.

Dahmen is one of the few women working as coppersmiths in the country, building traditional cookware by hand. It’s a lost art, and in the age of mass-produced Teflon and stainless steel, might seem obscure. But pick up one of Dahmen’s saucepans, admire the warm rose-tinted metal and the moonlight gleam of the tin lining, and you’ll be as lost as I was when I visited her workshop for a recent episode of "To The Best Of Our Knowledge."

Copper isn’t just beautiful, Dahmen told me. It’s one of the oldest metals and historically beloved by cooks for its remarkable conductivity. Set a copper pan on a stove and it’ll heat incredibly rapidly and evenly; pull it off, and it’ll cool down just as fast. It also makes environmental sense.

Dahmen told me she’s surprised we don’t talk more about where our cookware comes from.

The following transcript has been edited for brevity and clarity.

Anne Strainchamps: We’re all paying more attention to where our food comes from, how our vegetables were grown or meat was raised. You think we should be asking the same questions about the pots and pans we cook with?

Sara Dahmen: That was the crux of the very first conversations I had when I started building an American cookware line. Everywhere I turned, the reaction, even from the foundry owners and the metal spinners, was supportive but skeptical: "Why would you invest in this? You're going to be competing in price range against items made in China!" And I'm like, "Well, because someday it'll matter. Someday people are going to care, or they won't have access to something made in China."

We have spent so much time talking about the food itself but not about where the chemical change happens, what it's made out of, who made it and where the materials come from. And so I wanted to be very transparent and to be able to say, "Well, the mines are in this country, and the mint is in Canada, and it gets shipped to Iowa, and they make it there."

AS: Sounds like you think there’s a politics to cookware.

SD: I think it should be part of the conversation. Food is such a huge part of our lives on every level. Whether you're trying to be healthier or to cook amazing dishes or try something new, food touches everything and cookware is hand-in-hand with it. And yet it’s the forgotten half-sister of our food conversations.

AS: So why copper?

SD: Aside from its beauty, what I love about tin-lined copper is that it'll never go in a landfill. It's infinitely repairable, whereas all the other cookware out there will eventually fail and wind up in a landfill. I love the renewability of using the plain, simple, basic metals. 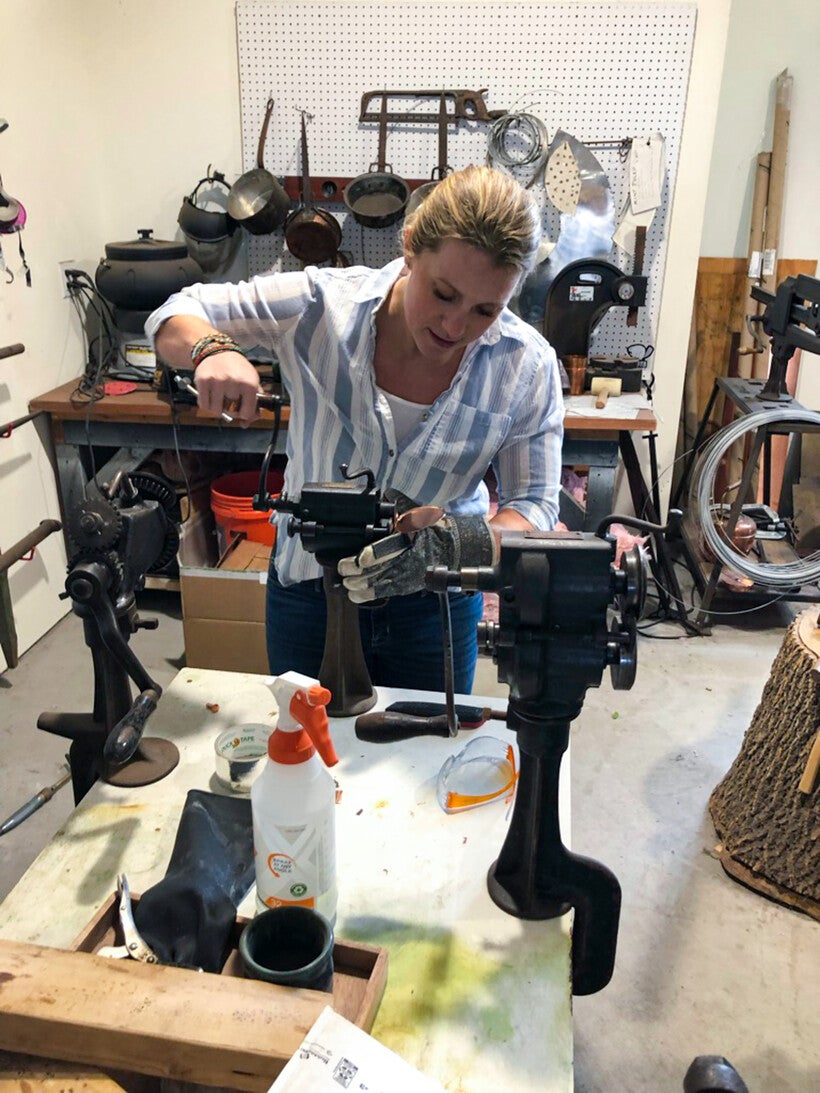 AS: Your path to becoming a coppersmith was through writing historical fiction. How did you go from writing novels to working with copper and tin?

SD: It was not planned! I like to research excessively before I start writing my novels, because then I feel like I don't have to cross-check my facts. It almost feels like if I close my eyes and think too hard, I could fall sideways into the past. It's a physical feeling, like vertigo. That happened when I was doing the research that led to "Tinsmith 1865."

It’s like I’m in the characters’ kitchens and I know where everything is — this is the cookware they used, this is how it got fixed, this is who would fix it. And I realized no one's really doing that anymore. And I thought we should do that again.

At first it was phone call after phone call: "Can you spin copper?" "No, no, we don't even know where to send you." And then I discover Bob (Bartelme) is 15 minutes from my house, and he happens to be a retired master coppersmith. He took me under his wing and I think it's been seven years now that I've been working under him. So over time, without really meaning to at all, I became a full-time coppersmith.

AS: Doesn't it take a lot of physical strength to be a coppersmith?

SD: Yes it does. When you’re tinning over a fire, you need to be able to hold a pot that’s between a pound and 20 pounds over your head, stable, while it’s got molten metal in it. Your hands and upper body have to be really strong to handle it.

I've actually had people who want to work with me and after a day I have to say, "You're not strong enough. Go lift weights." It’s heavy, dangerous work. Almost every time I’m in the shop, I get hurt. 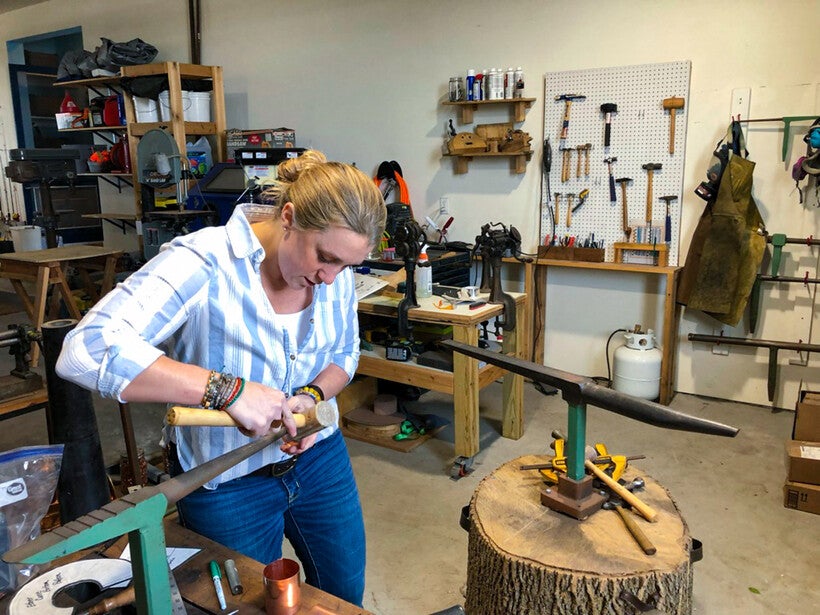 SD: You wreck your hand, or you put your hand in the pot and get a giant burn because it's 600 degrees, and you forgot to wear a glove. Or your neck gets burned from the fire, or you burn your hair off.

AS: Have you done all those things?

AS: What keeps you coming back?

SD: I like the physicality of it. I like the idea of being strong, the feminist vibe of that. I want my kids to grow up thinking healthy is strong, healthy is powerful — not, healthy is skinny. And I like knowing that I’m keeping something alive that would otherwise be dead.

I'm the youngest person doing this. It’s mostly older people and that's great because they're super passionate and so willing to share what they know. But I’m just one brain.

AS: Some people learn this kind of stuff as a hobby, for fun. What's the difference between a hobby and a trade?

SD: A trade is something that you learn, and then whether or not you use it as a business or a hobby is totally up to you. So even though you might be only a weekend blacksmith, the fact that you know how means you have a trade. No one can take it away from you. It’s buried in your sinews and your bones, part of your hand knowledge. 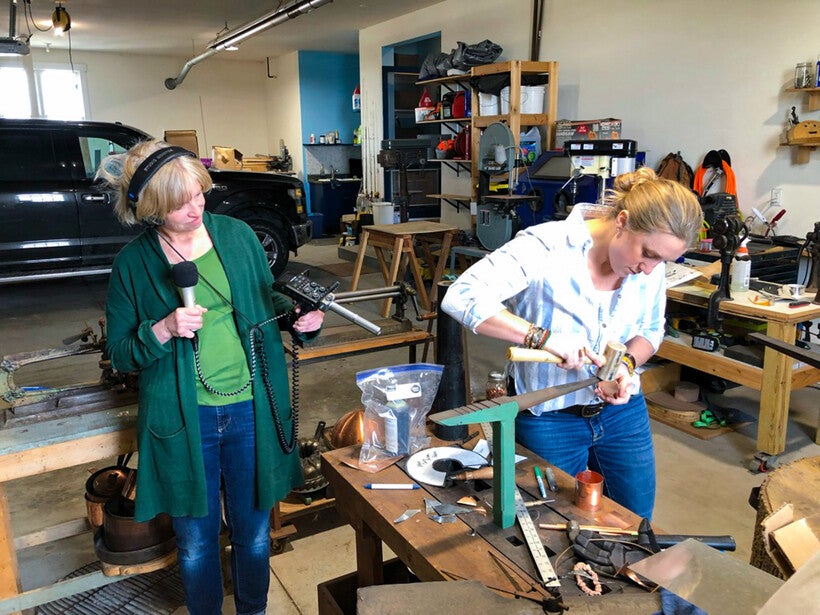 AS: I love that phrase, "hand knowledge." What is it?

SD: It sounds so cliché to say this, but you kind of become one with the material you're working with — it becomes an extension of yourself. Learning something that's an old trade or a lost art or even just, "I'm a gardener and I spend time with my hands in the dirt."

Well, making something grow and learning the rhythms of the weather and the land — there's power in that, and it translates into self-confidence.

That's what’s so exciting about seeing more and more people pick up these old trades. Hopefully, it'll translate into happier people and then the world will be a happier place.