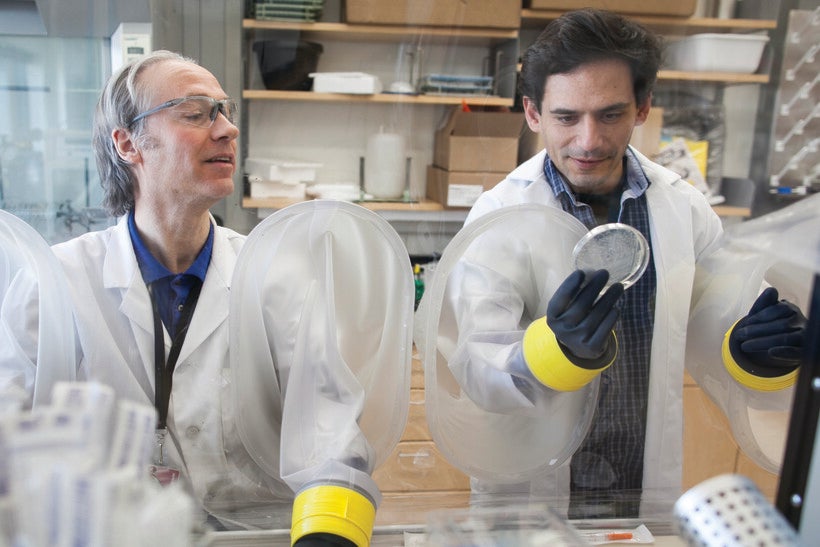 Could Microbes Be The Key To Renewable Energy?

Ethanol has long been used along with gasoline to power automobiles, but its limitations are far-reaching — the renewable fuel won't work in diesel trucks or naval ships or in airplanes.

At the University of Wisconsin-Madison, which houses the Great Lakes Bioenergy Research Center and the Wisconsin Energy Institute, researchers are now investigating ways of producing fuel that can work in all types of engines, and they're using microbes to do it, said Tim Donohue, WEI interim director.

Microbes, or microscopic organisms, include viruses, fungi and bacteria, such as the E. coli strain that recently sickened people who ate romaine lettuce. But Donohue's team only uses microbes that don't get people, plants or animals sick. In fact, the microbes probably wouldn't live outside of an industrial environment, he said.

In addition to research on new types of fuel, the research center, which is part of four bioenergy research centers in the United States and Canada, is also using microbes to develop chemicals that are currently produced from petroleum. There's more potential there for profit, Donohue said, evidenced by the way the fossil fuel industry operates.

Now, about three-fourths a barrel of fossil fuels is converted to fuel and about 20 percent is converted into petrochemicals. But the refinery makes half of its profits on fuel and half on chemicals, meaning those chemicals are a higher cost per unit that the fuel. "We want to enable an industry that makes a combination of fuels and chemicals through the use of microbes," he said. "In that way, the new bio-industry would make valuable products out of a ton of biomass."

Daniel Noguera, a professor of civil and environmental engineering at UW-Madison, said the research is focused on creating a "next generation of energy from microbes."

Part of the team's job is figuring out what the rules are about how microbes behave and use that information to figure out how to get the most out of their production. The goal is to create products from organic residue, or waste, that has a lot of value.

"Wouldn't that be great if the Midwest could then be a producer of fuels and chemicals from locally-produced materials that depend on locally-provided residue?" Donohue asked.

Microbes are varied and it's estimated there are a trillion different species. Most of them haven't yet been discovered.

One of common microbe is yeast, which belongs in the fungi kingdom and is capable of producing ethanol, a type of fuel that when blended with gasoline helps it burn cleaner. Yeast is mixed with sugar from corn starch, which when fermented produces ethanol. Nowadays, the average consumer's car is powered by about 10 percent ethanol.

Microbes also create methane, a primary component of natural gas, through a process called anaerobic digestion. Microbes, which get into organic waste from crop residue, cow manure or just from being in the soil, start to eat the residue and give off heat as methane is created.

"If they can take that renewable residue and turn it into energy, they can use that to offset their cost and use it to run their business at a lower cost to the farmer or city," Donohue said. "They can generate some of their own energy."

While methane still has a role to play in climate change because it's a greenhouse gas, it's still less harmful than coal.

Finding or building a microbe that can produce all-purpose fuel and renewable chemicals is a test of trial and error.

But now that scientists have the capability to map the genome, or sequence the genes of microbes, they can pick and choose qualities of the microbes that are doing the work.

"We go inside of them and we change some functions, change protein or activate some gene, and we get the products that we want that way," Noguera said.

It doesn't always go as planned, Noguera said. Scientists still don't know a lot of the functions of certain strands of DNA. But that's part of the discovery process. This beaker contains switchgrass that has been prepared for fermentation to biofuels and bio-products. Photo courtesy of the Great Lakes Bioenergy Research Center.

After the microbe has been built by the researchers, it can take a couple of days to a week to see what types of byproducts they're making and whether they're producing enough to make the process viable.

"These are not compounds that microbes have evolved the ability to make on their own," Donohue said. "The microbial genome database is like a toolkit — let me see if I can use all of these together in a new organism."

"Odds are, Mother Nature has tried this before and failed or saw no advantage to it," he said. "We're going back and resampling that space to see if we can do something that's productive."

The process is long and arduous to take a compound created from microbes and turn that into something that directly impacts how humans live.

Donohue explained that some of the first kinds of these refineries built for ethanol production cost $250 million. And few, if any, companies will make such an investment without certainty that technology exist to make it viable.

They also need assurance that what's produced in those refineries will have a market. And that requires a tedious evaluation process, which poses its own challenges.

"You can't evaluate performance of these fuels until you get someone to test a lot of them," Donohue said, mentioning that such a strategy might require policy incentives to encourage companies to invest.