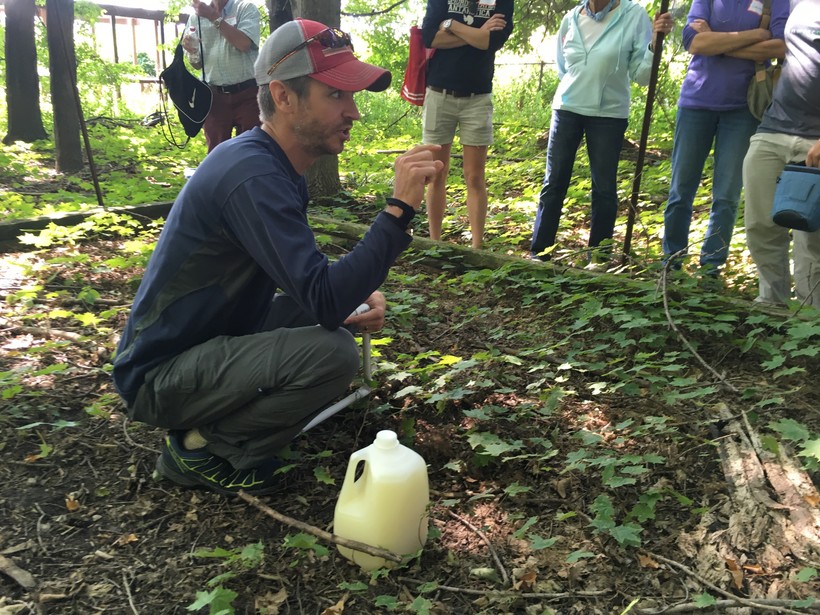 UW-Madison Arboretum ecologist Brad Herrick demonstrates how to survey for invasive jumping worms to a group of volunteers at the Arbortetum in 2017. Photo courtesy of Eric Hamilton

Could Heat Curb The Spread Of Invasive Jumping Worms?

Research from the University of Wisconsin-Madison Arboretum has determined that heat can kill the cocoons of jumping worms, an invasive species that turns over topsoil and disrupts soil ecology.

While the research, published in the American Midland Naturalist journal, focused on the cocoons of jumping worms, it has potential implications for stopping their spread. 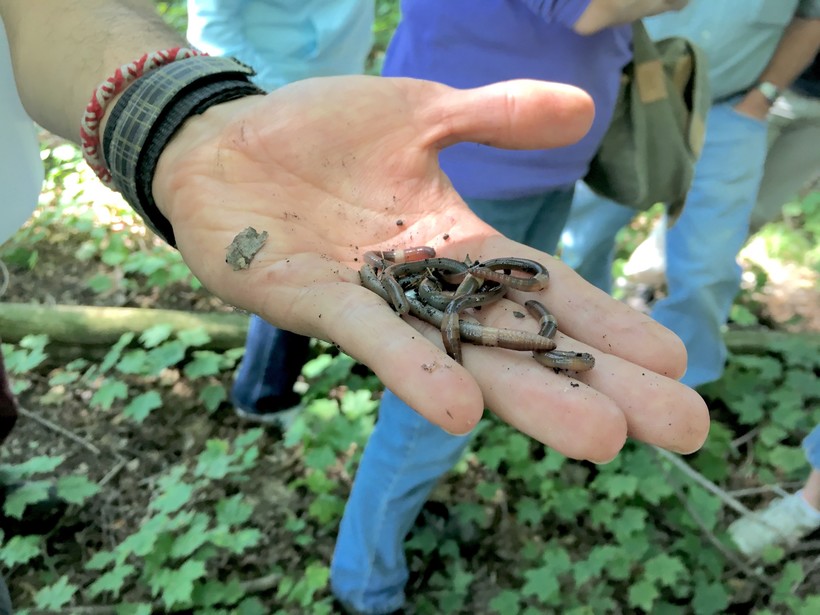 The scientists said that the worms might actually die at temperatures as low as 81 degrees — a hypothesis based on temperature variations in the ovens where the cocoons were kept.

The research is in its beginning stages, with little known yet about how to apply such a heat treatment to larger areas. Herrick said a form of solarization — using a tarp to cover an area to trap heat — could be a potential solution on a smaller scale.

For now, best management practices involving jumping words should still be followed. These include watching your yard or environment for changes to the soil, cleaning your equipment and tools before and after use and avoiding trading plants with others if you can't be sure the soil is free from these worms.

The worms probably won't be eradicated, but Herrick said the goal is keeping them out of high quality forests and backyard gardens. One way to do that is invest in heat-treated compost, he said.

Herrick, who co-led the study with research specialist Marie Johnston, got the idea to test cocoons' exposure to temperature from compost regulations. Commercial compost industries are required to heat their piles to 131 degrees for three or 15 days, depending on the type of pile, to kill harmful bacteria, pathogens and fungi.

"We thought, could this possibly be a way that we could control these earthworms, specifically their cocoon?" he said.

Technically, none of the state's earthworm species are native, but some have proven more helpful than harmful. Some of the more deep-dwelling earthworms form tunnels in the soil that help aerate it and get water to plant roots. Additionally, these worms' excrement has beneficial nutrients for plant growth. But they're not necessary, Herrick said.

"Our native habitat did not evolve in the presence of earthworms, so (the habitat doesn't) need them to be a healthy system," he said.

Jumping worms are an annual species and they overwinter in cocoons that are about 2 millimeters wide.

Jumping worms live under leaves and in the top few centimeters of soil. Their movement loosens topsoil, making it more susceptible to erosion and drying out. Soil ransacked by jumping worms looks similar to coffee grounds.

And even if other earthworms could help mitigate the damage, they're not around. The research is showing that wherever jumping worms are, other earth worms are not.

"They disperse or out-compete every other species of earthworm," Herrick said. 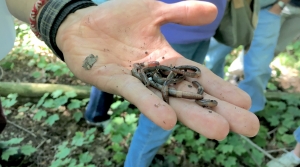