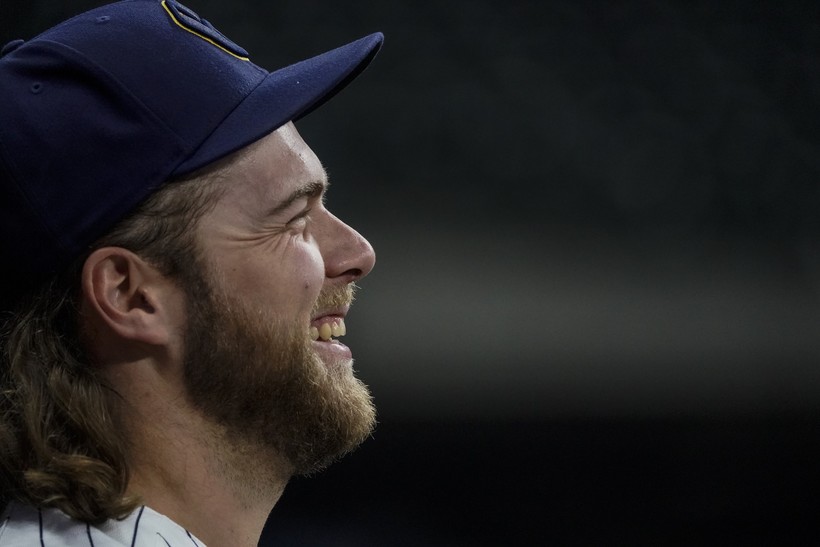 Milwaukee Brewers' Corbin Burnes smiles at a practice for the Game 1 of the NLDS baseball game Tuesday, Oct. 5, 2021, in Milwaukee. The Brewers plays the Atlanta Braves in Game 1 on Friday, Oct. 8, 2021. Morry Gash/AP Photo

For the third time in team history, the Milwaukee Brewers have a Cy Young Award winner.

The award honors the top pitcher in each league. Corbin Burnes was presented with the National League trophy Wednesday night — following a season in which he became the first Brewers starter to finish with the lowest ERA in the league.

Burnes celebrated the honor surrounded by family, and he thanked his coaches and trainers from the Brewers. He didn't have the Cy Young on his radar until he experienced a sophomore season slump, he said.

He added the cutter to his repertoire, and it's since become one of the toughest pitches in the league.

Burnes was named a Cy Young finalist earlier this month. To claim the title, he beat out Max Scherzer from the Los Angeles Dodgers and Zack Wheeler from the Philadelphia Phillies.

Milwaukee’s ace pitched fewer innings than Scherzer and Wheeler as the Brewers used a six-man rotation for much of the season. Still, Burnes set a number of records this year. That includes striking out 58 batters before allowing his first walk of the season.

He also combined with closer Josh Hader to throw the second no-hitter in franchise history.

Brewers pitchers Rollie Fingers and Pete Vuckovich won Cy Young Awards in 1981 and 1982 respectively. Fingers was inducted into the Baseball Hall of Fame in 1992.

Warren Spahn won the Cy Young in 1957 as a member of the Milwaukee Braves. Back then it went to just one player each season instead of one player from each league.

Brewers manager Craig Counsell was a finalist for NL Manager of the Year, which went to Gabe Kapler of the San Francisco Giants. Meanwhile, Hader was named NL Reliever of the Year for the third time. Brewers pitchers have won that award in four consecutive seasons, with Devin Williams taking the title last year.