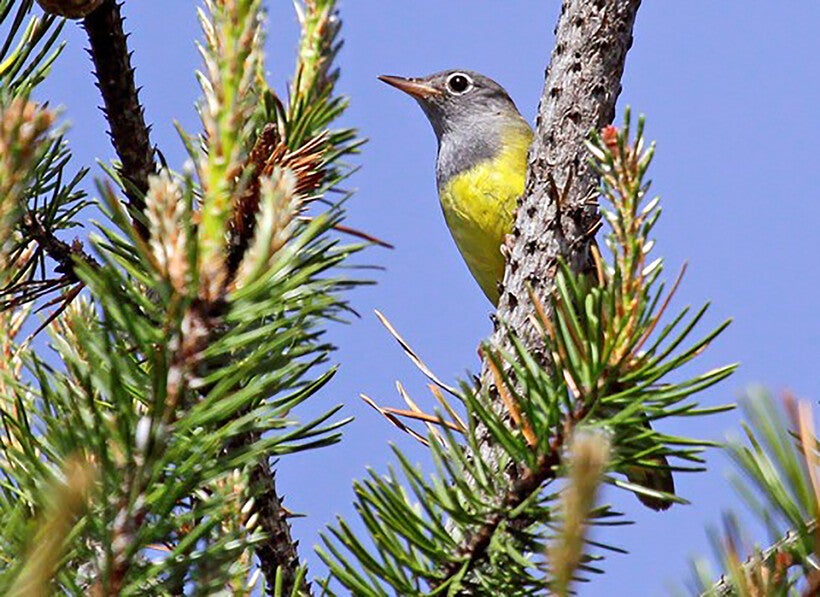 Connecticut warbler populations have dropped dramatically in Wisconsin over the past two decades. Photo courtesy of Ryan Brady with the Wisconsin DNR

Conservation biologists are hoping to stave off further population declines of an at-risk songbird after its range has shrunk more than 80 percent in Wisconsin during the last two decades. Scientists say threats from development, habitat loss and climate change are to blame.

The Connecticut warbler is often difficult to find because it prefers to spend time hidden in the swampy forests and jack pine stands across northern Wisconsin. But when state regulators and volunteers went looking for them, they found no sign of the birds at nearly 60 sites surveyed this past summer.

"It was kind of eye-opening and really demoralizing," said Rich Staffen, a conservation biologist with the Wisconsin Department of Natural Resources.

The agency first discovered the decline as part of the Wisconsin Breeding Bird Atlas II survey conducted from 2015 to 2019. The findings showed the bird's range had declined by 81 percent since the first survey ended in 2000.

The Connecticut warbler, a bird of conservation concern, has seen its population decrease by more than 60 percent since 1966 across its range, according to the North American Breeding Bird Survey. And it’s not the only species in decline. North America has lost 3 billion birds over the last 50 years.

Unlike its name suggests, the Connecticut warbler typically breeds across southern Canada and the northern portions of Wisconsin, Minnesota and Michigan.

"In the last 10 or 15 years, we had seen numbers kind of declining in that north-central part of the state, and really a range contraction, I guess, towards Northwest Wisconsin," said Staffen.

Now, the bird has only been found breeding in the forests of Douglas and Bayfield counties.

Staffen said it's unclear how many Connecticut warblers have historically been found in Wisconsin. There are around 1.5 to 2 million birds worldwide, said Stan Temple, professor emeritus of forest and wildlife ecology at the University of Wisconsin-Madison.

Temple noted Connecticut warblers and other species like spruce grouse and boreal chickadees are occupying the southern edge of their range in northern Wisconsin. Those forest-dwelling species are contending with habitat loss as climate change is causing those forests to shift further north. In the next several decades, the southern limits of the songbirds' range likely will no longer include Wisconsin.

"So in the long term, assuming that climate change continues unabated, the bird is destined to disappear from the Wisconsin landscape, regardless pretty much of what we do," said Temple.

Not only are the birds dealing with habitat loss in Wisconsin, but they're also facing the destruction of their wintering grounds in the western Amazon Basin. Deforestation in the Amazon hit a 15-year high between August 2020 and July of this year.

"Certainly, the condition of the habitat there is deteriorating, both because we're cutting down the forests, but also because climate change is affecting that part of the world as well," said Temple.

DNR officials have worked with the Natural Resources Foundation of Wisconsin to raise money through the Great Wisconsin Birdathon, some of which supports international partners working to protect habitat in South America.

In Wisconsin, the agency hopes to protect and improve habitat for the songbird by working with landowners and foresters in northern Wisconsin.  Those efforts may include planting more jack pine or reducing the frequency at which those stands are harvested, as well as removing brush that’s not suitable for nesting.

Staffen said they hope to maintain biodiversity and prevent the loss of another species. Only six birds are now extinct from Wisconsin, including the disappearance of the passenger pigeon in the early 1900s.