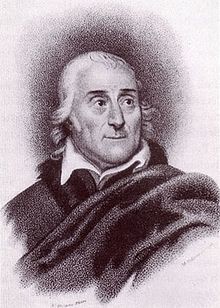 After writing the librettos to operas by Mozart, Salieri, Gluck, and other prominent composers, Lorenzo Da Ponte fell on hard times and sailed for brighter prospects in America. But, after a stint as a grocer in New York led to more financial setbacks, he was again insolvent. By December 1807, without money or friends, he was desperate for a way to support his family.

He determined that New Yorkers had little interest in a teacher of Latin and Italian.

But on a whim, he entered a bookstore and asked the proprietor if he had any Italian books in stock. The store had a few, but nobody ever asked for them.

Just then a Professor Moore walked into the store and joined the conversation. He was  well-versed in the Latin classics, but he placed limited value on modern Italian literature. Da Ponte made a convincing case for studying it, though, and within three days the professor had sent twelve students to him to learn Italian.

“I began my career as a teacher in New York,” Da Ponte wrote in his memoirs, “under the happiest auspices.”

Professor Moore was well-connected to cultural and academic life in the city. He taught Biblical learning at General Theological Seminary; and within a month he had sent twenty-four students to Da Ponte. Before long, Moore had become a zealous proponent of Italian literature.

With Moore’s recommendation, Da Ponte became the first professor of Italian at Columbia College, the forerunner of Columbia University. Over the years, he taught more than five hundred students.

As for Professor Clement Clarke Moore, he remained a lifelong friend of Da Ponte and continued to be a major force in New York cultural life. His most important scholarly work was his Hebrew and English Lexicon, but he’s best remembered today for writing a poem that drew on none of his erudition--“A Visit from St. Nicholas,” popularly known as “’Twas the Night Before Christmas.”