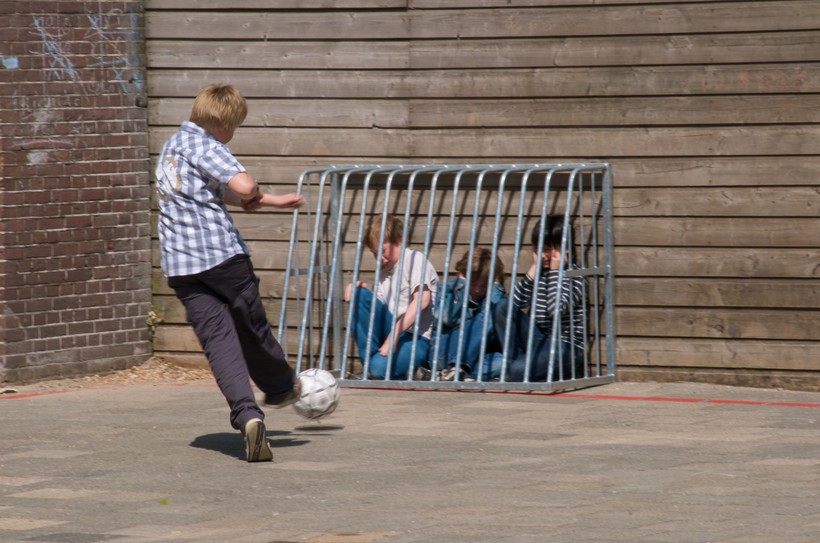 Confronting Bullies And The Culture That Creates Them

The bully is a seemingly ubiquitous character in American childhood. Schoolyard tormentors and neighborhood toughs inundate our popular imagination — as well as public policy. There are now laws in all 50 states addressing bullying in schools, and many include protections for specific minority groups and special provisions for cyberbullying.

But even with the widespread belief that bullying is bad behavior, there’s far from a consensus on where bullying comes from or what to do about it. Is bullying a personal psychological problem that only affects the bully and the target? Is bullying built into the fabric of our social, educational and economic structures? Or, is bullying just a part of growing up?

The Wrath Of Caesar

Many bullies leave a lasting — even lifelong — impression. Author Allen Kurzweil found his bully online some 40 years after they had last met, and it still scared him. But Kurzweil wanted vindication, so he set out to track his bully down.

When Kurzweil was 10, his boarding school roommate was a boy two years his senior named Caesar Augustus Viana III. Viana had subjected Kurzweil to physical and emotional torture, including a session of whipping set to the music of "Jesus Christ Superstar" and the theft of a wristwatch that was Kurzweil's only link to his deceased father.

Ultimately, Kurzweil never got the closure he wanted when he met with him decades later. "He insisted that we never even roomed together," Kurzweil said. "He did not acknowledge that he, in fact, had done any of the things that I recalled him having done."

Once A Bully, Now A Friend

Some confrontations have more satisfying results. In 2010, writer Alex Abramovitch traveled to Oakland when he learned that his childhood bully, Trevor Latham, was the president of a motorcycle club there. While he was horrified to witness the "honest to goodness fight club" that Latham's group sponsored, Abramovitch found something even more surprising in Latham: a friend.

Latham, it turned out, remembers their elementary school days quite differently. Even though they often got in brutal fights, they were outcasts together, he said. "I remember playing chess with him, cleaning erasers and just being stuck in the principal's office and having to talk to each other."

Abramovitch discovered that even today, Latham's club's members see playful fighting as a way to be close to each other. It made him reevaluate his youthful violent encounters with Latham.

"For Trevor, the sum total of all those experiences meant that we were friends, and for me, it meant that we bullied each other," Abramovitch said.

Whatever the nature of a bullying relationship, there is widespread agreement that schools need to play a more active role in combating childhood bullying. That's due, in part, to the fact that bullying can now be done online, said Emily Bazelon, author of a book on bully culture.

"It feels very 24/7 to kids now," she said. "When I was in eighth grade and having a miserable time of it, feeling like a victim of bullying, I would go home at the end of the day and I had a break. I didn't have this awareness hanging over me that kids could still be talking about me, still be writing mean stuff that would then be permanent and visible to anyone who looked at it on the internet."

With more online avenues for bullies to act without consequence, schools must adopt a new curriculum that addresses students' social and emotional development, Bazelon said. The institutions that succeed at this don't frame it as purely an anti-bullying campaign.

"The schools feel like they're invested in the human beings, as well as the academic potential of kids," she said.

To fight the root causes of bully culture in the U.S., we must fundamentally alter our country's economic and political order, sociologist Charles Derber said. Although he doesn’t discount the childhood pathologies generally viewed as the heart of bullying, he said that "the psychology may be real, but it grows out of structural, institutional realities that define the way the larger society operates."

Capitalism itself is responsible for many of those structural realities, according to Derber. He said that most people don’t have the means to survive without placing themselves on the labor market, which leads to a harmful power dynamic he calls "capital bullying."

"You get hired and fired in a pretty random way," he said. "So the most obvious form of bullying that's baked into our capitalist economic system is that most workers are vulnerable to this constant dread and anxiety that they have to be super careful not to alienate people who have the authority to let them go."

If a bullying relationship is built into so many people's livelihoods, Derber said, we should hardly be surprised that it emerges in our children's interactions.

Editor's Note: This article is based on interviews in the most recent episode of the "To the Best of Our Knowledge" podcast. Listen and subscribe here.