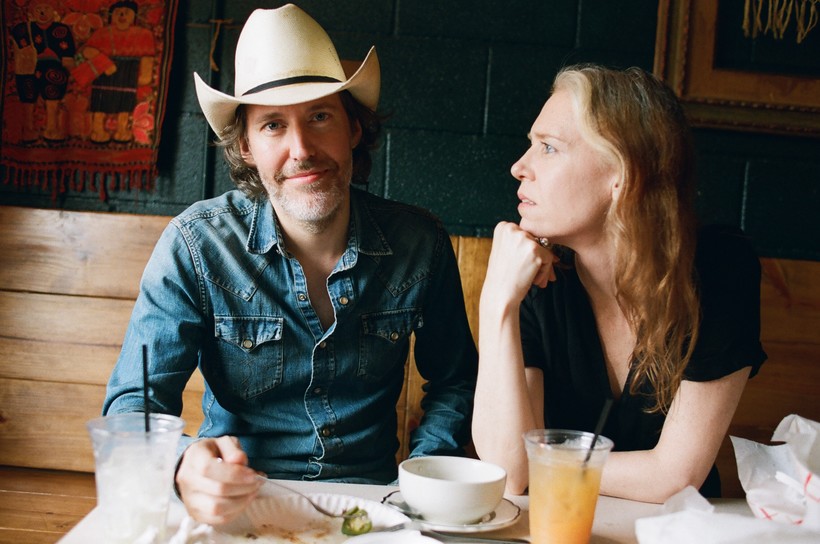 MADISON, Wis. -- It was still only hours before the official start of Halloween, but the members of the Dave Rawlings Machine were already in costume when they took the stage of Madison's Capitol Theater on Friday night.

Instead of dressing in ghoulish getups as ghosts, vampires or werewolves, this five-piece Appalachia-loving string band led by guitarist Dave Rawlings and his musical partner Gillian Welch were decked out like every rural archetype imaginable: a Levis-clad cowboy, a couple of backwoods parsons and a pair of sexy women of the prairie. And there wasn't a rhinestone Nudie suit in sight.

But, this wasn't just some Halloween prank. They were just getting into character. Starting with country music icons like Hank Williams through Nashville's elites today, roots-minded musicians still adhere to the importance of putting a little show in show business. Thus, we have the music's love of sequins-splattered suits, wide-brimmed hats and ridiculously adorned boots. But even for musical renegades like Rawlings and Welch, who represent a musical and stylistic break from much of what today's Nashville represents, showing up in the spotlight in a T-shirt and jeans is inconceivable. They see themselves as part of a tradition -- maybe the best part -- and one they seek to preserve and protect in spite of where mainstream country music is headed.

And it was the spirit of keeping the music alive and evangelizing for these songs that became the chief targets of Friday's 21-song set. Call it Americana or roots music or alt-country, but this music -- which blends folk, bluegrass, blues, gospel, old-school country and rock 'n' roll -- has two awe-inspiring missionaries in Rawlings and Welch. With such a mission before them, this troupe had an expert routine to preach to the soon-to-be faithful. (Such is the power of their message that recent tours have featured John Paul Jones of Led Zeppelin sitting in with the Machine on mandolin.)

This evening was a perfect celebration of musical traditionalism and the ever-expanding American songbook. The performances were extraordinary and fun-filled. And the musical vision these players offered included plenty of old-timey favorites, but was progressive enough to feature Rawlings and Welch's originals, as well as imaginative reinventions of songs by Bob Dylan, Woody Guthrie, the Band, Robyn Hitchcock and the pair's old buddy and fellow roots-y malcontent, Ryan Adams.

If the audience harbored any worries that this night was going to be a staid musicology lesson instead of a happy hootenanny, the Machine's first two songs made all those cares fade away. They emphasized the kind of mirth and lighthearted spirit that made the "O Brother Where Art Thou" soundtrack, of which Welch's voice was one of the essential contributors, so many newbies' entre into Americana music. A gleeful take on Jesse Fuller's "The Monkey and The Engineer" was a Jimmie Rogers-esque batch of cartoony folk that emphasized Rawlings and Welch's vocal harmonies and multi-instrumentalist Willie Watson's screaming harmonica. It was followed by "Candy," a Rawlings/Welch original that yielded a flatpicked, catch-me-if-you-can guitar line by Rawlings, a duck-and-weave fiddle solo and the kind of whimsical lyrics that brought smiles like it was Christmas morning to many in the crowd.

Although the concert was billed as the Dave Rawlings Machine and this incarnation of the band saw Welch bemusedly deferring to her partner instead of commanding center stage, in all honesty, this was a true ensemble. Watson, formerly of Old Crowe Medicine Show, was the third star attraction after Rawlings and Welch and took plenty of turns singing. Standup bassist Paul Kowert, of the Punch Brothers, provided the thump and thud that kept each rhythm running like a work song. The new recruit, fiddle player Brittany Haas, was the combo's shy secret weapon who could lace together any arrangement or step forward as the group's second-most formidable soloist (after Rawlings' quick fingerwork).

The quintet shifted through an impressive range of traditional song forms. Of course, they played to their strengths with the fire-and-brimstone stomp of the Monroe Brothers' "He Will Set Your Fields On Fire" or the yelping, hillbilly hoedown that was achieved with "It's Too Easy." In some cases, the group reinterpreted contemporary material to fit the group's down-home specialties. Hitchock's "Luminous Rose" was transformed into a ghostly mountain dirge while Dylan's "Approximately Queen Jane" became a laconic Western that featured an extended fiddle showpiece and Rawlings' signature flatpicking soloing.

All of these sonic dalliances were done with immobile grins on the musicians' faces. "We've neglected the banjo for too long," Rawlings said, chuckling, as he threw the instrument's strap over his shoulder and launched into a bluegrass reimagining of "To Be Young (Is to Be Sad, Is to Be High)," which Rawlings co-wrote and gave a rockabilly flair for Adams' "Heartbreaker" album. If Adams heard this rendition, he might have clawed this one back to keep for himself.

Other songs documented Rawlings' musical touchstones. The excellent "Ruby" is a clear descendant of the Rolling Stones' "Let It Bleed" country period. Likewise, the drifting country-rock of "The Weekend" could have been easily been tucked into Neil Young's "Harvest" album. "The Trip," a Dylan-ish epic in which Rawlings's vocals were a spoken-word narration, wandered into an interesting cat-and-mouse interplay between Rawlings' guitar and Haas' fiddle.

As great a player as Rawlings is, he's no Steve Vai. Instead of just allowing his six-string skills to wow, Rawlings really shone when he was the band leader and frontman. On "Short-Haired Woman Blues," a weeper that alt-country patron saint Gram Parsons would have claimed dibs on, Rawlings brought many of his influences together into a '70 musical saga. "Don't go chasing wild ponies," he warned. While we've heard this wisdom from the baby boom era before, such is Rawlings' passion as a re-interpreter that listeners will forget any sense we're hearing a copycat.

Trading off with the other personalities onstage didn't lead the show to falter either. Welch was so perfect that when she emerged from Rawlings' shadow for "Wayside/Back In Time" and "Look At Miss Ohio," most listeners might not have fully appreciated her brilliance. Watson, by contrast, made a powerful impression because he was a surprise when he stepped forward to take on old bluesman Charley Jordan's "Keep It Clean," a performance that would have been a hit at any honky tonk more than a half-century ago. When Watson led the audience in a call-and-response singalong for "Stew Ball" -- "it's getting too folky in here," he said -- the crowd was engaged and fully invested.

In a surprise changeup, the band members closed their second set by gathering in a circle to sing the acapella siren song of "Didn't Leave Nobody, But the Baby" from the "O Brother" soundtrack. Welch was a lovely overpowering presence -- chiefly because Rawlings or Watson aren't exactly Emmylou Harris or Alison Krauss in the vocal department -- but you hardly missed them or missed a beat. The addition of a foot stomp made this version the product of the most angelic of chain gangs instead of a bedtime lullaby.

One final encore had the Machine wheel out another familiar favorite in a new and exhilarating way to set the audience on the street with the right frame of mind. Most renditions of "The Weight" have typically turned into a tired, sloppy barroom singalong, but this band presented an original arrangement that revived the sanctity of this masterpiece and the country and gospel overtones of the music.  The tempo was mournful and meditative. There was plenty of room for the voices of Rawlings, Welch and Watson to stack and blend to great effect. This was a true musical redemption that could save souls.

As the crowd shuffled out to plan their next night's Halloween adventures, they did so with a kind of absolution that cleansed the ears and hopefully fired them to deepen their love of America's musical history. Rawlings and his Machine clearly view themselves as the instrument of salvation and they do their job very well.