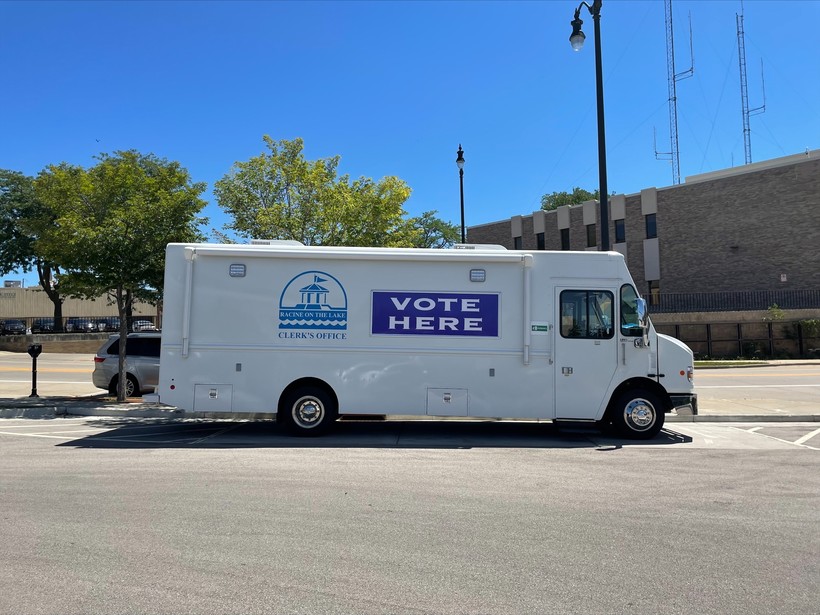 A conservative law firm is attempting to stop the city of Racine from using a truck as a location for in-person absentee voting.

The truck, or "mobile voting unit," was used for the first time in the February 2022 election, and was also used in the April 2022 election and again in this week’s partisan primary, according to Shannon Powell, chief of staff to Racine Mayor Cory Mason.

The Wisconsin Institute for Law and Liberty, or WILL, filed a complaint Wednesday seeking an order from the Wisconsin Elections Commission to prohibit Racine city clerk Tara McMenamin from using the vehicle during the November 2022 general election or any future elections. It also seeks to require that all in-person absentee voting take place in "fixed locations" that stay the same throughout the early voting period, and not take place in any sort of "mobile location."

The complaint alleges that the voting truck violates state statute because it moved to different locations throughout the early voting period, staying at each spot for a few hours.

"Conducting an election in this fashion leads to voter confusion," the complaint read, also alleging that the locations themselves favored the Democratic Party.

A list of the truck’s locations for in-person absentee voting for the partisan primary, including dates and times, was published in the Racine Journal Times and on the city’s website.

"The plain language of the statute contemplates that 'polling places' shall be in buildings and not in a transitory vehicle such as a van," the complaint read.

"Voters are told that voting is taking place, for example, at the community center, they're not necessarily told that it's actually a van in the parking lot," said Anthony LoCoco, WILL’s deputy counsel.

Also at issue is ballot security, said LoCoco. In an interview with the Associated Press, McMenamin said ballots cast were placed in a locked container.

Lesia Hill-Driver is the director of the Dr. John Bryant Community Center, where the truck was set up on the morning of Aug. 5. She said although there weren’t many people who showed up to vote that day, she was glad to have the vehicle there as an option.

"I thought it was a wonderful experience and it gave the people in the community an opportunity to get out and vote, which is so very important," she said.

Hill-Driver hopes the truck will be allowed to operate in future elections, and described the complaint as "frivolous."

"People need to have the opportunity to vote any legal way possible," she said.

LoCoco said the aim is not to make voting more difficult, but to correct actions that WILL believes are against the law.

"There's no dispute that voting is a right in Wisconsin," he said. "Our only concern here is making sure that the clerks follow the laws that are in effect."

The Wisconsin Supreme Court ruled that absentee ballot drop boxes are illegal in July. McMenamin told the Associated Press that the truck is different from a drop box because it’s not available 24 hours a day and is staffed.

The voting vehicle was purchased using money from the Center for Tech and Civic Life, a group funded by Facebook founder Mark Zuckerberg.