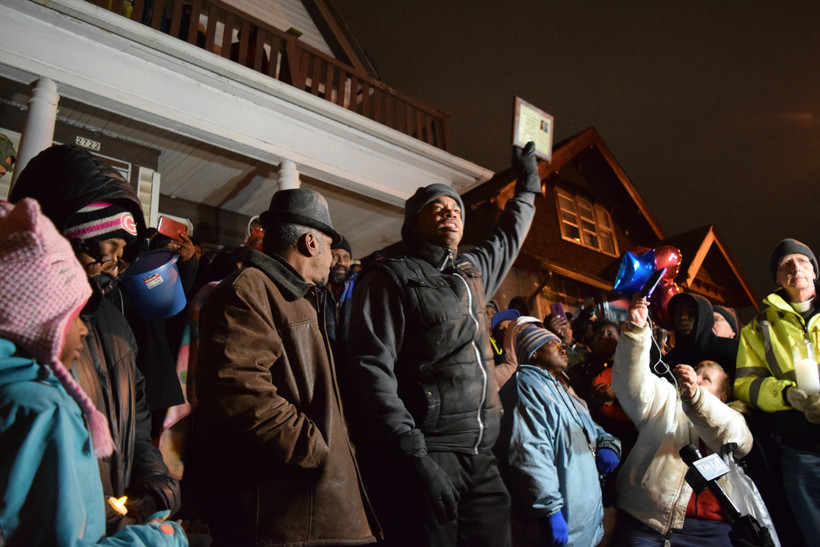 At a Tuesday, Nov. 20, 2018 vigil, Milwaukee community organizer Tracey Dent holds up a third place award that Sandra Parks won two years ago in an essay contest where she slammed violence in the city. Ximena Conde/WPR

'Don't Ever Forget My Baby' Says Mother Of Sandra Parks Who Was Killed By Gunfire
By Ximena Conde
Share:

Sandra Parks, 13, was in her Milwaukee home on Monday at about 8 p.m. when she was killed by shots fired from outside her hosue. On Tuesday night, members of the community and strangers from afar paid their respects in front of Parks' home.

"Today is a celebration of a 13-year-old, young princess on the verge of becoming a queen," said Tracey Dent, a community activist who helped lead the vigil to the more than two dozen people who came.

Attendees huddled together for warmth and lit candles for Sandra — whose nickname was Paris — while those who knew her fondly remembered her. A teacher said the girl was eager to learn and a class leader. Sandra's mother, Bernice Parks, recalled her daughter's artistry.

Sandra was in the eighth grade and loved to write — especially poetry. In sixth grade, a Martin Luther King Jr.-inspired essay that Sandra wrote won her a third-place plaque, which her family brought to the vigil. The essay — which Sandra shared on WPR in 2017 — lamented the violence in the city.

"Little children are victims of senseless gun violence," she wrote.

Sandra's mother asked people not to forget her daughter.

"I understand that there was a lot of kids that passed away recently and I wouldn't say that my baby was better than the rest but God, Jesus, Lord have mercy," said Bernice Parks, referring to the fact that her daughter is the seventh Milwaukee Public School student to be victim of a homicide this year. "Lord have mercy knows, she was a star that was trying to get out, but she didn't know how."

Other community activists and religious leaders prayed and called for the end to the violence.

"We have to change the culture. We can no longer live in these neighborhoods where these children cannot go outside or cannot go and stay in the house," said Tory Lowe, another community organizer.

Lowe said this isn't the first time this family has lost a family member due to violence.

While speaking to those at the vigil, Lowe called for a change in city leadership, a sentiment reiterated by others, including Minister William Muhammad of Muhammad Mosque No. 3.

"A leadership that understands the value of the resources that's in the community and not just infrastructure," Muhammad said. "Because if you invest in infrastructure and streetcars and build stadiums and what not, but you don't invest in the people, then the people will destroy what you built."

Cherise Dawson said doesn't live in the neighborhood, but she and her daughter were there to support the family. Dawson's daughter, Kendra Perkins, is 13-years-old and in the eighth grade.

"I would just be devastated if that happened to my kid in her own home, a place where you're supposed to be safe and you're not safe," Dawson said. "And she lost her life just in her own home. That's awful. Kids shouldn't have to be in that situation."

The Milwaukee Police Department said it had a person of interest in custody in connection with the shooting on Tuesday. The Milwaukee Journal Sentinel reported that another man was brought into custody for questioning later in the day.

Authorities are still working to determine if the home was targeted.

Editor's note: This story was corrected at 3:15 p.m. Monday, Nov. 26, 2018. MTEA first reported that 12 students died from homicide this year, it was actually seven this year, and 12 in two years, according to district spokespeople.