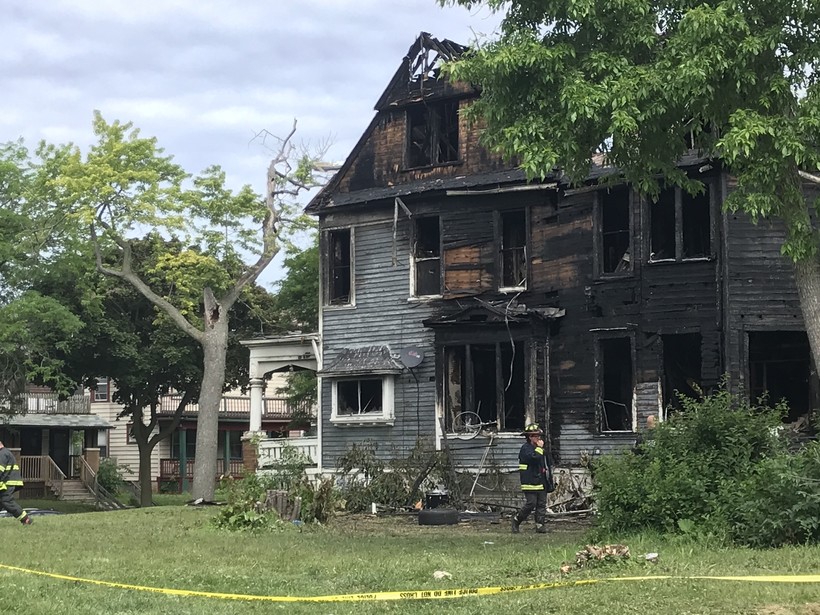 Inspectors from the Milwaukee Fire Department survey damage to a house in the 2100 block of North 40th Street. Madeline Fox/WPR

A search for two missing girls on Milwaukee’s west side on Tuesday intensified long-running tensions between the local community and law enforcement. By the end of the night, a house that police had searched several times was on fire, and several people were injured, including two teenagers, a 24-year-old man, seven police officers and a firefighter.

On Wednesday morning, as fire inspectors left the scene, local community members started arriving to help clean up the area.

Epiphany Conner was one of the first to arrive, with four kids in tow, a broom in hand and trash bags at the ready.

"I came out here to clean up because I wanted them to know not everyone is on destruction," she said. "Now that stuff has gotten torn up, and it got messy and chaotic, can we come back with love and healing and understanding with each other?"

Conner said she was with protesters at the house the previous day. Police, looking for two missing teenage girls who they said have since been found, went into the house several times, and when they came out empty-handed, many in the gathered crowd felt like they weren’t searching hard enough for the missing teens.

Conner "saw the spiral" of people getting agitated, which led to some eventually confronting police officers and setting fire to the building. She’s against that kind of destruction, which she said ultimately harms the community, but recognized that it came out of simmering tensions between law enforcement and local residents who feel police don’t respond quickly or adequately when children go missing.

"Even in my own family, we have kids that will go missing, and it’s so hard to push for an Amber Alert, and to even get that out there," she said. "So when you don’t feel like you’re being seen and you’re being heard, you don’t know who you can go to — and time is of the essence in situations like that." 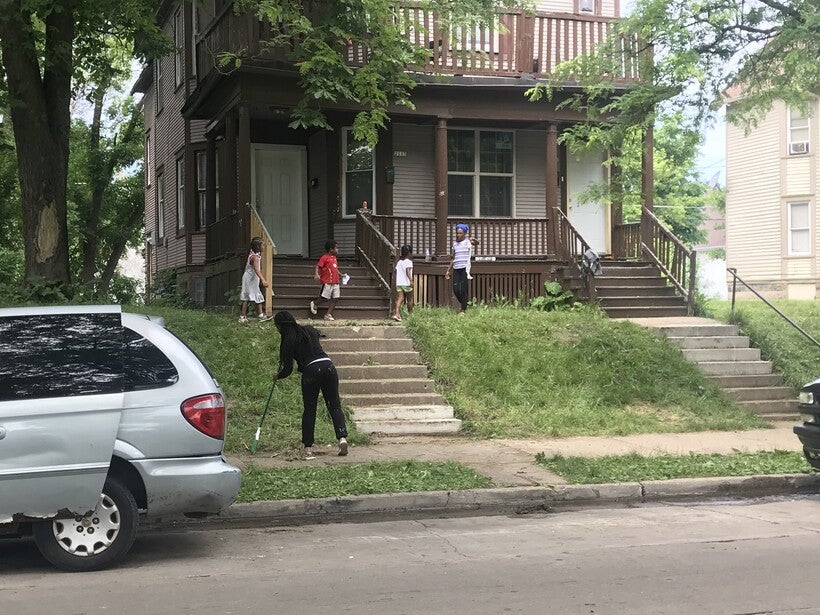 Epiphany Conner and her kids sweep up debris left over from Tuesday night protests around a house believed to be involved in human trafficking. More than a dozen people showed up to pick up trash. Madeline Fox/WPR

The fire department deferred comment about the house to the Milwaukee Police Department.

MPD released a statement Wednesday morning about the events of Tuesday night, saying they're still seeking suspects connected to the arson and to the fired shots. They said some people tried to enter the house to do their own check for the missing girls after police left and exchanged gunfire with the house’s residents. Then came what they described as "unruly behavior" — protesters throwing concrete and bricks at police and setting a couch, a car and the house on fire. Police Chief Alfonso Morales confirmed in a press conference Tuesday night that police used their "less lethal" tools, and fired off smoke devices. He didn’t go into specifics about what they used, but the Milwaukee Journal Sentinel reported Tuesday that officers fired tear gas and pepper spray into the crowd.

In the Wednesday morning written statement, police said the missing teenagers "at no point" qualified for an Amber Alert under the state guidelines, which didn’t pass muster with community members who had been following the case.

"From what I read about the criteria for the Amber Alert, in my opinion it did — but I’ll leave that to those who know more than I about that," said Dameon Ellzey, a legislative assistant for 15th District Alder Russell Stamper II who was there for the Tuesday protests and helped coordinate the Wednesday morning cleanup.

Ellzey said he’s been hearing a lot of frustration from residents of the 15th District about how police handle missing kids.

"What happened yesterday is indicative of what happens a lot in the Black community — when we make complaints, it goes unheard, and not until we decide we’ve had enough and we set something on fire does it get the attention it deserves," he said. "It shouldn’t be that way, we should be able to make that call and it get immediate attention, and get the immediate response that the community is asking for."

In the aftermath of Tuesday night’s events, Ellzey called Joe Wilson, with Keep Greater Milwaukee Beautiful. He brought out a trailer full of buckets, trash bags, gloves, yard tools, trash pickers and other supplies to help community members deal with the trash and other debris scattered around the burned house Wednesday morning. More than a dozen people turned up to help.

"We helped yesterday, as far as what was going on — today, we wanted to come and help clean up," said Tylin Peters, who also came out to pick up trash. "The more it’s cleaned up, the more positive people start thinking."