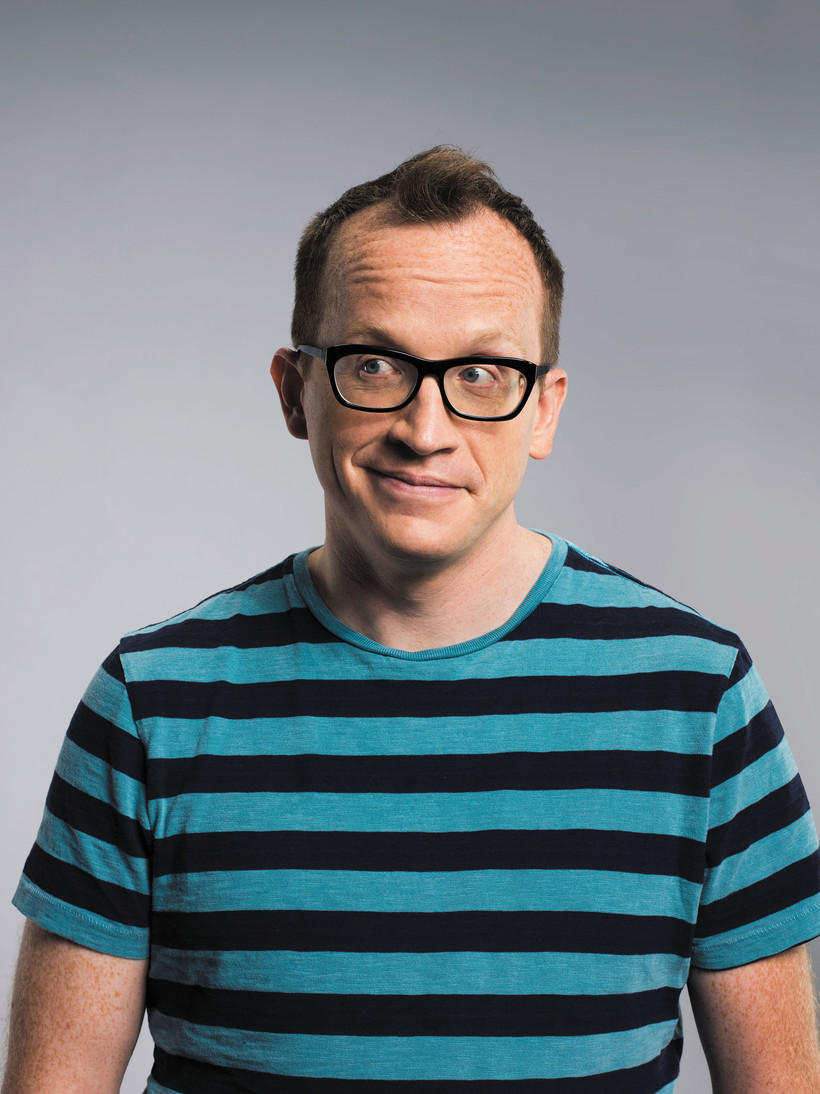 Comedian Chris Gethard has a history of putting his own spin on stand-up comedy.

He once staged a tournament where two comedians would have five minutes to be funnier than the other one. The winner advanced and the loser was shot with a paintball gun.

Gethard used to think his ideas were too weird. But not anymore. He’s written a memoir — called "Lose Well" — in which he encourages us to embrace failure.

Gethard told WPR's "BETA" that the best advice he ever got was from the therapist he started seeing in 2007. He was 26 years old and he'd been doing comedy for seven years.

"And she made it really clear that you've got to give yourself no other option at some point," Gethard said. "You either go all in or you don’t, but you don’t just sit on the fence forever. She said cut off every source of income you have that’s not the type of thing you would want to do, whether that’s acting or performing or writing comedy. And I explained to her that it was a very bad idea because I paid my rent through all my freelance gigs. And she said 'Well, you can pay your rent forever and sit here panicking or you can go all in.'"

"And she made something very clear, which has proven true to me in my life, which was: if you take this big swing and it doesn’t work out, you’re gonna be a lot happier than you are sitting in the middle ground."

So if Gethard is now able to recognize the success in his professional life, why is he promoting failure instead?

"I think especially as Americans, we are raised to have this idea of you pull yourself up by your bootstraps and you go make things happen," Get﻿h﻿ard explained. "And I think there’s some real nobility to that. I think there’s some real good advice in that. But I also think that it makes this issue very binary, very black and white, very much like this idea of you win or you lose and that’s that.

"And I think that when you commit to the idea that you might fail, and, in fact that when you do fail, that that’s OK, you start to find a middle ground. And the middle ground has so many more layers to it than that, it’s got such a broader spectrum of possibility than that. And what I’ve seen over and over again, in my own life and in people around me who work in creative fields, non-creative fields, is that when you embrace the idea that you might fail, you very often get to happiness quicker."

In "Lose Well," Gethard writes that when he stopped chasing success, he let the inner truth of his loser nature rise to the surface.

"A lot of that for me comes through a habit I think many of us fall into, which is comparing yourself to your peers," Gethard said. "So I was coming up in the New York comedy scene in an era when it was really hot. The theater I was working at, it was called the Upright Citizens Brigade. My two best friends in my improv group at the time were Bobby Moynihan, who got cast on 'SNL,' and Zach Woods, who got cast on 'The Office.' So I would see other people’s success and that made me feel like a real loser.

"And when I just kind of decided not to care about relative success or other people’s definition of success, I started to realize that maybe at the end of the day I have struck out, it really allowed me to know myself better. It allowed my audiences to know me a little bit better. My work became a lot more vulnerable, a lot more open and honest. And all of that came with just realizing, man, I’m the loser of my gang, I’m the one who missed."

Gethard used to worry that his ideas were too weird and that they were preventing him from having a successful career. It was a conversation with Anthony King, the artistic director of the Upright Citizens Brigade Theatre that helped Gethard realize he was mistaken.

"He's (King) the one who said to me, 'You gotta make a show that's just this stuff. This is what everybody loves from you. Why aren't you just embracing it?' And he forced me to name it 'The Chris Gethard Show' which proved to be a huge benefit to my career, the idea that I branded my name on this idea of this aggressive New York weirdness comedy. And it took me way too long and I was pretty obtuse. And there were many times when I could have embraced who I was and I didn't," Gethard said.

"With that show ('The Chris Gethard Show'), every episode was weirder than the last. It kind of became this community-driven attempt to top ourselves. There was one time when a random studio audience member came on camera when we were still on public access and started beating me with a flog. That was not a great moment in my life. I had kickboxers beat me up, I've had dominatrices beat me up. I've been doused in almost every substance. We once did a bit called 'The Human Crane' where my effort was to make myself the claw on a big human-sized version of  the claw machine game from the arcade."

For the past decade, Gethard has employed a mantra which he describes as "goofy, and a little embarrassing." It's a two-word phrase that he says to himself when he's writing, strategizing or thinking big: Funny plus.

"Funny plus. That's become a very informative thing to me," he said. "That's just the idea that you should at the end of the day seek to raise the bar, not just meet it. When you start out at something, you're bad at it. You want to just get good at it. So you look around at the people who are good at it and you go, 'I want to be as good as they are.' And I would say, 'No, try to be better than they are.' And I'd argue the way to do that is to add something to it."

So how has this "funny plus" concept influenced Gethard's podcast, "Beautiful/Anonymous: Beautiful Stories from Anonymous People"?

"The whole show is I just take a phone call and I talk to someone for an hour. They never tell me their name, I'm not allowed to hang up. It's as simple as that. And I thought it was going to be kind of an extension of my TV show where people would be prank calling me," he said. "It instead became a thing where people tell me their dark secrets, people tell me their stresses. And I realized it's funny, plus it's very empathetic."