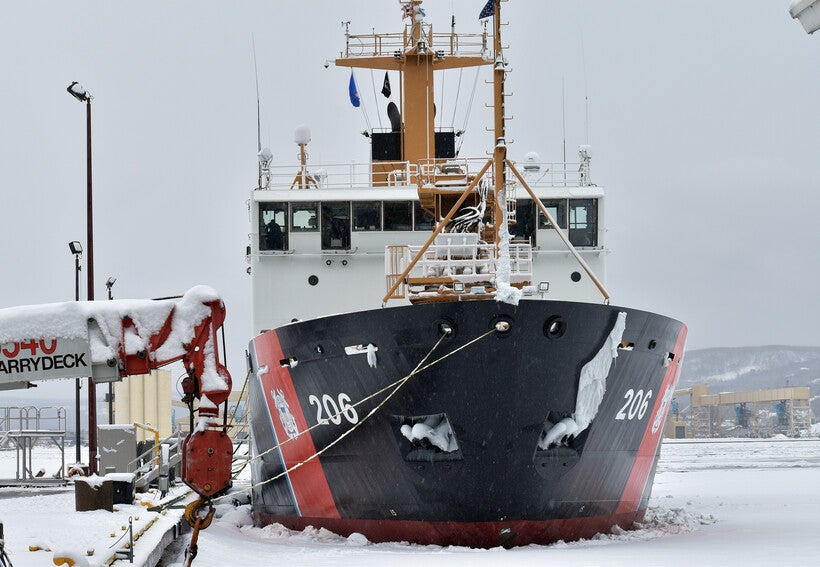 After a year of maintenance, a U.S. Coast Guard vessel arrived in Duluth on Wednesday that will break up ice for ships moving through Lake Superior and northern Lake Michigan. The vessel’s arrival comes as Congressional lawmakers are pushing for another heavy icebreaker on the Great Lakes.

The 225-foot Coast Guard cutter Spar ended its journey from Baltimore after undergoing repairs. The vessel was commissioned in 2001, built in Marinette, Wisconsin, and originally based in Kodiak, Alaska. The vessel replaces the Coast Guard cutter Alder, which left the port last summer for maintenance before being transferred to San Francisco. 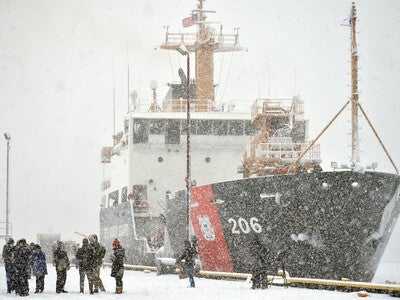 The U.S. Coast Guard cutter Spar moors in its new home port of Duluth-Superior on Wednesday, March 30, 2022. The vessel will break up ice for vessels transiting Lake Superior and northern Lake Michigan. Congressional lawmakers have introduced legislation to authorize funding for additional icebreakers on the Great Lakes. Danielle Kaeding/WPR

"There was nine vessels in ice, and some of them had been sitting there for a few days waiting for help," said Wright. "So the winds were not in our favor the last week. Yesterday, they shifted and that helped us get through, as well as get all these vessels out. So, (Lake) Superior’s still got a lot of ice."

Ice cover on Lake Superior reached its peak in mid-March when nearly 80 percent of the lake was frozen. Now, just under 40 percent of the lake is covered in ice. Even so, ice has slowed the movement of vessels following the start of the shipping season on Friday with the opening of the Soo Locks.

"There have been a number of ships that have been trying to cross Lake Superior that have been caught up in the ice and needing a lot of assistance from the Coast Guard, so it definitely is not a good thing when it comes to a business where time is money," said Jayson Hron, communications director with the Duluth Seaway Port Authority. 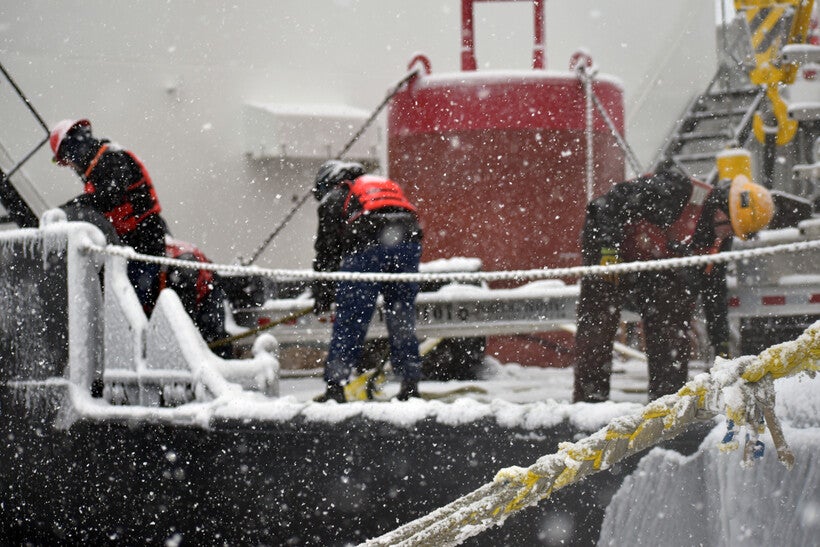 The crew of the U.S. Coast Guard cutter Spar conduct work on the vessel after it moored Wednesday, March 30, 2022, in its new home port of Duluth-Superior. Danielle Kaeding/WPR

The ice has been particularly challenging near Whitefish Point, according to Eric Peace, vice president of the Lake Carriers’ Association. He said three vessels have been stuck there for several days, including the American Century, Burns Harbor and Dirk S. VanEnkevort.

Peace said all three are headed for ports in the lower lakes.

"And that’s vitally important because they're carrying iron ore, which is needed to be put on the dock, so those steel mills can continue to operate," said Peace. 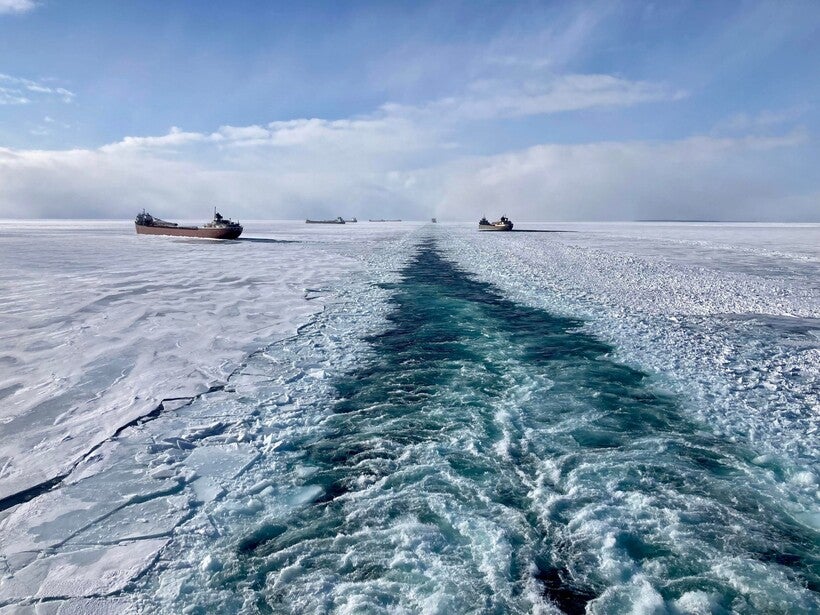 Vessels have been stuck for days in thick ice on Lake Superior. Photo courtesy of the Lake Carriers' Association

Republican U.S. Rep. Mike Gallagher and Democratic U.S. Sen. Tammy Baldwin have both introduced legislation known as the Great Lakes Winter Commerce Act. Both have previously put forth proposals to increase icebreaking capacity on the lakes. The bills would authorize $350 million for another heavy icebreaker like the Mackinaw.

Gallagher’s proposal passed the U.S. House on Tuesday as part of the Coast Guard Reauthorization Act.

"I’m thrilled to see it pass the House and urge my colleagues in the Senate to quickly pass this bipartisan bill to ensure that we keep the Great Lakes economy moving – no matter the weather," said Gallagher in a statement.

Sen. Baldwin agreed in a statement that more capacity is needed to strengthen the supply chain and keep commerce moving.

"I’ve been working on this for the last five years, and I’m proud to see this bipartisan effort move forward and bring the Great Lakes region closer to getting the sufficient icebreaking resources needed to support Wisconsin businesses and workers," said Baldwin.

The Coast Guard has been seeking more icebreakers, but its highest priority is to add cutters in the offshore and polar regions. The U.S. Department of Homeland Security said in 2020 that a preliminary analysis shows there's a "limited operational need" for another Mackinaw in the Great Lakes.

As vessels became lodged in the ice on Tuesday, Coast Guard Chief Warrant Officer David Browne with the Spar said the cutter followed behind the Mackinaw as it broke a path for ships. The Spar also helped free vessels along the way. 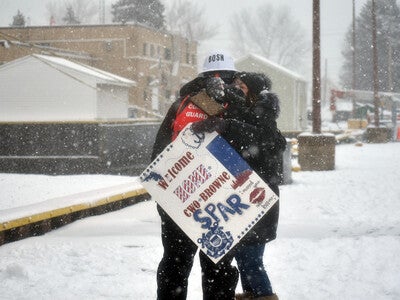 Nicole Browne hugs her husband David on Wednesday, March 30, 2022, after he had been gone several months with the Coast Guard cutter Spar. The vessel was undergoing maintenance in Baltimore before traveling to its new home port of Duluth-Superior. Danielle Kaeding/WPR

"They'll get stuck as the ice closes back in, and we just kind of make a little loop around them and break them out," said Browne.

Browne’s wife Nicole and their daughter greeted him and other crew members as the vessel moored in Duluth on Wednesday.

"First thing I want is a big old hug and kiss, but then I'm no longer shoveling snow. That’s his job now," laughed Nicole.

David smiled, seemingly unphased by the shift from icebreaking to shoveling.

"That's okay," said Browne. "I haven't seen the snow in a little while."