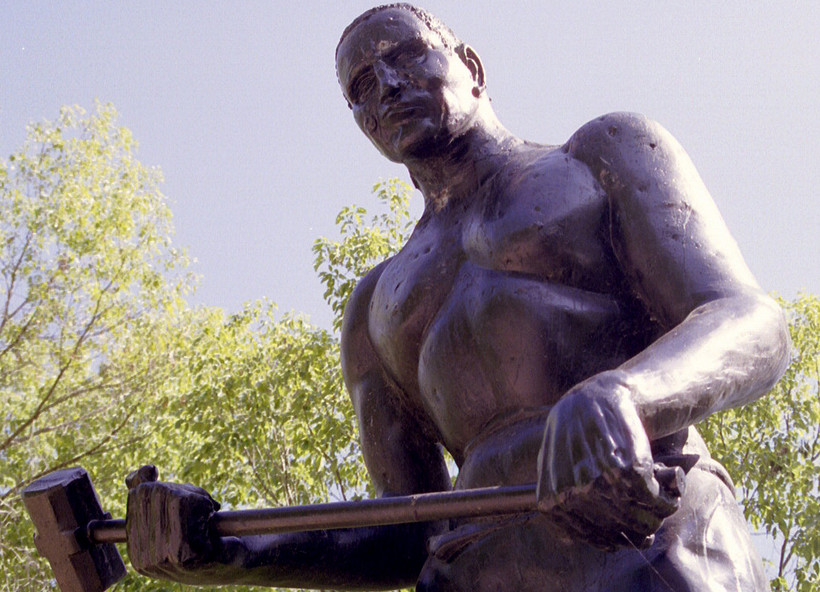 "Human versus machine" is a common theme in books and movies these days. From fears of a dystopian future ruled by artificial intelligence to today's struggle to make driverless cars safe.

This push and pull seen in an uncertain future can be seen in Stanley Kubrick's 1968 film, "2001: A Space Odyssey" (based on the short story by sci-fi legend Arthur C. Clarke), but the humans-versus-machine conflict probably got its start with the Industrial Revolution.

These stories pose a common question: What do humans do when their work — their livelihood and part of their identity — can be replaced by a machine and even done better? One answer is, they stand up for their dignity ... at least that's what John Henry did.

The old folk song, "John Henry," tells the story of a black man who stood up to the new technology of the day, a steam drill. He gets in a contest driving railroad spikes with the drill, but, in a way, he's really standing up to the those in power who would replace him so easily for greater efficiency and, presumably, greater profit.

Some contend that John Henry was a real person, a man emancipated from slavery, then imprisoned, and later found himself working on the construction of the C&O Railroad. Others believe that the truth of his existence can't be proven.

In any case, what isn't debatable is the importance of Henry's story to the African-American community, with its themes of dignity and power. Over time, he became a folk hero to many more people, from coal miners and railroad workers to prison work gangs, labor unions and more.

While versions of the "John Henry" song vary, most start out with lyrics similar to this rendition that folk-music legend Pete Seeger would play:

From there, the story jumps his time working on the railroad driving spikes, when his boss, the Captain, says the steam drill is coming to do John Henry's work. His response is:

So, the contest begins, and John Henry beats the steam drill, but at a price:

Here’s a version of the song by Sonny Terry and Brownie McGhee:

Sometimes, she's mentioned early in the song, and sometimes, it's after John’s death, but his wife, Polly Ann, continues the struggle for dignity and empowerment:

In the voices of Our Native Daughters, the story of Polly Ann becomes a story of empowerment for women as well:

When Polly had a small baby
On her knee, on her knee
Grabbed a hammer in her left hand
"Ain't no one as strong as me"

There are other versions of "Hammer" songs that don’t explicitly mention John Henry, but have the same theme of empowerment, like the song, "Take This Hammer." Here’s a version from Leadbelly:

This song continues the themes found so prominently in "John Henry," breaking free from the boss’ or technology’s constraints, claiming dignity and power and ultimately freedom in life or death.

Take this hammer, carry it to the captain...
Tell him I'm gone.

I don’t want no cornbread and molasses...
It hurts my pride.

Humans versus machines, or technology, or the use of those tools to dehumanize us — from the Industrial Revolution on, it is an old tale that folk music frequently captures. The folk tradition has given us the song "John Henry," but one wonders what songs will be sung in the future about our struggle to use wisely the technology we're now inventing.