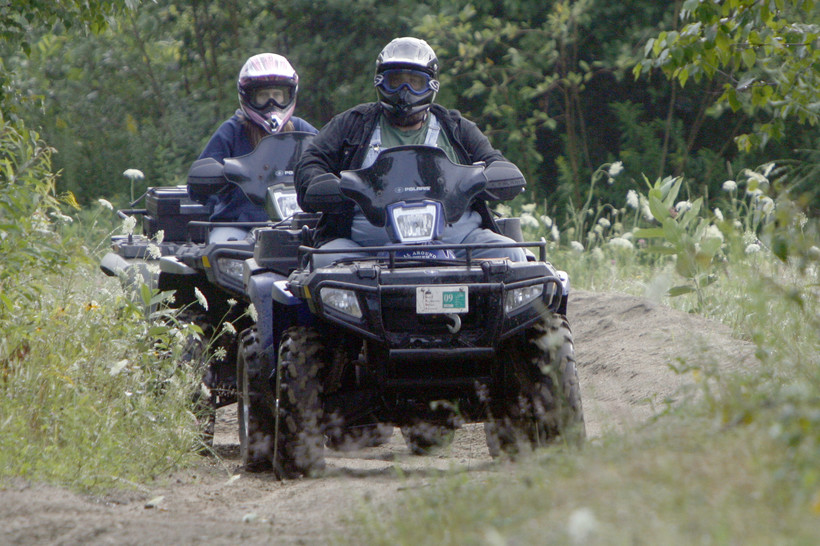 Citizens Group Wants To Keep ATVs Out Of Northwoods Town

A citizens group in the Northwoods wants to keep all-terrain vehicles out of their town. Their efforts come in response to years of state laws and local government policies making more and more places accessible to the motorized vehicles.

The Alliance to Preserve Boulder Junction has as a goal of keeping the community of about 1,000 a refuge and a haven for quiet sports such as biking, fishing and hiking. The group of about 120 members says the economic benefits of ATV trails have been overstated, and that the trend in Wisconsin toward opening more trails and local roads to the vehicles ought to be checked.

A 2015 law required the state Department of Natural Resources to map all roads on all its properties and begin the process of "prepar(ing) a plan for allowing the public to use motorized vehicles" on the property. This has led to the creation of miles of new trails. In 2017, the DNR approved 200 miles of new ATV routes through the Northern Highland-American Legion State Forest, the largest state forest and an area near Boulder Junction.

Anne Brouwer, a spokeswoman for the alliance, has lived in Boulder Junction all her life. Her grandfather helped establish the YMCA Camp Manito-Wish, where today thousands of students spend summers camping and taking canoe trips. She said the region’s connection to the wilderness is its main economic asset, and that’s something too many loud ATV motors could put in jeopardy.

Boulder Junction, Brouwer said, "has a long history, since the logging days, of being a town that’s been built on the enjoyment of this ecologically important area of the state, and appreciating the quiet sports."

ATV advocates and some business leaders argue expanded access for the vehicles will boost the local economy.

Lee Hoffman, president of the Boulder Junction ATV/UTV Club, said that's his main interest in the issue. With Boulder Junction's population aging and many business owners retiring, the town needs an influx of ATV tourists, especially in its slow seasons of spring and fall.

"Our economy is tourist-based," said Hoffman, who also owns a local restaurant. "We're trying to fill the gaps in the slow times."

ATVing, he said, "brings young people to the area and also keeps younger people that we can employ." He noted that Vilas County, which has added ATV trails, has seen a boost in its tourist traffic.

The growth of the hobby throughout the state and the nation is clear.

According to the Sport Vehicle Institute of America, there are more than 11 million ATVs in the United States and more than 35 million riders. The organization claims average miles ridden has increased by 48 percent in the last five years.

The alliance, though, questions the data on the economic impact of ATV trails. Studies in Wisconsin and elsewhere have sought to track spending by ATV riders. But they don’t account for the potential economic costs that would come from discouraging those who come to town specifically for quiet sports.

Separately, they raise environmental concerns, including the risk of disruption for protected species such as osprey, and the potential that ATV traffic might spread invasive species.

"There is no such thing as an ATV wash that you pull into when you’re done and clean those vehicles" similar to expectations for boaters to minimize the spread of invasive species, Brouwer said.

ATV riding is also risky; there are dozens of deadly crashes per year, and data from the DNR show deaths in Wisconsin have increased in the last decade. There were 12 crash deaths in 2008; in 2017, 27 people lost their lives. But as ridership has increased, more communities across the state have opened local roads to riders.

The alliance’s goal is not to stop ATVers from riding, said member Tom Basting, but to carve out a place of refuge for those who want to be away from motor sports.

"There are a lot of ATV trails throughout the state," Basting said. "(There are) plenty of places for them to travel. We’d like to keep the quiet areas, and some wilderness, quiet."