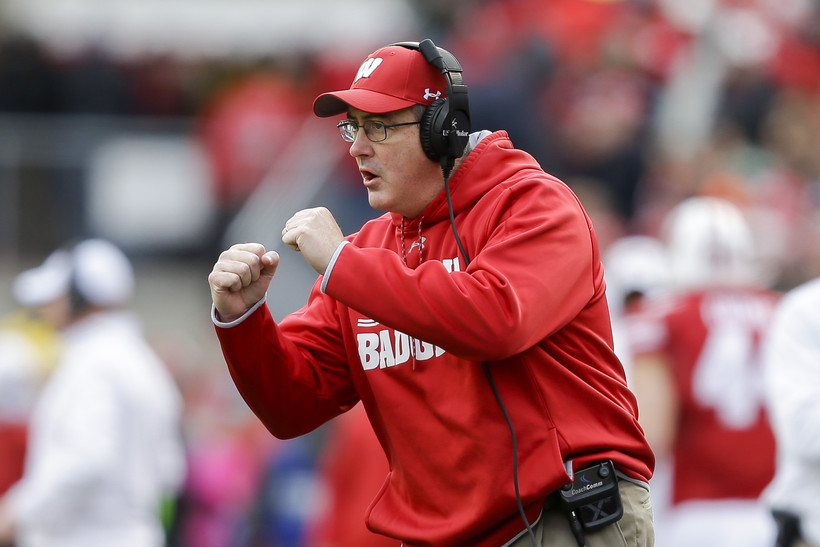 Wisconsin head coach Paul Chryst gestures during the first half of an NCAA college football game in Madison. Wisconsin will head into spring practice with plenty of questions as the Badgers attempt to replace their top play makers from a team that reached the Rose Bowl last season. Andy Manis/AP Photo

Head Coach Paul Chryst Says He's 'Excited To See If We Can Make The Most Out Of This Spring'
By Megan Hart
Share:

Head coach Paul Chryst told reporters Monday the team would begin with drills. He said transitioning into full practices will allow the players to make the most of its 15 spring sessions, the maximum number allowed by the NCAA. The Badgers' final spring practice will be held April 18 at Camp Randall Stadium, which will be open to the public.

Chryst said the offseason has four distinct phases: winter conditioning, spring football, summer conditioning and fall camp. The team put in a lot of work in the weight room this winter, he said. His focus is on player development this spring, he added.

During Monday's news conference, Chryst discussed several position groups. There will be plenty of snaps to go around when it comes to quarterbacks, he said. There is expected to be competition for the position this year.

Returning starter Jack Coan will be a senior next season. Last year, he recorded the second-highest quarterback rating in school history behind Russell Wilson's 2011 mark. Wilson is now starting quarterback for the Seattle Seahawks.

Graham Mertz, who will be a sophomore, was a four-star recruit coming out of high school. He received offers to play at other top programs including the University of Alabama and Clemson University. He’s also likely to contend for the starting job.

Chryst said all four quarterbacks on Wisconsin’s roster do a good job of pushing each other.

"They've done a really good job of being competitive and kind of balancing that with being good teammates for each other," he said.

The Badgers lost key players at other skill positions to the NFL Draft. Jonathan Taylor, one of the most prolific rushers in college football history, appeared at the NFL Combine where he ran the fastest 40-yard dash of any running back. Wideout Quintez Cephus, who led the Badgers in receiving yards last season, also declared for the NFL.

"Each year plays out differently, but I like the group," he said.

Wisconsin is returning many of its starters on defense. Chryst singled out linebacker Jack Sanborn and defensive lineman Isaiahh Loudermilk and Garrett Rand as possible leaders of the experienced squad.

The Badgers will open their 2020 campaign in Madison against the Indiana Hoosiers on Sept. 4. It'll be the first time since 1982 they faced a Big Ten opponent in the first game of the year, according to Sports Illustrated.

"That's what's awesome about playing in the Big Ten, each week's big and it's going to start right from the get go," Chryst said.