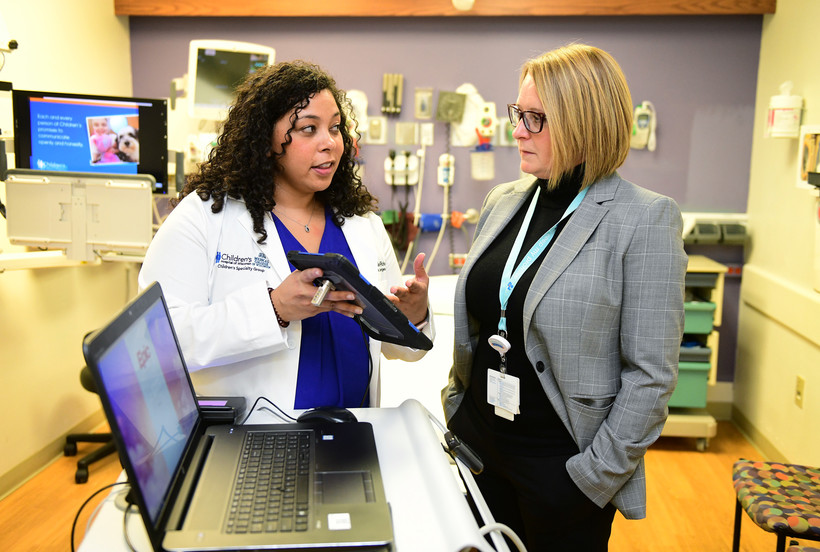 Amy Herbst, vice president for mental and behavioral health, talks with Dr. Michelle Pickett, an emergency medicine doctor at Children’s Wisconsin. Dr. Pickett is showing Herbst a suicide screening tool provided to every child who comes to the emergency room between the ages of 11 and 18. Photo courtesy of Children's Wisconsin

Behavioral Health Specialists Will Be Added To All Pediatric Clinics By 2023
By Corrinne Hess
Share:

Children’s Wisconsin plans to have a behavioral health therapist in every pediatrician’s office by the end of 2023 to help diagnose and treat pediatric mental health conditions at the onset of symptoms. This initiative is made possible by the Yabuki Family Foundation's $20 million donation, the largest single-gift in the Milwaukee-based health system’s history.

When fully staffed in 2023, the program has the potential to benefit more than a third of the pediatric population in southeastern Wisconsin. More than 175,000 children are seen by Children’s Wisconsin pediatricians during routine checkups or at an urgent care visit, according to the system.

Therapists and pediatricians will collaborate on the spot to address concerns such as anxiety, depression, trauma and suicidal ideation, as well as attention difficulties, sleep challenges and disruptive behaviors.

The Yabuki Family Foundation was established by Jeff Yabuki, who served as CEO of Wisconsin-based Fiserv from 2005 to 2020. Under Yabuki’s leadership in 2018, Fiserv acquired the naming rights to Fiserv Forum, home of the Milwaukee Bucks.

Yabuki’s brother, Craig Yabuki, died by suicide in 2017, leaving behind a wife and three young children. Jeff said his younger brother’s depression went undiagnosed during childhood, and he wanted to create a meaningful change for children in Wisconsin with the $20 million gift.

The Yabuki family has designated $5 million as a Change the Checkup Challenge in which every additional gift for this program will be matched dollar-for-dollar.

"Through our partnership, we intend to significantly advance the manner in which mental and behavioral health issues in children are diagnosed, reduce the stigma, and enable care — when needed — to be delivered in a fully integrated way," Yabuki said in a written statement. "Whether a child has an earache or is feeling anxiety, we are helping families to address mental and physical health, together, and with equal importance."

According to Children’s Wisconsin, more than half of individuals who struggle with mental health conditions in their lifetime start experiencing symptoms before the age of 14, but the average length of time between when symptoms appear and treatment begins is often more than 10 years.

"In Wisconsin, 1 in 5 children is living with a serious mental illness and hospitalization rates for mental health conditions are nearly four times the national average," Peggy Troy, president and CEO of Children’s Wisconsin, said in a written statement. "Given our size, reach and commitment, Children’s Wisconsin is uniquely positioned to drive better outcomes by permanently changing our primary care model to ensure mental health is prioritized at the same level as physical health."