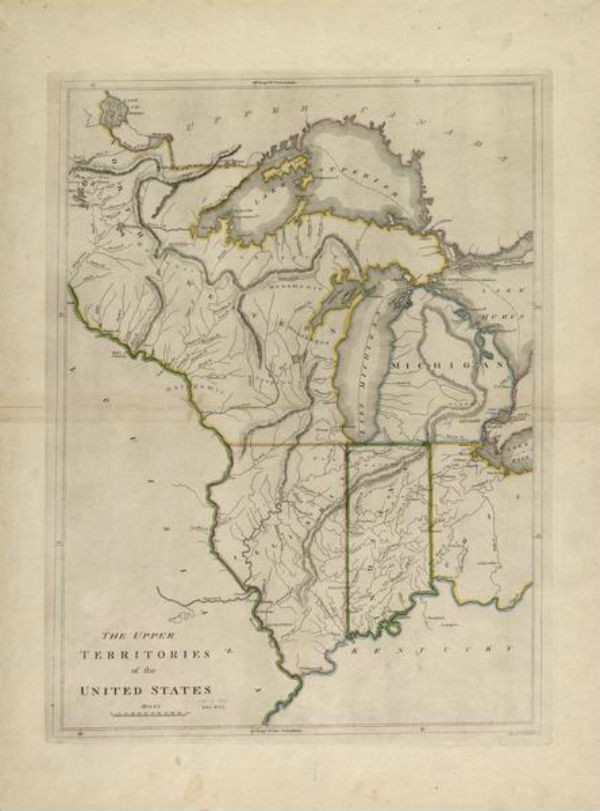 Chicago, Wisconsin? How The Windy City Almost Ended Up In The Badger State

On Dec. 3, 1818, Wisconsin's neighbor to the south, Illinois, became the 21st state. In so doing, Wisconsin lost approximately 8,500 square miles of territory allotted to us in the 1787 Northwest Ordinance … land that included the Illinois cities of Galena, Rockford, and Chicago.

In the late 18th century, when American leaders were envisioning the expansion of the fledgling United States, they drafted a plan for how new states might be added to the union. One of the men who helped draft the ordinance, Nathan Dane, a Massachusetts attorney, is the namesake for Wisconsin’s Dane County. Their plan for surveying territories and states envisioned a line through the southernmost tip of Lake Michigan straight out to the Mississippi River, as in the image above.

But in the early 19th century, national politics twisted our border a different way.

At the time, slave-holding southern states and free northern states were wrestling for control of Congress. Whenever a slave state entered the Union then the north hustled for a free state to compensate for the imbalance.

Mississippi, a slave state, entered the Union in 1817 so the north needed another state. Illinois seemed like the best bet but there was a problem in that most of the population lived in the southern part of the state. Many of these settlers were from Kentucky and Tennessee and tended to support slavery. But if Illinois was given a port on Lake Michigan, then it could develop trade ties to the free northeast and grow its northern population.

So, just as Congress voted on Illinois statehood, the resolution was amended to move the border 50 miles northward, robbing the future state of Wisconsin its territory, though we had too few citizens living here at the time to protest.

Protests did occur in northern Illinois, however, which voted to secede from Illinois and join the Wisconsin territory in the 1840s. These votes carried no weight, however, and when Wisconsin became a state in 1848, the border stayed just where it had been.