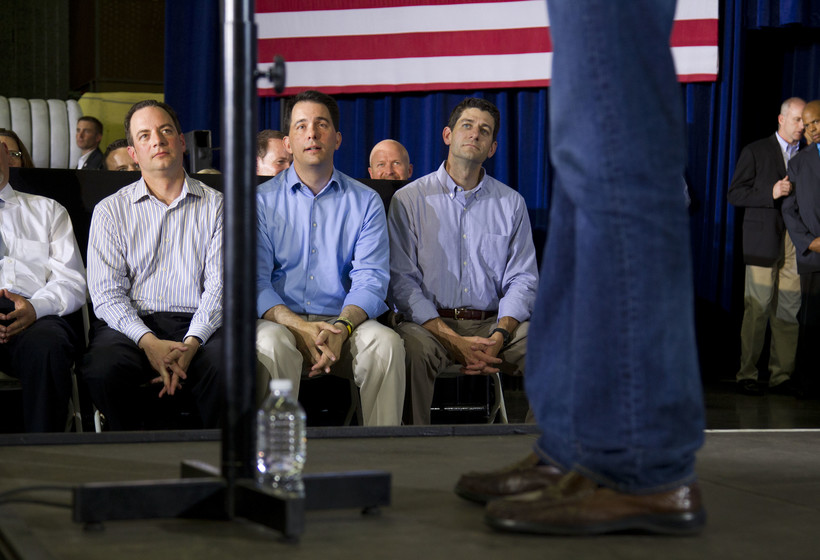 Is The 'Cheesehead Revolution' Over?

In 2010, three men from Wisconsin were becoming political stars on the national stage.

Scott Walker had just been elected governor of Wisconsin. Paul Ryan was building his profile as a U.S. congressman, later tapped as Mitt Romney’s presidential running mate. And Reince Priebus was chair of the state Republican Party, and later, the national party.

Their influence on the political scene — which Walker and Priebus themselves dubbed the "Cheesehead Revolution" — made popular a new kind of Reagan Republicanism in Wisconsin that swept the state in the beginning of this decade.

"They were in some ways conventional conservatives," says Craig Gilbert, Washington bureau chief for the Milwaukee Journal Sentinel. "But what they did, particularly Ryan and Walker, is they really pushed the envelope in trying to realize some fairly bold policy goals that had maybe been conservative goals in the past but people didn’t really think they were achievable."

But the band is breaking up. Does that mean the "Cheesehead Revolution" is over, too?

Ryan announced last month he would retire from Congress after finishing out his term. Priebus left the White House last summer after six months as chief of staff.

Walker alone remains. He’s up for re-election this fall.

As Gilbert writes in a recent piece, change is part of politics. But the "Cheesehead Revolution" was conceived in a different era.

The cracks started showing, Gilbert says, when the Romney-Ryan presidential ticket lost both nationally and in Wisconsin in 2012.

"I think in the case of Paul Ryan, the jury has always been out about whether some of the boldest policies he was pursuing were popular in a broad sense," Gilbert said.

Then, Walker ran for president during the 2016 election. He at first seemed like a budding star, a front-runner. That is, until Donald Trump became a candidate.

Walker dropped out of the race in September 2015, "utterly eclipsed" by Trump, Gilbert said.

Although Walker’s policies in Wisconsin often pushed the envelope, and he was known for sparring openly with Democrats, he was also a "darling" of the Republican Party, Gilbert said. Compared to Trump, he was a conventional conservative. And voters wanted the outsider.

Priebus, as head of the Republican National Committee and then White House chief of staff, wasn’t an elected official. But his reputation also changed when held up to Trump’s.

"Oddly enough, because Trump was such an outsider, Reince Priebus was seen coming into the Trump presidency as like, the 'Washington insider,'" Gilbert said. "When really, he wasn’t even a Washington insider."

Priebus actually spent most of his career climbing the ranks of the party in Wisconsin, until becoming RNC chair in 2011.

Why did the three fall in the Trump era? It was largely both a mismatch in style and substance, Gilbert said. Trump was a departure from conservative orthodoxy. But he also, perhaps, had a different broader vision for the Republican Party than Ryan, Walker or Priebus.

For example, after Romney lost the presidential election in 2012, Priebus commissioned a post-mortem on his defeat. One of its conclusions was the Republican Party needed to do a better job reaching out to Latino voters, and needed to find a comprehensive solution for immigration reform.

"That was done before Donald Trump ended up taking the party really in the opposite direction," Gilbert said.

The jury is still out on Walker’s staying power. After Democratically backed Rebecca Dallett was elected to the Wisconsin Supreme Court in April, Walker warned of a Democratic "blue wave."

Gilbert points out that we don’t know who the Democratic gubernatorial nominee will be, or their chances of competing against Walker, nearing the end of his second four-year term.

But he says Walker has made moves to appeal to more moderate voters, distancing himself from Trump.

Come November, it will be up to voters to decide whether the "Cheesehead Revolution" has run its course, or if it's here to stay.