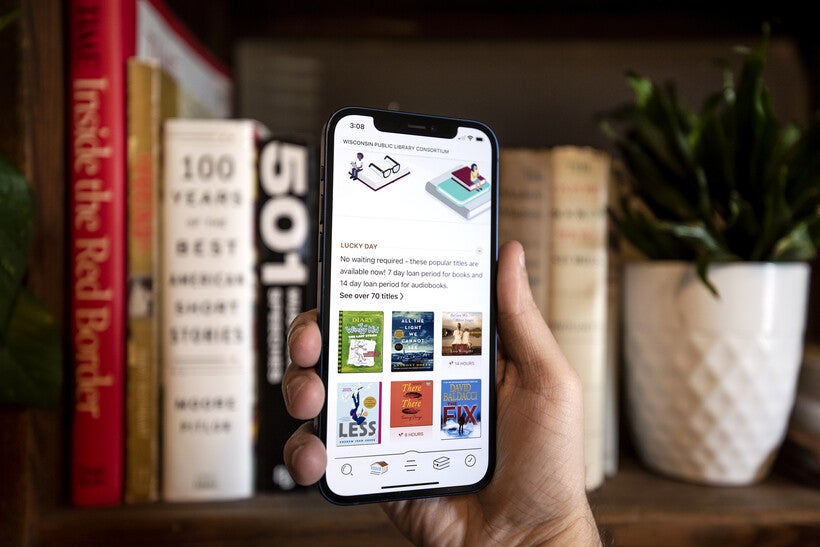 Wisconsin library cardholders have access to e-books, audiobooks and digital versions of magazines through the Wisconsin Library Consortium, and can access them through the Libby app. Angela Major/WPR

Libraries say the pandemic drove interest in digital collections, and patrons are sticking with them
By Madeline Fox
Share:

Wisconsin library patrons checked out 7.2 million e-books and audiobooks last year, an impressive feat for a state with just under 6 million people.

"It has just really blown up, really since the pandemic," said Melody Clark, project and consortia manager at the Wisconsin Library Services. "Between 2019 and 2021, the last two years, we saw an increase of 20 percent, which is huge for a library."

There was an especially large jump in new digital library users during the first months of the coronavirus pandemic, with 113 percent growth from February to April 2020.

Cathy Kolbeck, director of the Algoma Public Library, said her library has seen that growth firsthand. She credits it to a combination of more people looking for ways to access library resources without venturing out and risking COVID-19 exposure, and the library itself anticipating that demand and trying to make resources more accessible. For one, the library made it easier for patrons to register for a library card online, making the digital collections immediately available.

"Because of the pandemic, they couldn’t come into the library, so they went online, and now they’ve noticed they really like the digital format as well as the physical book," she said. "Just from talking to people, they really still like the physical books, but sometimes at night lying in bed it’s a lot easier, maybe, to read on your iPad or your phone, and then walking around your house, cleaning your house listening to the audiobooks, I hear that quite a bit as well."

Kolbeck takes that blended approach to library resources herself.

At any given time, she’s reading three books — one physical copy, one audiobook she streams while in the car or cleaning her house, and an e-book she keeps handy for bedtime or when she doesn’t have her paper book on her. A recent favorite of hers is "The Girls in the Stilt House," by Kelly Mustian, which she said is similar to the popular "Where the Crawdads Sing" by Delia Owens — Wisconsin’s third most-frequently borrowed audiobook in 2021.

Library users can access digital and audio titles through the Libby app, created by the digital library company Overdrive, which is available for smartphones and computers. In addition, some libraries provide access to Hoopla, which also includes music, movies and TV shows.

The Hudson Public Library leaned on digital resources to keep its patrons entertained during the pandemic, but also during an unexpected three-month closure after it was damaged by storms in September.

Library assistant director Madeline Page said they’ve even made other resources that people could previously only access on library computers — like Ancestry.com — available remotely.

But Page said the pandemic is just one factor driving the growing interest in digital books.

"A lot of new cars don’t have CD players," she said. "We saw another increase in popularity because people want to stream their audiobooks in their cars."

She noted e-books are more accessible to many patrons who may have trouble reading much of the library’s print collection.

"Most libraries have a relatively small large-print book collection," she said. "Every single book that’s available in digital format has the potential to be in large print, which is huge for us, and there’s also even a dyslexic font for any of those books you check out online."

Still, digital collections come with their own barriers, from the internet access and technological resources needed to download books to the cost of acquiring those books for libraries. Unlike e-books for personal use, library e-books range from $20 to $65 each and aren’t permanent additions like print collections. Libraries typically get a license for an e-book for either a set period of time or a set number of borrows.

"How that translates for libraries is that, if there is a very popular title, there may be a very long wait for patrons, because even though we do purchase in bulk, those prices do sort of drive how much we can buy," Page said. "That’s really hard when you’re impatient for a good book."

The Wisconsin Digital Library Consortium, the centralized digital resource collection that includes every library system in the state, averages 100,000 unique users each month. Clark, with the consortium, said Wisconsin’s digital circulation was the fourth-largest circulating Overdrive library in the world in 2020, and the seventh-largest in 2021.

Still, the state’s librarians note the brick-and-mortar aspect of a library is still crucial to local communities.

"We really see them both working in tandem," said Clark. "There is this need to support and put money toward the digital library, but there is also a great need for the physical — it’s the space, the internet, it’s the librarians themselves as a resource."

Kolbeck, in Algoma, said many of the patrons she sees on a daily basis aren’t just at the library for books.

"We had a student just last night who needed a quiet place to work on some assignments, so he brought his laptop, and because we had Wi-Fi, he just sat here for hours and worked," she said. "We’ve got a homeschooling family who comes in and checks out books that they can use for homeschooling — and we have hotspots, so they’re able to check out a hotspot and take that home and have Wi-Fi, which they can’t afford right now."

Below are the top titles in the state for 2021 and some of Wisconsin Public Radio's favorite reads of last year.

The Top 5 audiobooks were:

While reporting on the growing popularity of digital checkouts, WPR education reporter Madeline Fox got curious about the newsroom’s favorite library titles of the past year — hers was Danielle Evans’ short story collection "The Office of Historical Corrections."

Digital editor Andrea Anderson enjoyed "Long Bright River" by Liz Moore for herself, while "Chewy Louie" by Howie Schneider and "Change Sings" by Amanda Gorman were a hit with her daughter Magnolia, who got her first library card this year.

Digital editor Jenny Peek’s son Liam, also a newly minted library cardholder, loved "Truck Truck Goose" by Tammi Sauer and "Busy Busy Construction Site" by Richard Scarry so much that the family had to buy their own copies so they wouldn’t hog the library’s.

Newscaster Hannah Haynes couldn’t pick just one book out of the more than 40 she borrowed from the library in 2021 – Ann Patchett’s "The Dutch House," Patrick Radden Keefe’s "Empire of Pain," "Mexican Gothic" by Silvia Moreno-Garcia, "Klara and the Sun" by Kazuo Ishiguro and "The Fifth Season" by N.K. Jemisin all made the list.

Wausau-based rural communities reporter Rob Mentzer loved "Remote Control" by Nnedi Okorafor — though he also relied on the library for books to help him develop a new hobby, woodworking.

News editor Deneen Smith favored lighter audiobooks for her daily walks, to counterbalance a heavy news cycle. She used the Libby app to listen to titles by Anthony Horowitz and Sophie Kinsella.