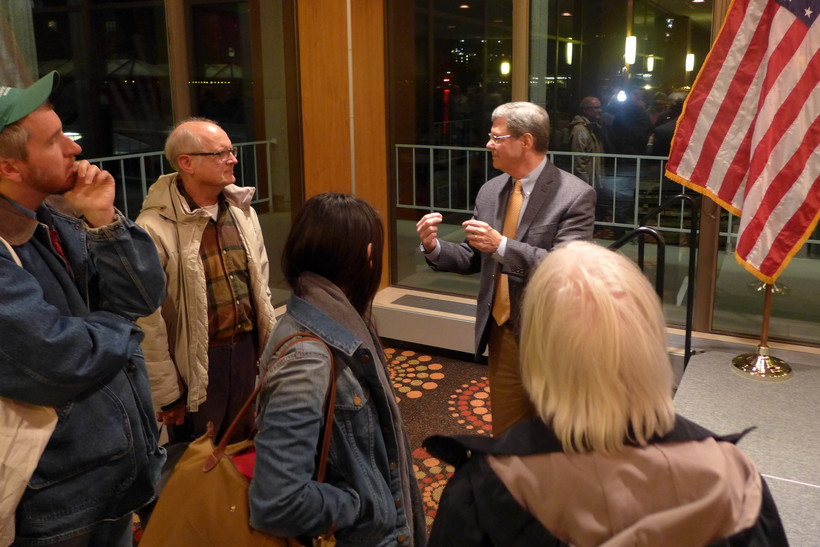 Conservative talk radio host Charlie Sykes told a crowd on the University of Wisconsin-Madison campus Tuesday it is impossible to talk about President-elect Donald Trump without discussing the "racism and xenophobia" that has been normalized by his campaign, calling them a "cancer" the Republican Party will have to confront.

Sykes singled out Breitbart News Chairman Steve Bannon, who helped run Trump's campaign and who was tapped by Trump to be his chief strategist in the White House.

"I don't know whether Steve Bannon in his heart is an anti-Semite or a racist, but I do know that he's opened the door, he's normalized them, and he's enabled them," Sykes said. "And that will have real consequences."

Sykes said Republicans' victories put them in a complicated situation where despite any misgivings they might have about Trump, their control of the presidency, the House and the Senate will let them accomplish many of their legislative goals.

"I will be honest with you that there are a lot of things that will happen that I think I will like, that I think will be positive," said Sykes, whose programs on WTMJ Radio and WTMJ TV in Milwaukee have helped him shape Wisconsin's conservative agenda for decades.

But Sykes said repeatedly at Tuesday's post-election forum that aspects of the 2016 campaign cycle shocked him, including Trump's call for a ban on Muslims entering the United States.

"What troubled me about this campaign – and I know the way this actually sounds – that here you have the strong man who comes in and says, 'I alone can fix things, I am the man on the white horse, and all of your problems have to do with these foreigners and these brown people.'  And that resonated with people," Sykes said.

Weigel said one of the differences in 2016 compared to previous presidential campaigns was the emergence of the Black Lives Matter movement and protests against police. He said many in law enforcement had in turn been vocal Trump supporters.

"That is an extremely dangerous road to walk down," Weigel said. "To have part of the country feel that police are discriminating against them, the police themselves rooting for somebody who doesn't take that seriously and for then one group of voters to root for the people who don't take that seriously."

Cramer said the disrespect shown to President Barack Obama, the nation's first African-American president, set the stage for the 2016 campaigns.

"It seems to me that the racism in this campaign, obviously, has been many years coming," Cramer said. "We just as a country have never dealt with our racist past."

Cramer, who has met for years with groups of rural Wisconsin residents to learn about what shapes their political beliefs, said she understood many in the Madison audience did not want to listen to Trump supporters.

"And I still find myself saying to people, I do think the way forward is to carefully listen to the people with whom you disagree," Cramer said.

Sykes said he has been struck by the way social media let voters ignore people or news that doesn't match their world views. For example, Sykes said he used his radio show to highlight Washington Post reporting that exposed questionable practices by Trump's charity. Sykes said the reporting deserved a Pulitzer Prize.

"And I realized that no one in my audience had heard this or seen this," Sykes said.

Weigel said he viewed the election as an "existential challenge" to journalism.

"What we wrote did not matter in terms of the information people thought was relevant on Election Day," Weigel said.

Sykes said part of the reason many voters dismissed suggestions Trump's campaign was racist or sexist is because Democrats have used the terms to describe so many Republicans over the years and the words lost meaning.