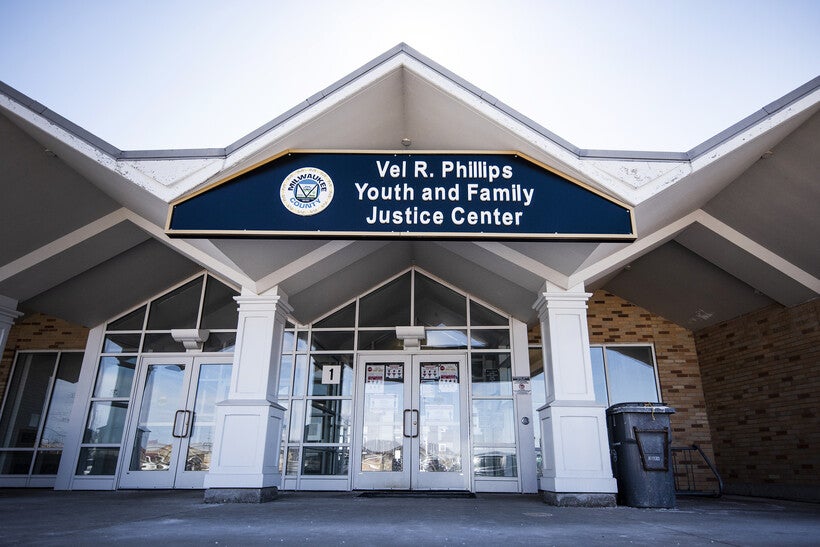 A sign hangs above the front doors of the Vel R. Phillips Juvenile Justice Center on Friday, March 5, 2021, in Milwaukee, Wis. Angela Major/WPR

Charged with homicide for the shooting death of his mother, a 10-year-old is being tried as an adult. Some legal experts say that's too young.

The Milwaukee boy allegedly killed his mother in November following an argument
By Evan Casey
Share:

As a 10-year-old Milwaukee boy accused of killing his mother makes his way through the court system, some legal experts and activists worry the boy is far too young to be tried as an adult — raising questions about how Wisconsin law handles juvenile offenders.

Milwaukee police say the boy shot and killed his mother on the morning of Nov. 21, following an argument they had the night before. But family say the boy has dealt with mental issues for years, even leading his mother to place cameras throughout the home to monitor him, according to a criminal complaint.

The boy is now facing a first-degree reckless homicide charge and a harsher first-degree intentional homicide charge, which carries a sentence of life imprisonment. In Wisconsin, children as young as 10 are automatically charged as adults for some crimes, including homicide.

His young age was apparent in court this week; when asked about the possibility he could post bond, the child told his lawyer he might be able to look through couch cushions in search of loose change. His defense attorney had asked the judge in the case to lower the bond to $100, but the judge refused the request. The boy is being held in a juvenile detention facility pending $50,000 bond.

Ultimately, a judge may move the boy's case into the juvenile court system through a reverse waiver process. But for now, he will face the same expectations in the courtroom — and in criminal culpability — as any grownup with the same charges.

Sharlen Moore, the director of Youth Justice Milwaukee, said she was shocked by the incident.

"I was shocked, especially knowing that this young person had mental issues … but even regardless of that, we should never be trying children as adults," Moore said.

Moore is now calling on the state to take a closer look at the law that allows the boy to be tried as an adult.

"I think a lot of times we look at the incidents that occur and not look at the fact that they're still children," she said.

The Wisconsin Alliance for Youth Justice, or WayJ, echoed that sentiment.

“WayJ believes that a 10-year-old should never be treated as an adult," the group said in formal statement. "Ten-year-olds are still learning their feelings, how to sort them and they need support to do that."

Ion Meyn, an assistant professor of law at the University of Wisconsin-Madison, believes 10 is too young to face criminal culpability in the same way as an adult.

"The science is finding that in many respects, it's irresponsible to decide that a child should be incarcerated for conduct," Meyn said.

Jyoti Nanda is a law professor at Golden Gate University in San Francisco. She studies juvenile justice across the nation and world.

"If they (Wisconsin) were to end up trying the child as an adult, as a 10-year-old adult, it would really be out of step with the way the world thinks about culpability… not even just the country, but the world," Nanda said.

"Their (children's) ability to develop intent is different, their ability to make decision-making is different than it is for adults, because we know that about their brain development," Nanda said.

The National Juvenile Justice Network found that 24 states in the U.S. have no minimum age for prosecuting children. Other states have different minimums, ranging from 8 to 13 years of age.

"This is an opportunity for us to reexamine our laws and also just the inconsistency that we have with this patchwork across the country," Nanda said.

The National Juvenile Justice Network found that internationally, 14 is the most common minimum age of criminal responsibility.

"It is shocking to the conscience that there are still states in this country that have not set a bare minimum age at which you can try a child in juvenile court," an article from the group said.

A report from the National Conference of State Legislatures also found that Wisconsin is one of only three states where the maximum age of juvenile court jurisdiction is 16, meaning 17-year-olds are always charged as adults in criminal cases in the state.

The boy is accused of killing his mother on the morning of Monday, Nov. 21 in the basement of their home.

He originally told police he accidentally shot her at a close range after he was twirling the gun on his finger. But during another interview with detectives, he said that was not true and that he had gotten the gun because he was mad at his mother for not allowing him to get a virtual reality headset on Amazon.

The complaint said the boy retrieved his mother's keys to the lockbox for the gun the night before he shot her. He then went into the basement in the morning, and took a "shooting stance." Before he fired the gun, he held it with both hands and then closed his left eye, according to the complaint.

"His mother walked in front of him when he tried to shoot the wall to 'scare her,' whereupon he admitted that he shot her in the face when she was approximately three feet away from her," the complaint said.

The boy told police his mother was walking toward him, telling him to put the weapon down.

He told police, "I didn’t listen to her."

The complaint added that the boy was also mad that his mother had woken him up earlier than he normally gets up in the morning.

After he shot her, he told police, a cousin told him he could go to prison, so he "just tried to come up with different stories."

On the morning of the incident, he also bought the virtual reality headset on Amazon, using his deceased mother's credit card.

A day after the incident, the family of the mother contacted police, telling them that the boy has had a long history of troubling behavior. The boy's sister told police he's had "rage issues" his entire life.

In one instance, he filled a balloon with flammable liquid and set it on fire, setting a couch on fire with it.The boy's aunt said he had harmed a puppy the family used to own when he was just 4, causing his mother to get rid of the dog.

The family told police he was seeing a therapist regularly and that the school he attended was sending daily behavioral updates to his mother, explaining if the boy disrupted class that day.

His mother had also set up cameras inside the home to monitor his behavior.

When he was interviewed by police, the 10-year-old told police he had five different "imaginary people" that talk to him every day.

Detectives said the boy showed no remorse and did not cry following his mother's death.

The boy, who is not being identified because of his age, could be moved to juvenile court if a reverse waiver is approved by the judge.

But in order for that to happen, state law says the court must find that:

Meyn, the assistant professor of law at the UW-Madison, doesn't believe the third criteria is appropriate for children.

"The fact that legislators actually put that down on paper is shocking to me," Meyn said.

The boy will appear in court next for a preliminary hearing on Jan. 14.