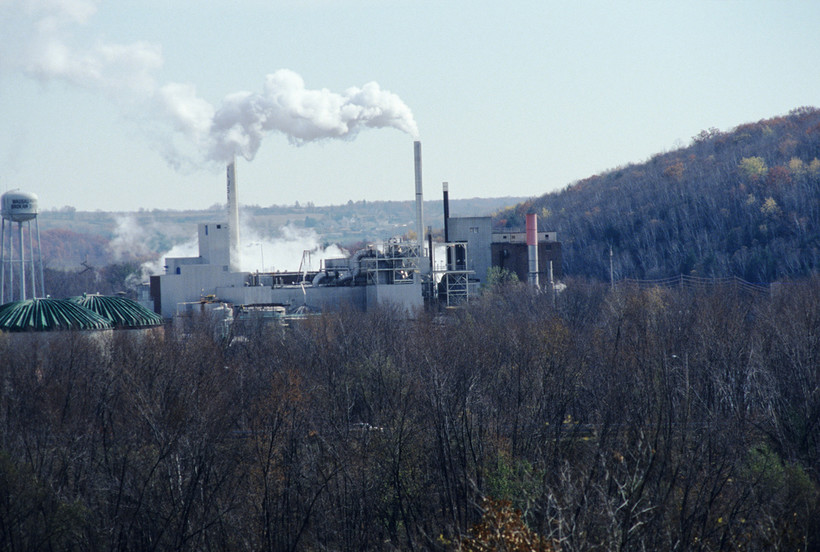 Above, the Brokaw paper mill one year before its closure in 2012. Photo: Wisconsin DNR (CC-BY-NC-ND).

Brokaw Is $4.5M In Debt After Losing Its Primary Source Of Revenue
By Glen Moberg
Share:

The small central Wisconsin village of Brokaw is asking Marathon County and two surrounding town governments for help in solving a financial crisis brought on by the shutdown of a local paper mill.

When Wausau Paper closed its Brokaw mill in 2012, the village lost its biggest source of tax revenue, leaving its 250 people saddled with $4.5 million in debt and few ways to pay for it.

“When major sources of tax revenue are no longer there, the burden then falls to the residential property owners, and that's very difficult for them,” said Attorney Dean Dietrich, who represents the village.

Brokaw has few good options. Annexation to the bigger, nearby city of Wausau is problematic, because the two communities aren't contiguous and they are both incorporated.

As for bankruptcy, Dietrich said the law in Wisconsin doesn't allow for it.

“State law in Wisconsin does not authorize a municipality to declare bankruptcy,” said Dietrich. “Each state has its own laws that affect this – so that's why Detroit could do it, because Michigan would allow that.”

It is possible for Brokaw to dissolve, which would leave Marathon County and two surrounding towns, Maine and Texas, dealing with the debt. Dietrich says village leaders are asking the county to bring together all the parties, and come up with options before it's too late.

The county's Education and Economic Development Committee will take up the request on June 23.