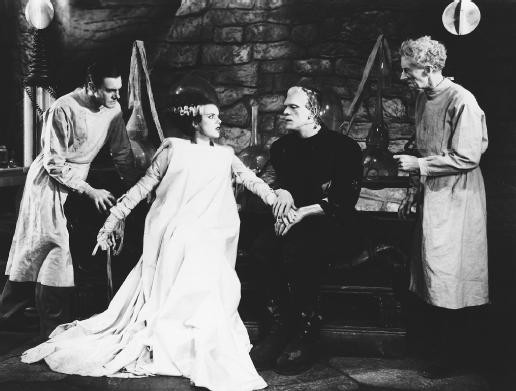 Screenshot from 1935 "Bride of Frankenstein"

National Frankenstein Friday is this Friday, Oct. 27, and this year is an especially momentous occasion because it’s the 200th anniversary of the creation of Mary Shelley’s "Frankenstein: Or, The Modern Prometheus" (it was published on New Year’s Day 1818).

Shelley’s novel about Victor Frankenstein and a creation run amok grappled with technology and both our desire for it and the fear that it inspires. Almost as soon as it was created, the story and its characters permeated popular culture, despite poor initial sales and unfavorable reviews. The Quarterly Review, for instance, declared that the story "will not even amuse its readers, unless their taste have been deplorably vitiated."

The book has been spun into hundreds of plays, movies, television shows, and books. The first play adaptation appeared in 1823, and it was adapted for film in 1910 by the Thomas Edison Company. Milwaukee’s own Gene Wilder co-wrote and starred in the 1974 adaption "Young Frankenstein," a black-and-white tribute to the famous Boris Karloff version of the story that aimed for humor rather than horror.

Frankenstein along with the "franken-" prefix also became a warning. In a commencement speech at the Oshkosh State Teachers College as reported in the Oshkosh Daily Northwestern in 1935, Dr. Francis Blair warned graduates that the inability to socialize with others creates Frankensteins in society. "Schools are laboratories where human beings are prepared for life," declared Blair. He encouraged the future teachers to think of themselves of as shapers of the students much as Dr. Frankenstein was for his creation: "Peering in the window, the Frankenstein monster said to his maker: 'Here I am. You created me. Now how me how to live a happy life.'"

Just a few years later, in 1940, a minister in Neenah warned that the spread of communism would make Frankenstein monsters of the masses. That monster would be characterized by a growing list of wants coupled with a lack of gratitude, fear of free discussion, and use of force, reported the Appleton Post Crescent.

Wisconsin isn't without its own Frankenstein-like monsters. The Mauston Birdman, for instance, is said to combine the features of a man and bird into a giant creature.