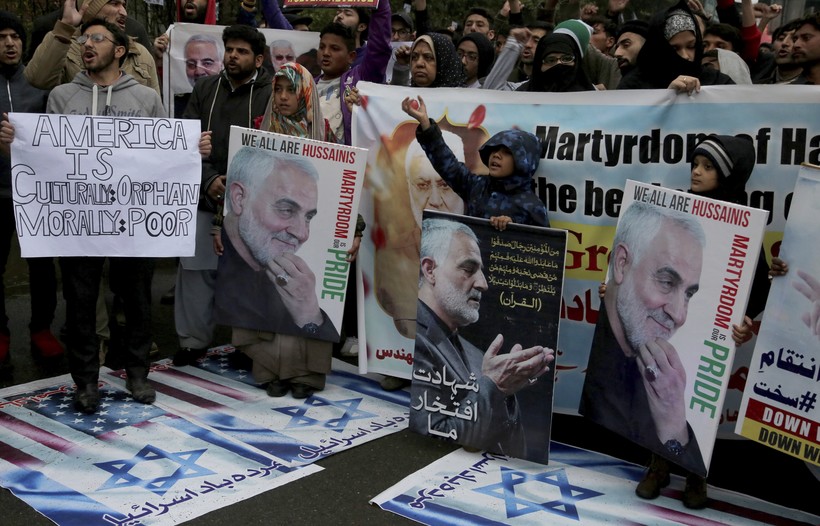 Pakistani Shiite Muslims stand on representations of Israeli and U.S. flags while shouting slogans during a rally in protest of the recent U.S. attack in Iraq that killed Iranian Gen. Qassem Soleimani, outside the U.S. Consulate in Lahore, Pakistan, Tuesday, Jan. 7, 2020. K.M. Chaudary/AP Photo

In The Case Of Iran, Who Decides What Constitutes 'War'?

As the tense situation between Iran and the United States continues, many are asking what the political ramifications will be. Some are even asking why the escalation is happening in the first place. But there's also the question of how the president of the United States can make the decision to kill someone like Iranian Maj. Gen. Qassem Soleimani. Is it an act he, and he alone, can make? Does the U.S. commander in chief need anyone’s approval? And under what legal authority can it be done?

Speaking to Anne Strainchamps for "To the Best of Our Knowledge," Scott Anderson, fellow at the Brookings Institution, said that his time with the U.S. Department of State as the legal advisor for the U.S. Embassy in Baghdad taught him one very important thing: it's complicated. For example, did the U.S. "kill" Soleimani or did the U.S. "assassinate" him?

This transcript has been slightly edited for clarity.

Scott Anderson: We've seen the executive branch make gradually broader and broader assertions of authority to use military force, not necessarily in ways that are clearly prohibited by the text, but in ways that many people find stretch their meaning or least push into new terrain.

Anne Strainchamps: I'm just thinking back in the 1970s and 1980s, it seems like it would have been unheard of for a president to sanction the targeted killing of an individual in another country. Didn't Gerald Ford actually adopt a presidential ban on assassinations?

SA: He did, after the Church Committee hearings regarding reforms in the intelligence community. That ban is still on the books; it's currently part of Executive Order 12333, which was adopted by President Reagan, but has been kind of kept in place subsequently and just amended and tweaked.

AS: If the ban is still in place, doesn't that specifically prohibit the action President Trump just took?

AS: Doesn't it just mean killing somebody?

SA: No, because presumably there are less specific terms that would mean killing someone, like "killing" someone, right? "Assassination" seems to imply a more technical context or meaning.

AS: Okay. Legally, what is an assassination?

SA: Well, we don't know exactly, for the reason that a lot of the executive branch's interpretations of how that ban has been applied and implemented are not publicly available.

What we do understand from media reporting and from snippets of at least one Office of Legal Council (OLC) opinion from the Obama era — that is the Al-Awlaki OLC opinion — we understand that acts that are seen as lawful acts of self-defense under international law, presumably where the president is acting to defend the country, those at least do not constitute assassinations because they are lawful acts.

Unlawful acts, unlawful murders — if (a strike) were to kill a foreign leader who in no way presented a threat, for example — those would pose a harder question, at least under the assassination test. Although, again — we don't know exactly what the full scope of how it's been interpreted.

AS: Are you telling me there is a legal definition of assassination, but it's private? It's secret?

SA: There is a set of precedents and views adopted by the executive branch probably around that prohibition — at least we've been led to believe that there are — and they're not publicly available. It probably doesn't boil down to something like a concrete definition, but it's a set of precedents about how that standard has been applied.

AS: How can it be legal that the public can't know? How can you have a president say, "I can do something legally, but I'm not going to tell you why and you can't can't know why it's legal"?

SA: In the (case of the) assassination ban specifically, that is not a law. That's a presidential policy, through an executive order. And so really, in any context, the president can come in and say, "I'm changing this policy, I'm tweaking it, I'm adjusting it, I'm adopting contrary guidance." And so that one they have particular leeway interpreting and applying.

But there are certainly steps Congress and other institutions can take to make that information more publicly available.

AS: So during the Obama administration, of course, there were dozens of these drone strikes on individuals. I guess I'm wondering: is there a legal difference between killing the top general in Iran and killing an ISIS terrorist in Syria?

SA: That's a good question. You know, I think a lot of it boils down to these ideas of imminence. The ideas of whether it's a necessary and proportional action to address a threat against the United States and where that threat comes from.

It's supposed to be a little bit more constrained; the idea is to not create a cycle of escalation, (but) instead to act in a way that's, again, proportional and necessary in relation to the threat against you.

And that is what's drawn in question here in substantial part by the Soleimani strike. Is this necessary and proportional? Is this something that we can justify on this usual scale, as opposed to other scales, to much larger scale armed conflict that even the United States doesn't maintain that we're in with Iran at this point? And that's part of the reason, again, it's proven so controversial.

AS: So you've described a situation in which recent Presidents Bush, Obama and now Trump have increasingly pushed the envelope on the executive branch's legal authority to use military force. At this point, us reading between the lines, it kind of seems like the executive branch doesn't actually have much of a check on its ability to start a war.

SA: I would not go quite that far.

AS: How far would you go?

SA: I think the president has really broad discretion in interpreting his own constitutional and statutory authority to use military force. And until Congress steps in and starts imposing clear limits, and/or the federal courts step up and start being more willing to take on these legal questions, that's likely to remain the case.

SA: There are definitions of all those concepts in different contexts. So honestly, the idea of just thinking about war as a binary state doesn't work — certainly in the post-9/11 era — and really hasn't worked through a good part of the 20th century because (of) the way we think about national security threats. Whereas they were once very much condensed to concrete threats that can be addressed through a state of war against another country, now they're much more desegregated, and they're much more sustained.

The approach has been to kind of begin mingling peacetime and wartime together by providing more diversified bundles of legal authorities.

AS: Wow. That's just kind of a dark vision of the future, in which peacetime and wartime are just all mingled up together.

SA: Personally, I think I would be much more uncomfortable with the idea that wherever we face these national security threats, we either have to go all in or not, through a fully declared state of war. I'm OK with the idea that we can strike more complicated approaches and complicated policy responses without that strict binary.

But it does rely upon careful consideration, a Congress that is willing to think ahead, and frankly, a president who's responsible enough to exercise the authorities given to him in a wise manner. And where you lack those things, it can be a dangerous circumstance.