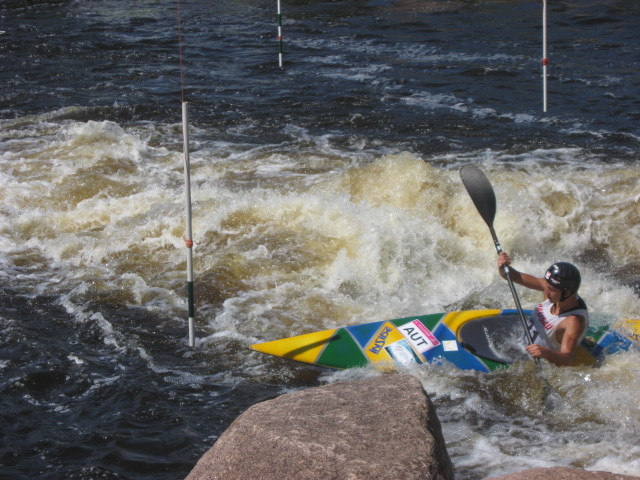 Wausau is hosting the International Canoe Federation's Junior Slalom World Championships this week.  The hundreds of international athletes include at least two members of the U.S. Olympic team.

Three-hundred young athletes from 27 countries are competing in what's being called the biggest whitewater event next to the Olympics.  A big draw is the downtown Wausau course, according to Joe Jacobi, USA Canoe/Kayak Executive Director and a 1992 Olympic Gold Winner. “In a day and age when you're building a lot of these manmade, concrete channels, this is a river!" he says. "This is a real river with real rocks and it feels more like the essence of the sport."

The sentiment is echoed by Casey Eichfeld, a member of the 2008 U.S. Olympic team who will be competing again at the 2012 games in London. "And it's nice for us to get to race on a natural riverbed," he says.  "We're so accustomed these days to just concrete ditches that have been built for us, it's nice to get back to kind of our natural element again."

Eichfeld is from Pennsylvania.  Another 2012 Olympian, Caroline Queen, hails from Maryland, but calls Wausau her second home. "We've raced in Wausau a couple of times over the past couple of years, and it's my home away from home," she says.  "There's no better people than Midwesterners, and I think that it's great for a lot of these countries to see this part of America."

Joe Jacobi says the presence of the two Olympians will help draw a big crowd. "Here we have two U.S. Olympians that are going to be competing in London and people can come and see them this weekend here in Wausau," he says.

The slalom competition isn't the only local attraction this weekend.  There's also a girls softball tournament, a rib fest, a balloon glow, a chalk art festival and a jazz festival, so hotel rooms are filling up fast.