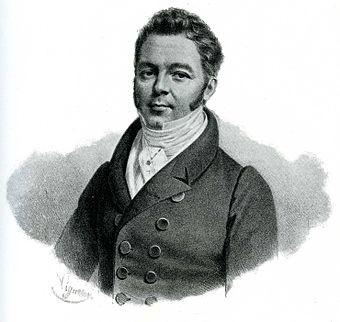 Composer Georges Onslow was a master of the string quintet, and he applied that mastery to one of the most remarkable string quintets ever written–a description of an accident that nearly took his life.

Onslow was born in France in 1784 to a father banished from England because of a homosexual scandal. Onslow spent much of his youth in London receiving the education of a gentleman, and became a capable cellist. After two years of travel in Germany and Austria he began composing, specializing in string quintets for two violins, viola, and two cellos.

The quintet that most fascinated his contemporaries describes an accident that nearly ended Onslow’s composing and his life.

In 1829 Onslow and some companions were hunting a long-elusive wild boar, but–ever the composer–Onslow brought along a book of music paper just in case inspiration came during the hunt.  Book in hand, he took up an assigned position and waited for his fellow hunters to drive the boar his way. After a while, the quiet woods roused Onslow’s musical imagination and, forgetting his friends, he wandered deeper into the woods, found a stump, and sat down to work on his latest quintet.

A shot rang out and Onslow fell bleeding to the ground.

A bullet had cut through his ear and lodged in his neck. His recovery was slow, painful, and partial. He roused himself by continuing his work on the quintet that had distracted him in the woods, only now it became a recollection of the accident. To the second movement minuet he gave the title “Suffering, Fever, and Delirium.” The next movement he called “Convalescence.” And the finale became known as “Recovery.”

The bullet in his neck was never removed and he eventually went deaf in the affected ear, but despite the high cost of his “Bullet Quintet,” Georges Onslow said often that he would not have wanted to miss the opportunity to write it.