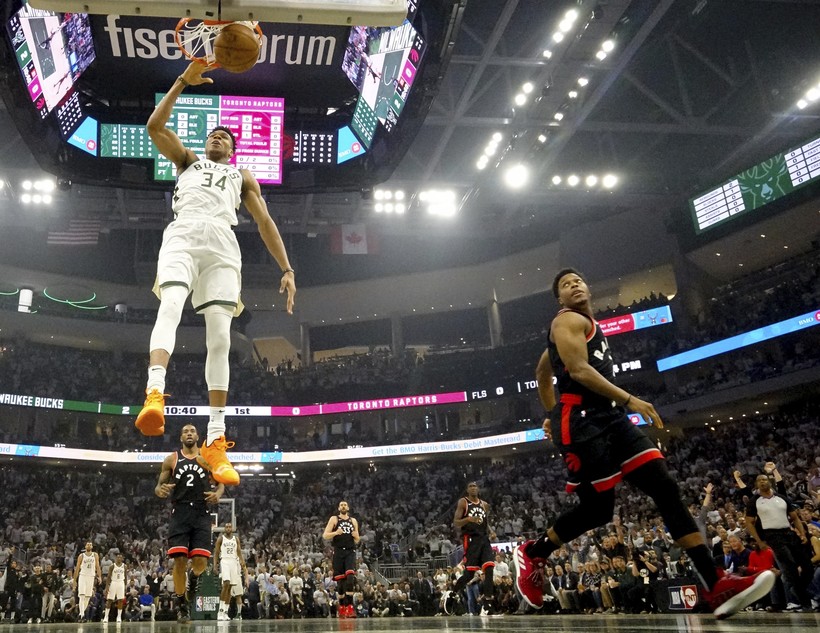 Milwaukee Bucks' Giannis Antetokounmpo dunks during the first half of Game 1 of the NBA Eastern Conference basketball playoff finals against the Toronto Raptors on May 15, 2019, in Milwaukee. Morry Gash/AP Photo

First Time In 18 Years Milwaukee Team Has Made It This Far In Post-Season
By Corrinne Hess
Share:

The Milwaukee Bucks came back in the fourth quarter to beat the Toronto Raptors 108-100 Wednesday in the first game of the NBA Eastern Conference Finals.

With only two minutes left in the game, Brook Lopez made a three-point shot. The sell-out crowd was on their feet for the rest of the game.

Post-season glory has remained elusive for the Bucks. The team hasn't advanced to the league finals since 1974 and hasn't won the NBA title since 1971. After Wednesday night's game, Milwaukee fans will likely continue to celebrate as this is the first time the Bucks have made it past the opening round of the NBA playoffs since 2001.

Jim Kogutkiewicz was a student at the University of Wisconsin-Milwaukee in 2001 when the Bucks made their last appearance in the Eastern Conference Finals.

"I was able to buy the cheapest (seat) possible for every possible playoff game," Kogutkiewicz said. "I think the entire package was less than $150."

Kogutkiewicz, of Shorewood, is still a diehard Bucks fan. He has been able to see this season's playoff games as a season ticket holder.

"A few months ago, a friend told me these are the halcyon days," Kogutkiewicz said. "No matter what happens from here, no matter how great Giannis (Antetokounmpo) becomes, there will be nothing like this particular year. And he was right. I'm just trying to savor every minute."

Michael Tarantino, 21, and his father, Jim, have stuck with the Bucks for many years — even the rough ones.

"This is amazing to see how far they've come from 2015 when they only won 15 games," Michael said. "The coach just really took us to the next level."

Julie Sadoff, of Mequon, has had season tickets for years. She said she thinks the run is well deserved for the city and herself.

"My husband drags me to everything," she said. "This is my payoff for sitting through all those bad games."

Dorothy Ewing has worked at the Fiserv Forum since before it opened last year. She worked at the Bradley Center for two years before that. Ewing said she loves the Bucks and she has loved this recent string of wins.

Before Wednesday's game, Warren Brockman, of Pewaukee, was confident the Bucks could clinch the series in four games.

"It's not going to go that far, we're talking four games and it's done," Brockman said. "These people (Toronto Raptors) are not even from the United States."

Bucks President Peter Feigin was also confident before the game. Feigin said one of the best parts of getting this far was what it does for the city of Milwaukee and the fans, some of whom have never seen the Bucks make it past the opening round of the NBA playoffs.

Feigin wouldn't predict how many games it would take the Bucks to win the conference finals, but he's confident the team will do it.

"We're going to the championship," he said

Game 2 of the seven-game series will be played at 7:30 p.m. Friday in Milwaukee. The Bucks head to Toronto on Sunday to continue the series.