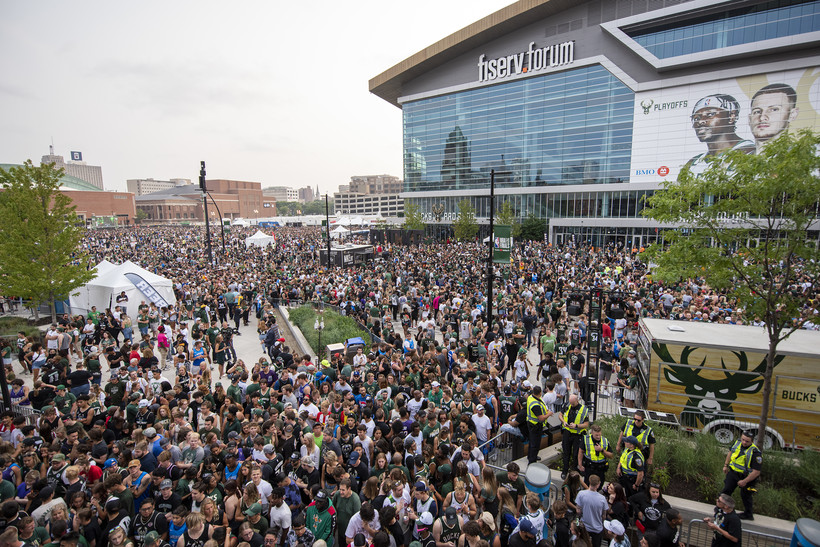 Fans fill the Deer District outside the Fiserv Forum where the Bucks would play game six against the Phoenix Suns with a chance to win the NBA Championship on Tuesday, July 20, 2021, in Milwaukee, Wis. Angela Major/WPR

The ad features Nelson on an empty basketball court wearing a Bucks jersey. He starts off by stating he supports the team, but, "What I'm not rooting for is using your tax dollars to make billionaires richer."

"We paid a quarter of a billion dollars for the Fiserv Forum, even more than Foxconn. Every dollar spent was taken from schools, roads, tax relief — things that benefit all of us," Nelson said.

Nelson is referring to a controversial but bipartisan law passed in 2015 and signed by former Gov. Scott Walker that initially directed $250 million in state and local taxpayer funding toward the $500 million Bucks arena. The other half of the funding was split between team owners, including Democratic U.S. Senate candidate Alex Lasry's father, Marc Lasry, as well as former U.S. Sen. Herb Kohl , who's also a former Bucks co-owner.

"Go, Bucks," Nelson says in the ad. "But let's end these crooked political deals, because the only team that matters is you."

In a phone interview with WPR, Nelson said the Bucks have been very successful, as have the owners who bought the team in 2014 for $550 million. According to Forbes Magazine, the team is now valued at $1.9 billion.

"So, good on them," said Nelson. "But you know what? We want our investment back, plus interest."

Game 4 of the Buck's conference finals with the Boston Celtics will take place in Milwaukee's Fiserv Forum at 6:30 p.m. Monday. Milwaukee leads the series 2-1.

In response to a Wisconsin Public Radio request for comment, Lasry's campaign sent a statement from Dan Bukiewicz, president of the Milwaukee Building and Construction Trades Council, on behalf of Lasry.

"I’m not sure how a candidate for U.S. Senate can claim to be 'pro-worker' while being against the creation of thousands of good paying union jobs that built and support the Fiserv Forum," Bukiewicz said. "Tom Nelson’s insinuation that the public funding for Fiserv Forum was a waste of taxpayer dollars is troubling."

A spokesperson for Mandela Barnes' campaign said he would not be commenting on the ad.

An email sent to WPR by Wisconsin State Treasurer and Democratic Senate candidate Sarah Godlewski's campaign didn't respond directly to a question about state support going to arenas owned by wealthy individuals. The statement said Godlewski would fight for accountability and transparency in Wisconsin tax dollars if elected.

The 2015 bill that resulted in hundreds of millions in taxpayer support for the sports franchise came amid concerns that the NBA and the team's owners would relocate the Bucks to another city. Former Gov. Walker initially included the money in his 2015-17 state budget, which also proposed cutting $300 million from the University of Wisconsin System.

While it generated bipartisan support, the prospect of spending taxpayer money on a team owned by billionaires also created bipartisan opposition. Americans for Prosperity, which supported Walker, said the 2015 deal was "fuzzy on math, complicated accounting and millions of taxpayer dollars" and called for its rejection by lawmakers.

Some Milwaukee Democrats in the Wisconsin Legislature applauded the deal as an important investment in the city. Barnes, then a Democrat in the State Assembly, voted in support of the government subsidy.

State Sen. Tim Carpenter, D-Milwaukee, voted against the deal, telling WPR at the time that he predicted it would prompt a backlash from voters. State Sen. Steve Nass, R-Whitewater, accused the NBA of blackmail when the potential of moving the team without a new arena came up.

A poll released by the Marquette University Law School in April 2015 asked likely voters whether they supported lawmakers borrowing $150 million to support a new Bucks arena. Nearly 80 percent of respondents opposed the idea.

After the Bucks won the NBA Championship in 2021, the controversy surrounding the public financing deal seemed like a distant memory. VISIT Milwaukee estimated that the team's playoff run had a $57.6 million impact on the city and surrounding areas including lodging and transportation along with food and beverage sales.

Whether Nelson's reminder of the state and local taxpayer subsidies will impact the Democratic primary to unseat current Sen. Ron Johnson remains to be seen.