It took an extra five minutes Saturday, but it was well worth it. The Milwaukee Bucks are going to the NBA's Eastern Conference finals after an overtime victory over the Brooklyn Nets.

The Bucks beat the Nets 115-111 to win Game 7 of their Eastern Conference semifinal series. They'll face the Atlanta Hawks or Philadelphia 76ers in the conference finals.

Each team saw excellent play from their superstars. Reigning MVP Giannis Antetokounmpo finished the game with 40 points and 13 rebounds for the Bucks. Meanwhile, Kevin Durant had 48 points for the Nets.

Game 7 was held in Brooklyn, where the Bucks had yet to win a game this series. The first quarter was tight, with the Nets' offense looking cohesive — even going on an 11-0 run. But they never pulled away.

Antetokounmpo didn't shoot any 3-pointers in Game 6 but sunk one early Saturday. Later in the quarter, he drew a technical foul, and made the free throw, despite struggling from behind the line this series. He and Durant finished the quarter with 10 points each.

In the first half, Milwaukee shot below 40 percent from the field, with Khris Middleton and Jrue Holiday both going 2-11.

Meanwhile, the Nets played aggressive defense early and led by as many as 10 in the second quarter. But Pat Connaughton and Brook Lopez answered from behind the arc, keeping the Bucks within striking distance. Lopez — the all-time leading scorer for his previous team, the Nets — had 19 points on Saturday, not to mention a clutch block that helped Milwaukee win the game.

“He just did a little bit of everything. He’s a big part of who we are. The guys trust him, they know he’s there. He’s incredible at protecting the paint and taking that away. You’ve got to live away from the basket in a lot of games where Brook is playing," head coach Mike Budenholzer said.

The Nets took a lead into halftime, but a bright spot for the Bucks was offensive rebounds. Early in the third quarter, Antetokounmpo scooped up a missed jumper from Middleton, dishing it to P.J. Tucker for a corner 3-pointer. The teams traded the lead from there. 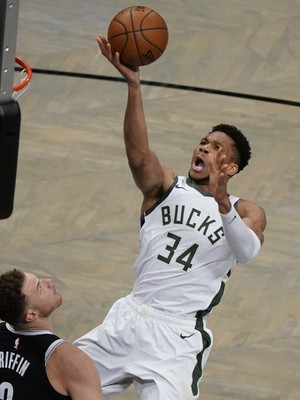 In Game 6, Antetokounmpo was dominant in the paint. But on Saturday, the Nets did all that they could to get in his way. He took 14 free throws, making eight of them.

It seemed Nets star James Harden felt a bit more like himself in Game 7. He suffered a hamstring injury in Game 1 and missed the next two contests. On Saturday, he made a difference by drawing fouls and shooting 3-pointers, making one with just minutes left to give Brooklyn a 5-point lead.

"They made a couple plays where you would think they were going to win the game, but we stuck with it," Middleton said. "We were down the majority of the game, we were down late in the fourth quarter, but we stayed with it and stayed resilient."

On Milwaukee's next possession, Middleton returned the favor, narrowing Brooklyn's lead to 2 points. After Brooklyn failed to score, Antetokounmpo drove to the basket and drew a foul. He missed the free throw, but the Bucks rebounded, and Holiday made a 3-pointer to give Milwaukee a lead.

It was Durant who would ultimately tie the game with a jumper with just one second remaining.

There wasn't much offense in the 5-minute overtime period. Bruce Brown made a shot for the Nets, and the Bucks got on the board minutes later, with Antetokounmpo tying the game. Lopez blocked a shot from Durant on Brooklyn's ensuing possession, and Middleton hit a jumper to give the Bucks a lead with just 40 seconds remaining. For all his success this series, Durant missed the shot to tie the game again.

The Bucks were underdogs going into this series, though injuries prevented the Nets from getting all their stars on the court at once. Kyrie Irving didn't play in Game 7 on Saturday.