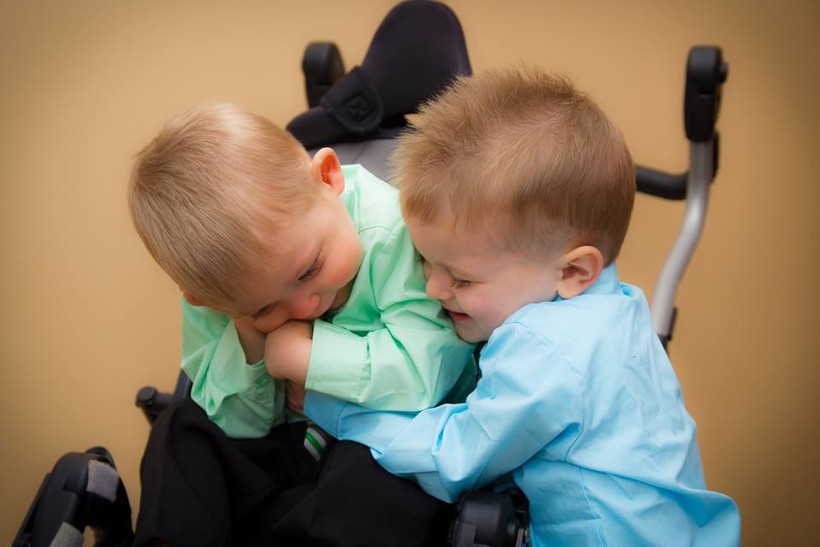 Born Of Grief, JoJo's Jungle Playground Will Be A Place For All Children

His parents have a video of Josiah Hoerter in the hospital about a month after his second birthday. He's wearing colorful pajamas and he’s got an IV in his arm. He's bouncing up and down on his knees and laughing.

Even when he was very sick, Josiah found ways to have fun.

"That's the Josiah we want everyone to remember," said his mother, Destiny Hoerter. "And that's the inspiration for our park, and what we want to give to everyone else." 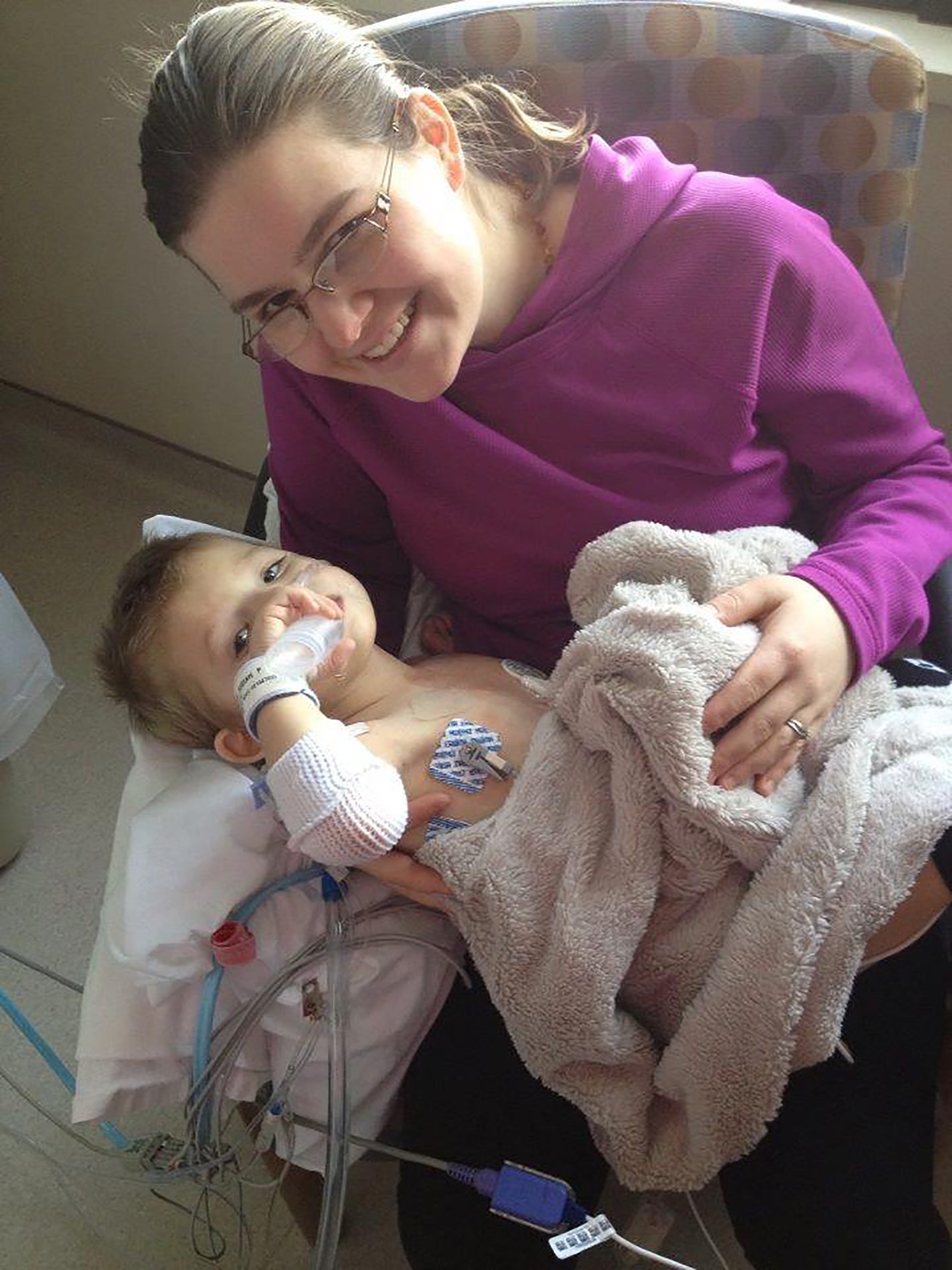 Destiny Hoerter holds Josiah in this 2015 photograph. Josiah, who had a rare genetic disorder, died at 2 years old. Photo courtesy of Patrick Hoerter

Josiah died in 2015, about seven months after the video was taken. He lived his life with a rare genetic disorder called MECP2 duplication syndrome. It kept him from being able to talk or walk on his own. He spent a lot of time in hospitals — the family shuttling back and forth from their home in Wausau to Children’s Hospital of Wisconsin in Milwaukee.

The experience of having a child with significant disabilities was a profound stress on the family. It was also a source of real social isolation, said Josiah’s father, Patrick Hoerter. They struggled to find places in the community that they could take Josiah.

"There was no place to go," he said. "You really become kind of a hermit in the community."

When they knew Josiah was reaching the end of his life, Destiny and Patrick made a promise to him, that they would lead an effort to create a new, inclusive playground in Wausau. The same week Josiah died, Patrick spoke for the first time to a committee of the Marathon County Board about using space at a public park to create the playground they wanted to build in his memory. He went back the next month, and kept going back.

That was nearly four years ago.

In August, Destiny, Patrick and their children, ages 2 to 9, posed with shovels at the construction site, breaking ground on the project. 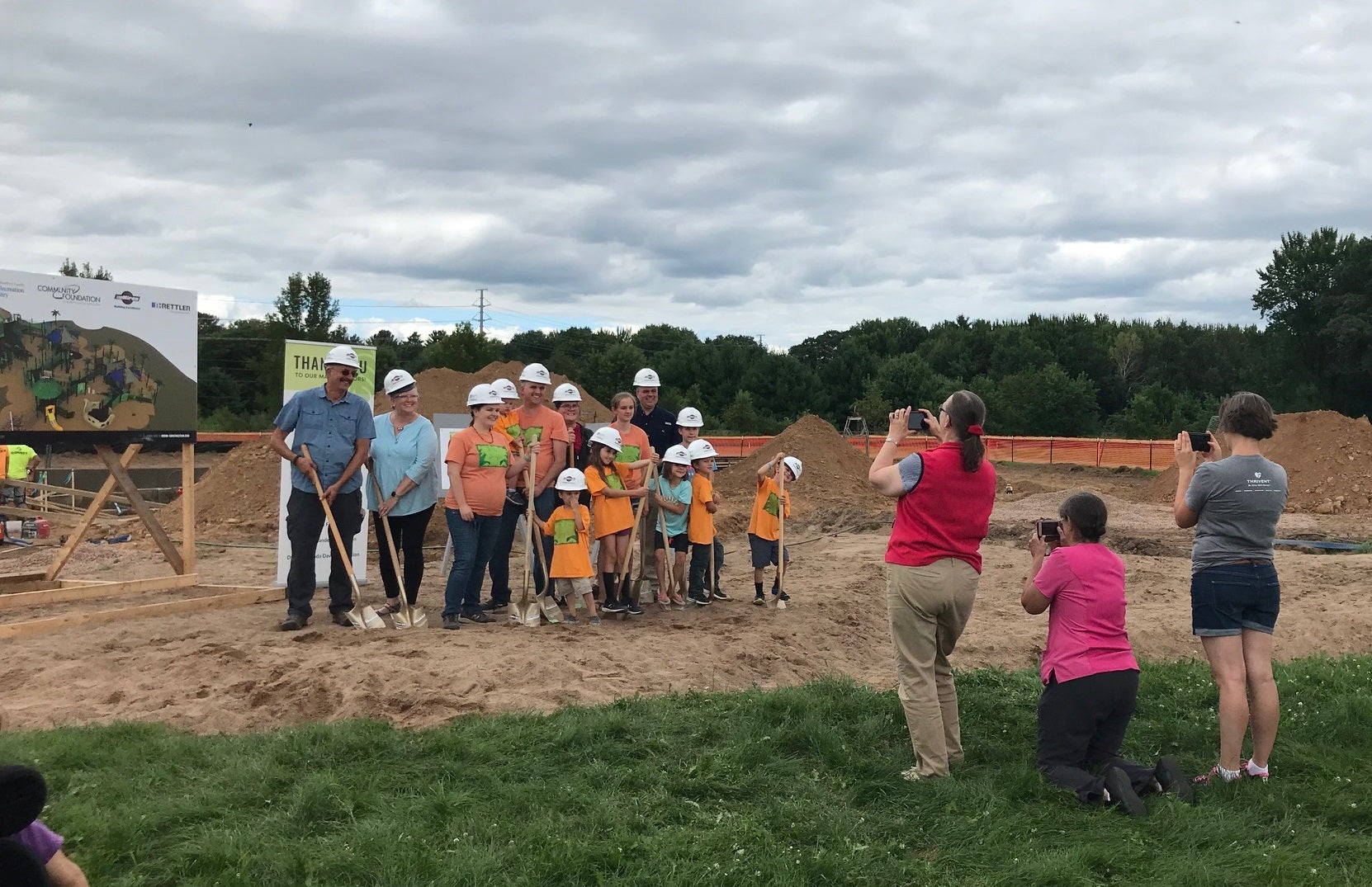 Patrick Hoerter, fifth from the left, poses with his wife Destiny and their family at an August groundbreaking event for JoJo’s Jungle. Rob Mentzer/WPR

By early October, construction on Wausau's first fully inclusive playground was well underway. It will have ramps wide enough for wheelchairs on its climbing structure. There's going to be a canopy of trees around it to keep it cool in the summer. It will have a splash pad, accessible zip lines and specialty swings for those with disabilities.

The park is named JoJo's Jungle, after the Hoerters' nickname for Josiah. They had initially hoped to have construction completed this fall, but a rainy season caused delays, and its grand opening is now planned for spring 2020. The family has sacrificed and worked through unthinkable grief to bring the project to this point. They hope it's something that brings families together, and makes children of all abilities feel welcome.

There are many design elements that make a playground adaptive for children with special needs. But one of the most important is underfoot. The great majority of playgrounds are built on sand, pebbles or wood chips. These surfaces cushion the spills children may take as they climb or run around. Playgrounds like these with handicapped parking and sidewalk ramps are likely even compliant with the Americans with Disabilities Act.

But they're not inclusive.

A poured rubber surface on the ground allows kids to take their wheelchairs or walkers anywhere in the park. For the Hoerters, one of the most important principles behind the design and creation of JoJo’s Jungle was to make it a space where children with disabilities would play side-by-side with other children.

There are at least 13 adaptive playgrounds in Wisconsin, but most of them are in the southeastern part of the state. Before JoJo’s Jungle, the only one in central Wisconsin was Stevens Point’s Kids Are Special Here park, called KASH Playground. The Stevens Point park became so popular that the city recently expanded its parking lot, the better to accommodate large numbers of visitors, including school buses that occasionally bring kids there for a field trip. The Hoerters expect that families across the Northwoods will visit JoJo’s Jungle. They say there's a hunger among parents of children with disabilities for places like it.

The Hoerters toured inclusive playgrounds in Appleton, Kenosha, River Falls and elsewhere. They studied catalogs and trade publications on playground equipment. They took meetings with manufacturers.

The project gave them something to do with their grief, and they threw themselves into it.

"During that first year, when we were designing the playground, it didn’t hit me yet that I didn’t have my son anymore," Destiny said. "I was designing that playground for him."

The family speaks often about Josiah. Their other children — Jasmine, now 9; Isaiah, 7; Micah, 6; plus Elijah, 3, and Judah, 2, both of them born since Josiah's death — all know about the project, and why the family took it on. They keep Josiah's memory with them in other, ways, too. At the end of May 2015, the Hoerters gathered with their children to sing happy birthday to Josiah and release balloons. He would have been 3.

Years Of Work, And Sacrifices, Made Project Possible

Brockmeyer Park is on the west side of Wausau, not far from the hospital campus. On the other side of Highway 29 there’s a softball complex. About five miles south is Rib Mountain State Park.

Brockmeyer is a grassy, 25-acre expanse of soccer fields and a baseball diamond. The Hoerters lived across the street. 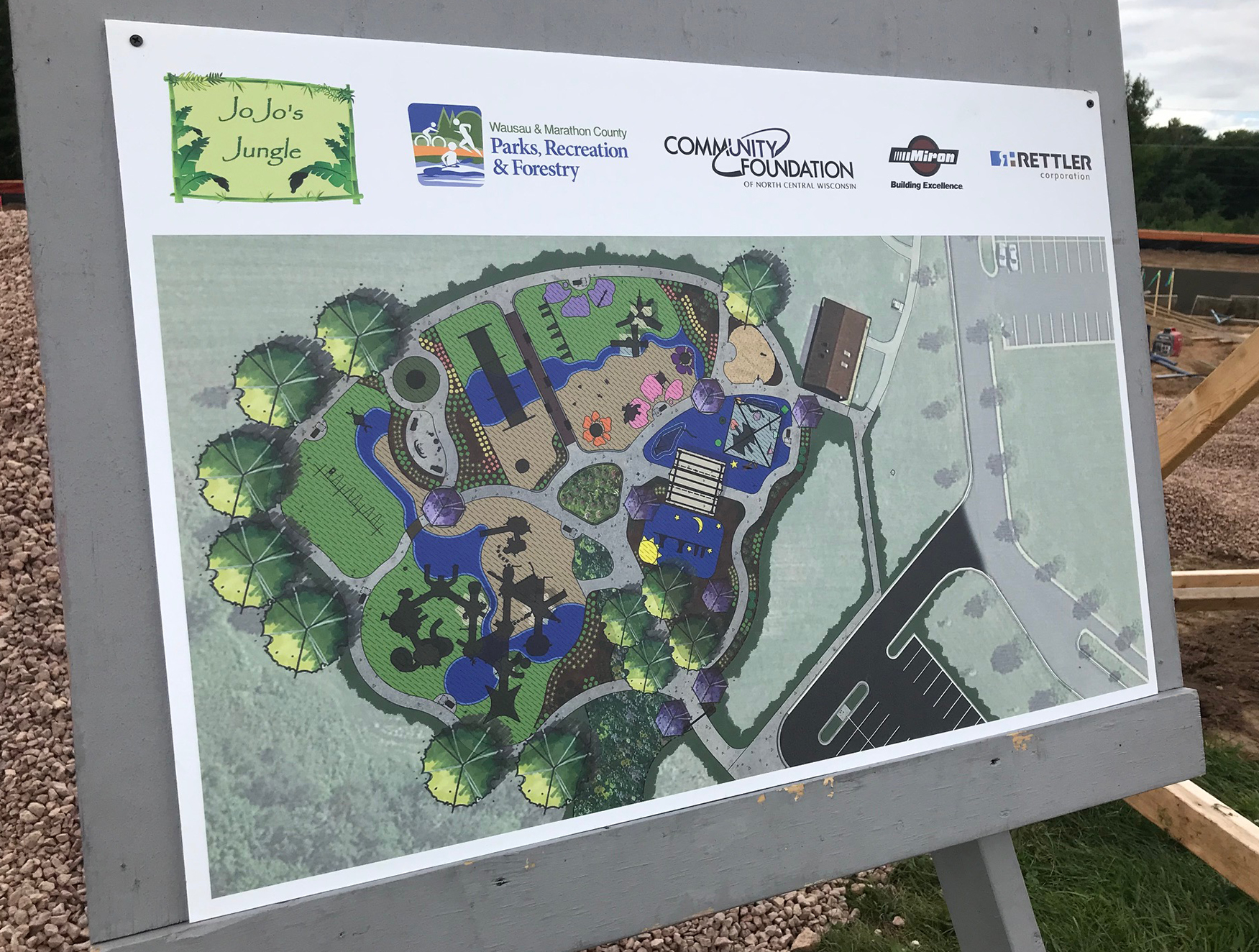 It wasn’t hard to convince the city of Wausau to make it the site for JoJo’s Jungle. But building the community support and raising the funds to create the park was hard work, practically full-time work, which Patrick had to fit around his paying job as an IT professional.

That meant raising money. Patrick became the face and the spokesman for the effort. He gave interviews to local media; he spoke to community groups and set up a website and a Facebook page for the effort. He even left his job and started his own IT company to have more flexibility.

In 2016, a local foundation, the B.A. & Esther Greenheck Foundation, announced a $1 million grant to the project. That launched fundraising — but they still needed to raise another million-plus to make JoJo’s Jungle happen. Their fundraising goal was $2.4 million.

Patrick became comfortable speaking on behalf of the effort; Destiny never did. A naturally introverted person, if she could have moved the project forward without having anyone learn her name, she said, she would have.

Four years of planning and fundraising is a long time, and there were many times they thought they wouldn’t make it. All of their efforts — and a lot of their finances — were going directly to making JoJo's Jungle a reality.

"We moved into an apartment for a year so we could have maintenance free, because we were really stalling on the fundraising and we didn’t know what to do," Destiny said. "We gave up our home that was across the street from JoJo’s Jungle."

The family had been scattered throughout Josiah’s illness, with his siblings staying at their grandparents’ homes while Patrick and Destiny cared for Josiah in Milwauee. Other times Patrick and Destiny were apart, one staying with the family in Wausau, while the other stayed with Josiah at Children's. In the year after Josiah died, the family bought a camper, resolving never to do things apart.

In April, JoJo's Jungle passed $2 million in fundraising. In a Facebook post, Patrick wrote that, with some adjustments to their initial plans, it would be enough to fund the project. He notified supporters and the city: construction would start this year.

Around the time they broke ground on the project in late summer, the Hoerters moved into a new home. There’s room for their kids, and for the baby who is due in December. Their Christian faith has sustained them in the last four years, they say. And they feel blessed to have had the support of the community

"When I was at the groundbreaking event ... everything just hit me at once," Patrick said. "All those emotions that you’ve shelved for a while come together. It’s really overwhelming."

'He Smiled Through Everything' 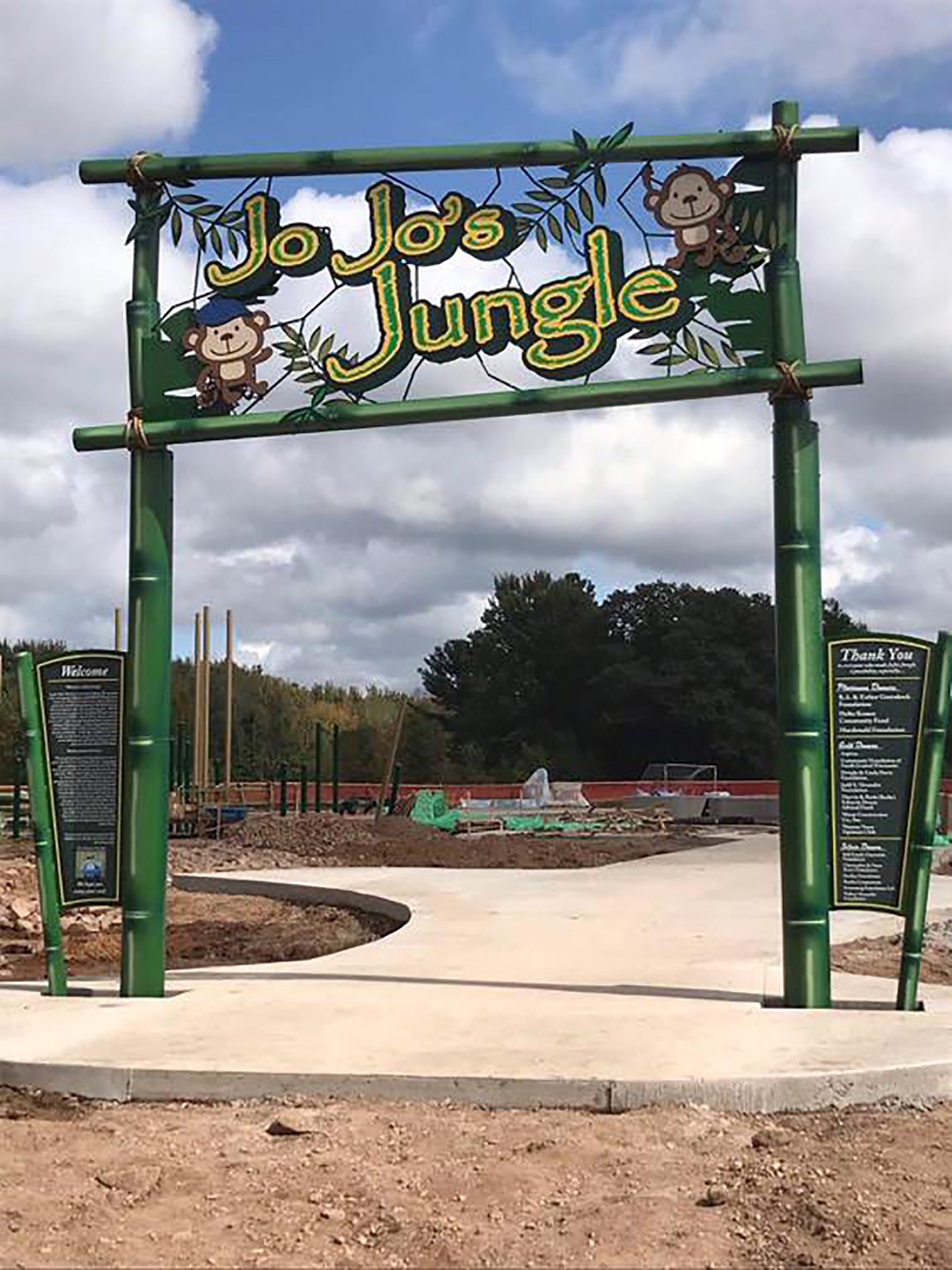 A sign delivered in September stands at the under-construction site of JoJo’s Jungle, a new inclusive playground in Wausau. Photo courtesy of Patrick Hoerter

The sidewalks are poured and a lot of the playground equipment is up at JoJo's Jungle. It’s far from finished, and the construction site is still cordoned off by plastic fencing. But a visitor to Brockmeyer Park can start to see the way it’ll be laid out.

Josiah would have liked it.

"He smiled through everything. He was always happy," Destiny said. "That's one thing we wanted to bring to the community: the legacy of his happiness."

At the end of September, Patrick posted another video on Facebook, of a truck delivering the Jojo's Jungle sign to the construction site. You can hear one of his sons in the video saying, "I see the Jojo monkey!" talking about the image on the sign of a jovial monkey greeting playground visitors. At the very end of the video clip, as it cuts off, you can hear the child’s voice say, "It's better than I imagined."