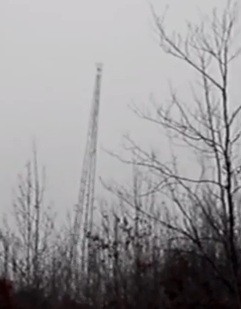 A Boom, and 400 feet of Broadcasting History Comes Crashing Down

Wisconsin Public Radio's oldest transmission tower stood near Brule in the far northern part of the state for 60 years. It came down Wednesday in just a few seconds.

One charge was set at the base of the tower and another charge was set about 10 feet high on the old WHSA tower. WPR Regional Technical Manager Steve Bauder says the 30 pounds of dynamite used blew out a 6-10 foot piece of steel causing the tower to lean in one direction.

Tower Technologies Group Owner Curtis Randecker says the original plan had to be changed when they realized the 400-foot tall tower structure was too unsafe.

Jeremiah Bakken of Tower Technologies enjoyed it all.

"It was pretty exciting. I was not expecting the noise," he said. "It was a lot louder than I thought it was going to be."

When it was over, they celebrated with brats, dogs, chips, and chili.

A new tower erected at the site this summer offers a better signal for 89.9 FM WHSA in northern Wisconsin.